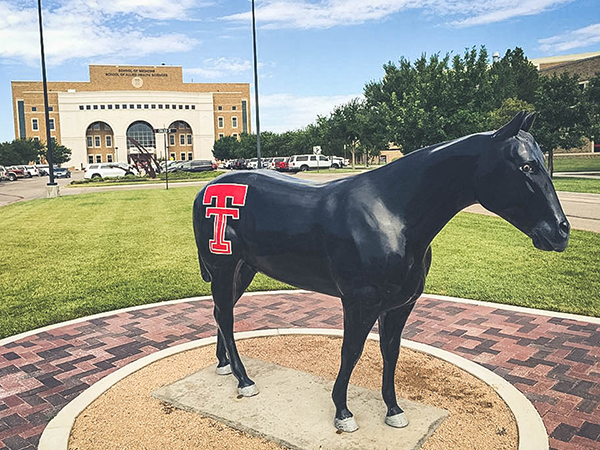 "Pride of the Masked Rider" sits at the entrance of the Amarillo campus.

When patients, students and employees approach the Texas Tech University Health Sciences Center (TTUHSC) regional campus in Amarillo, one of the first things they see is a statue of a sleek, black horse with a Double-T emblazoned on its hindquarters. Named "Pride of the Masked Rider," the TTUHSC horse is one of more than 100 similar statues scattered across the city as part of Center City of Amarillo’s “Hoof Prints of the American Quarter Horse” public art project.

Hoof Prints began in 2002 as a way for Center City to raise funds and promote art in public places, so 2017 marks the 15th anniversary of both the launch of the project and the installation of TTUHSC’s horse. The American Quarter Horse Association purchased the first 20 statues to kick-start the collection early that year, and TTUHSC purchased and installed "Pride of the Masked Rider" that fall.

“They’ve become little landmarks,” Center City of Amarillo Executive Director Beth Duke said. “Wherever they are you’ll see people taking photos with them. Finding the horses is a great way to explore Amarillo.”

The fiberglass statues are exact replicas of a full-sized American Quarter Horse, but weigh only 125 pounds. Once a horse is purchased, Center City matches the buyer with a local artist to create a design for the horse that usually honors the mission or history of the owner organization.

To create a horse for the Amarillo campus, artist Doris Alexander was paired with TTUHSC. The pairing was special for TTUHSC because Alexander didn’t just create the “Pride of the Masked Rider” statue that pays homage to the horses ridden by Texas Tech University’s Masked Rider mascot; the entire concept for the Hoof Prints project was hers. 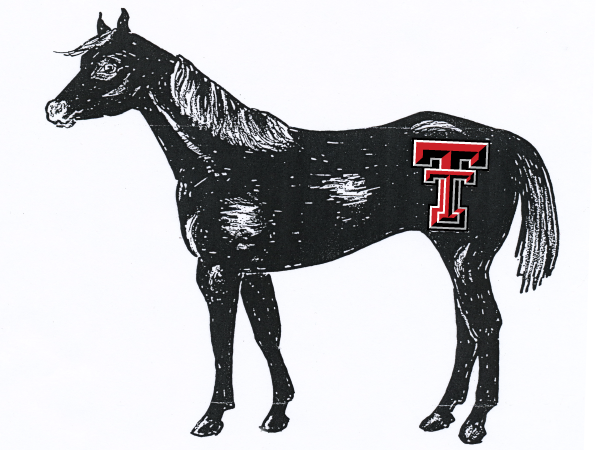 An early design was attached to the 2002 purchase order for the statue.

“She realized Amarillo needed a public art project,” Duke said. “She brought forth this idea that has made our program sustainable over all these years and allowed us to continue to ‘grow the herd.’”

Early drawings of Alexander’s design attached to TTUHSC’s 2002 purchase order for the statue show a black horse emblazoned with the current version of the Double-T logo, with more white and gray details than previous versions. However, sometime during the design process the logo design was changed to use an earlier, simpler version of the Double-T.

Alexander also included light gray hair on the statue’s mane and tail when it was originally installed, but the hair was repainted solid black a few years later when “Pride of the Masked Rider” required some artistic grooming.

Duke said Alexander is an amazing advocate for the arts who has served on the Texas Commission on the Arts. She has also chaired several committees tasked with reviewing proposals for the Texas Tech University System’s (TTUS) Public Art Program that is responsible for selecting other artworks for display on the Amarillo campus.

“Pride of the Masked Rider” is not an official part of the TTUS Public Art Program, but it does complement the dozen pieces in the collection on display in Amarillo.

Following installation, statue owners are responsible for the ongoing maintenance of their artwork. After the initial repainting, TTUHSC now applies a new clear coat periodically. “Pride of the Masked Rider” has also been relocated a few times. It was initially installed on the northeast corner of campus in front of the School of Pharmacy building, but then had to be moved in 2007 when construction began on the Pharmacy Academic Center. It was then shifted between several other locations near the center campus entrance on Coulter Street until 2012 when benches and a courtyard were installed around the area where it stands today. 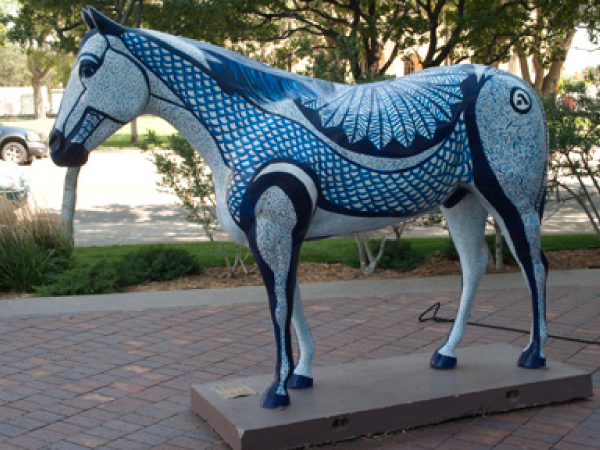 Amarillo National Bank's "Old Blue" was the first statue in the collection.

The Hoof Prints program shows no signs of slowing down. In fact, six new horses have been purchased during the last year.

“We never imagined it would go on this long,” Duke said. “As long as people are interested, our board and volunteers want it to continue.”

To learn more about the Hoof Prints of the American Quarter Horse collection, visit the virtual guide on Center City of Amarillo’s website or email info@centercity.org to request a printed map be mailed to you.