A Legacy of Research and Service 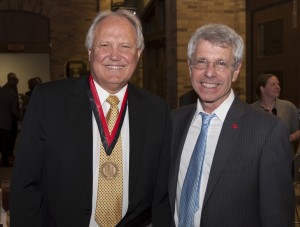 
Douglas Stocco, Ph.D., tenured professor in the Department of Cell Biology and Biochemistry, was honored for 40 years of remarkable service to the Texas Tech University Health Sciences Center. A native of Canada, Dr. Stocco began his career at TTUHSC in 1974 when he joined the Department of Cell Biology and Biochemistry. Dr. Stocco, and his wife, Kathy Stocco, were recognized at a reception hosted by Executive Vice President, Provost and School of Medicine Dean Steven Berk, M.D. As a testament to and appreciation of his invaluable contributions to the enhancement of research efforts at TTUHSC, the event was well attended by faculty, students and staff.

“Dr. Stocco’s contributions to research have earned him the utmost respect from his peers,” Berk said. “His work and leadership also has impacted generations of the many students and faculty who have worked with him through the years.”

Tedd L. Mitchell, M.D., president of TTUHSC, celebrated Dr. Stocco’s tenure at TTUHSC by saying that “no individual better exemplifies the commitment to excellent research and the discovery of new knowledge.” He thanked Kathy Stocco for her enduring support and important role she played in Dr. Stocco’s success as well as her own contributions to the Lubbock community.

A highly productive researcher, the National Institutes of Health (NIH) has funded his work since 1984. Dr. Stocco’s research has focused on the mechanisms involved in steroid hormone synthesis. His achievements include the identification and characterization of a novel protein, which his laboratory named the Steroidogenic Acute Regulatory, or StAR, protein.

Dr. Stocco was a model institutional citizen, never refusing to serve in any role or meet any challenge that was asked of him. In 2008, he was named executive vice president for research and, in 2010, he was asked to assume the additional role of dean, graduate school of biomedical sciences. Most recently, Dr. Stocco served as interim chair in the Department of Cell Biology and Biochemistry following the sudden death of Dr. Harry Weitlauf. 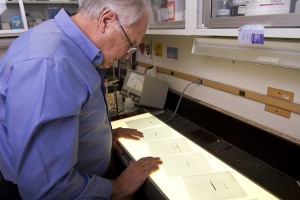 Dr. Stocco's research achievements include the identification of a novel protein his laboratory named the StAR protein.
In recognition of his distinguished service as an academician and researcher, Dr. Stocco was the recipient of numerous national and international honors and awards. In 1985, he received the National Institutes of Health Research Career Development Award. This was followed by the NIH Merit Award in 1996. In 1997, TTUHSC bestowed the Grover E. Murray Distinguished Professorship, the highest distinction a faculty member can attain. That same year, he was awarded a University Medical Center Endowed Chair, the research award from the Society for the Study of Reproduction, and the Achievement Rewards for College Scientists Distinguished Scientist Award. These were followed by the Robert A. Welch Endowed Chair in Biochemistry in 1998. In 1999, the British Endocrine Society presented him with the he Transatlantic Medal Award. In 2001, he was named a Raine Distinguished Professorship at the University of Western Australia. In 2003, TTUHSC honored him with the University Distinguished Professor award and the School of Medicine further honored him by renaming the Dean’s Faculty Excellence in Research Award, the Douglas M. Stocco Scholarship/Research Award. In 2005, Dr. Stocco received the Dean’s Research Award, the President’s Research Award, the Chancellor’s Council Distinguished Research Award and was elected a Fellow of the American Association for the Advancement of Science. In 2009, Dr. Stocco received the Distinguished Scientist of the Year Award from the Society for Reproduction and Fertility in the United Kingdom. In acknowledgement of his outstanding research career and scholarly activities in reproductive biology, Dr. Stocco received the Carl G. Hartman Award, the highest honor bestowed by the Society for the Study of Reproduction, in 2012.

Dr. Stocco was widely published with more than 200 peer-reviewed scientific articles, book chapters and abstracts. He was an invited guest presenter at numerous national and international conferences.

“Dr. Stocco’s contributions to research have earned him the utmost respect from his peers,” Berk said. “His work and leadership also has impacted generations of the many students and faculty who have worked with him through the years.”