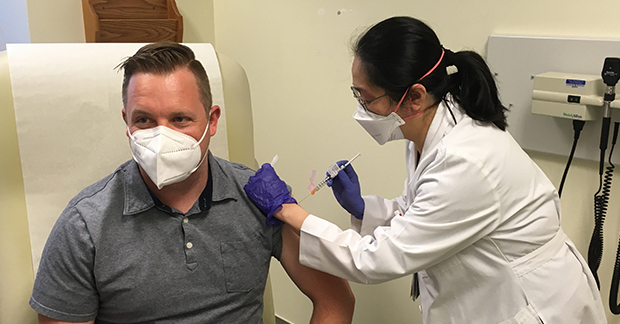 As the needle delivered the first-ever dose of SchistoShield® vaccine into the waiting arm of a human being, its developer, Afzal A. Siddiqui, Ph.D., director of the Center for Tropical Medicine and Infectious Disease and chair of the Department of Immunology and Molecular Microbiology at the Texas Tech University Health Sciences Center (TTUHSC) School of Medicine, was simultaneously filled with joy and fear and other feelings that were new to him.

“You are very happy that what you have done has reached a stage where it could, if it works, help a lot of people,” Siddiqui described. “And you are also scared because you are responsible for putting this into humans, so you have to believe 100% in your studies and in your research.

“I think it was the kind of feeling which I never experienced before, the feeling of satisfaction as a scientist because that's what we shoot for: to take things from bench all the way to bedside. And this is one of the few examples where I have, with the help of so many different people, brought something from concepts that are tested in laboratory animal models to human beings.”

Primarily found in sub-Saharan Africa, the Middle East, Southeast Asia and the Caribbean, schistosomiasis is second only to malaria as a deadly tropical parasitic disease. Also called snail fever, schistosomiasis is caused by parasitic flatworms known as schistosomes that inhabit contaminated fresh water. When a person comes into contact with contaminated water, the schistosomes access the human bloodstream through the skin, and then most often make their way to the urinary tract or the liver and intestines where they cause symptoms such as abdominal pain, bloody stools, diarrhea and blood in the urine.

Long-term schistosomiasis can lead to liver damage, kidney failure, infertility, bladder cancer and death. It also can lead to increased vulnerability to many sexually transmitted diseases, including HIV.

An estimated 250 million people are currently infected with schistosomiasis and approximately 800 million more are at risk in the 79 countries where the disease is considered to be endemic.

Currently, there are no commercially available vaccines against schistosomiasis. The World Health Organization (WHO) lists praziquantel, which was developed more than 40 years ago, as the only effective drug treatment, though re-infection frequently occurs following its use. 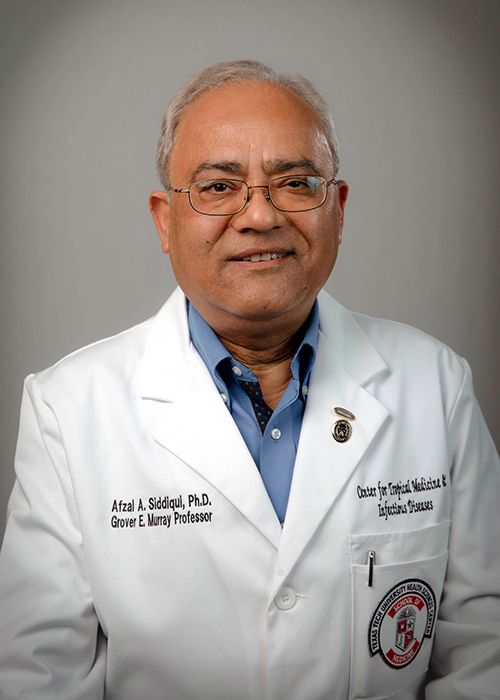 Siddiqui, a Grover E. Murray Distinguished Professor in TTUHSC’s School of Medicine, began his quest to develop a schistosomiasis vaccine in 1991. With funding from the National Institutes of Allergies and Infectious Diseases (NIAID) at the National Institutes of Health (NIH) and the Thrasher Foundation, he began conducting bench studies and pre-clinical development of what was known as the Sm-p80/GLA-SE schistosomiasis vaccine, which would eventually be branded SchistoShield®.

In 2014, Siddiqui became the first at TTUHSC to secure funding from the Bill & Melinda Gates Foundation, which he used to conduct proof of concept studies on Sm-p80/GLA-SE. As his march toward a viable vaccine picked up momentum, Siddiqui also became the first TTUHSC investigator to receive funding from the European Union’s Vaccine Against Schistosomiasis for Africa (VASA) Program, the United Kingdom’s Wellcome Trust and South Korea’s RIGHT Fund.

“All of the major funders in the world have been convinced by our data, by our work, that this is something they would like to pursue with us and develop,” Siddiqui said. “It was a struggle to get the funding, and I think the major thing was once we had the funding, the progression of development was pretty smooth and fast.”

Since he first began working on a schistosomiasis vaccine, one of Siddiqui’s fundamental goals was to develop a treatment that would be produced for humanitarian purposes rather than profit. In fact, when current Texas Tech University System Chancellor Tedd L. Mitchell, M.D., was serving as TTUHSC president, he, TTUHSC School of Medicine Dean Steven Berk, M.D., and Siddiqui convinced others within the system to do the project as a humanitarian effort.

The NIH also played a major role in supporting Siddiqui’s humanitarian goals through its Small Business Initiative, which provides funding to small businesses conducting such efforts. Siddiqui said he also was lucky to cross paths with PAI Life Sciences, a Seattle-based company with an interest in neglected tropical diseases.

“With PAI we got more than $10 million in funding from the NIH over the last 10 years to do this work, so they were really the engine which moved this further,” Siddiqui said. “And then the Bill & Melinda Gates Foundation came along, and once you have the Gates Foundation, then everybody comes together.”

To maintain the humanitarian effort, Siddiqui in 2016 received a patent for SchistoShield® in several countries. He took another important step in February 2018 when he signed TTUHSC’s first-ever license agreement related to SchistoShield® with PAI Life Sciences. The company has worked with Siddiqui since that time to meet certain Gates Foundation requirements, such as conducting critical translational experiments in non-human primates.

In those initial experiments, SchistoShield® demonstrated it could kill adult schistosomes and significantly reduce their ability to lay eggs and reproduce. Once those trials proved successful, other entities such as Quratis, a biopharmaceutical company in South Korea that specializes in vaccine development and also receives support from the RIGHT Fund, were added to the team to help expand the project.

During the Phase 1, open-label, dose-escalation trial, Siddiqui, PAI and others will evaluate the vaccine’s safety and the immunogenicity in 45 healthy adults between the ages of 18 and 55 years. Lisa Jackson, M.D., MPH, is principal investigator for the Phase 1 study, which is being sponsored by the NIAID/NIH. Jackson is a senior investigator for Kaiser Permanente Washington Health Research Institute and will complete her investigation at that facility, which is an NIAID-funded Vaccine and Treatment Evaluation Units.

After Phase I trials in the U.S. and Phase 1b trials in Madagascar and Burkina Faso in Africa, Siddiqui said vaccine efficacy trials in schistosome human challenge models in The Netherlands and Uganda (Africa) will begin in 2023. He and PAI are currently working out plans for Phase 2 trials with the Bill & Melinda Gates Foundation, which he expects to be in place by the coming fall.

Heading for the Finish Line

If everything goes according to plan during the Phase 1, Phase 1b, Phase 2 and human challenge models, licensing the vaccine could be accelerated. Siddiqui said that means the vaccine could be ready for distribution through WHO, Gavi (the Vaccine Alliance) and other nonprofits in five to 10 years. The vaccine’s performance during efficacy trials will be a key factor in firming up that timeframe.

“It's a long process; it takes decades to find out the effect of the vaccine in these kinds of situations because we're talking about places like Africa [where] you not only have this disease, but you have so many others,” Siddiqui said. “You see those kids with bulging bellies; they are carrying not only one, but several parasites. We are trying to fix one, but there are others, so unless you fix all of the other parasites with vaccines or some other approach, we wouldn't know the real impact. But we are getting into this process where, little by little, we're trying to eliminate these diseases as we get more resources to gain more knowledge.”