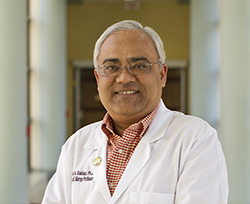 Siddiqui has dedicated his career to learning all about it and to developing a treatment.

The HSC on Thursday announced a license agreement with PAI Life Sciences, Inc. to further develop a vaccine to treat it- the first such agreement in the university’s history.

“For us, this is hugely significant for a couple of reasons,” said HSC President Dr. Tedd Mitchell. “No. 1, this is, from Dr. Siddiqui’s perspective, purely humanitarian.”

Siddiqui has been working closely with Darrick Carter, founder of PAI Life Sciences and a biochemist, through the process of developing the vaccination. He received a patent for SchistoShield in 2015 and a $3.82 million grant in 2016 from the National Institutes of Health to move forward with clinical trials, according to A-J Media archives.

“The way the vaccine is designed is it has a protein, which I discovered, and then it has an adjuvant, which enhances a certain type of response (from the body) that Darrick (Carter) discovered,” said Siddiqui, also vice chair (research) in the department of Internal Medicine and director of the center for tropical medicine and infectious diseases for the HSC School of Medicine.

The agreement gives licensing rights to PAI Life Sciences, Inc. to carry the vaccination, and Siddiqui’s protein, through human clinical trials in the United States, he said.

PAI Life Sciences, Inc. is a biotechnology company based in Seattle, Washington, that Darrick Carter created 14 years ago. One of its focuses is neglected tropical diseases, like schistosomiasis, Carter said.

Mitchell described schistosomiasis as a “huge problem” - but not something generally heard about in the United States, Canada or Europe.

Siddiqui said the disease is more prevalent in places like Africa.

“I grew up in India where most of these infections are fairly common,” Siddiqui said.

He’s personally witnessed the impact of a parasitic infection for which there is no treatment or few treatments. By creating SchistoShield, Siddiqui simply wants to help.

In January 2016, “Science,” a journal by the American Association for the Advancement of Science, ranked schistosomiasis seventh in a list of 10 shots ranked in order of research and development priority.

The only treatment currently available for schistosomiasis is called praziquantel, Siddiqui said. SchistoShield would be the first vaccination of its kind used specifically to treat the disease.

The SchistoShield vaccine was not created to cure schistosomiasis, Siddiqui said. It’s intended to at least lessen the symptoms.

An estimated 800 million more people are at risk of contracting the infection, he said. If successful, the vaccine could potentially rake in hundreds of thousands of dollars, maybe more.

“We got the patent because we didn’t want other people to make money off is because then people who need it won’t be able to afford it,” Siddiqui said. “We did all that for humanitarian reasons. The vaccine is licensed to a company and we are not going to take a cent in profit.”

He wants to keep the cost affordable for populations that really need the vaccine, he said.

Mitchell said he admires Siddiqui’s choice to decline profit. When asked if HSC would accept any profit in the future, Mitchell didn’t hesitate to say no.

But if any money from the vaccine does make its way to HSC or Siddiqui in the future, it will go specifically toward supporting research at the university, he said.

“We are all very, very proud of Dr. Siddiqui and very excited,” Mitchell said. “This is kind of a capstone for the work he’s been doing.”

Carter said the clinical trials for SchistoShield will include multiple phases and could take several years. He and Siddiqui hope to start them in early 2019.

The process usually takes an average of 20 years from the time a drug enters clinical trials to the time it’s approved, Carter said.

They hope to receive approval and begin marketing SchistoShield within the next 10 years - assuming the clinical trials are successful.

Siddiqui said the vaccine has shown promise in various animal subjects so he’s optimistic but remains cautiously so.

“In science, you don’t know what’s going to happen,” he said.

He’s been studying schistosomiasis since the 1980s and published his first paper in 1991, he said. The road up to this point hasn’t been easy.

Finding funding wasn’t easy, he said. He remembers submitting applications for 17 different grants before he received his first funding. Since then, Siddiqui’s work has been funded through the National Institutes of Health, the Bill & Melinda Gates Foundation and a handful of others.

Siddiqui said he never dreamed his work would lead to this step. He’s thankful to the countless mentors he’s had and he feels a lot of personal satisfaction and hopeful anticipation for the future.

“I’m really very happy that I was able to do it from here and see how it all comes together in the next couple of years. It only took me 27 or 28 years,” he said with a laugh.