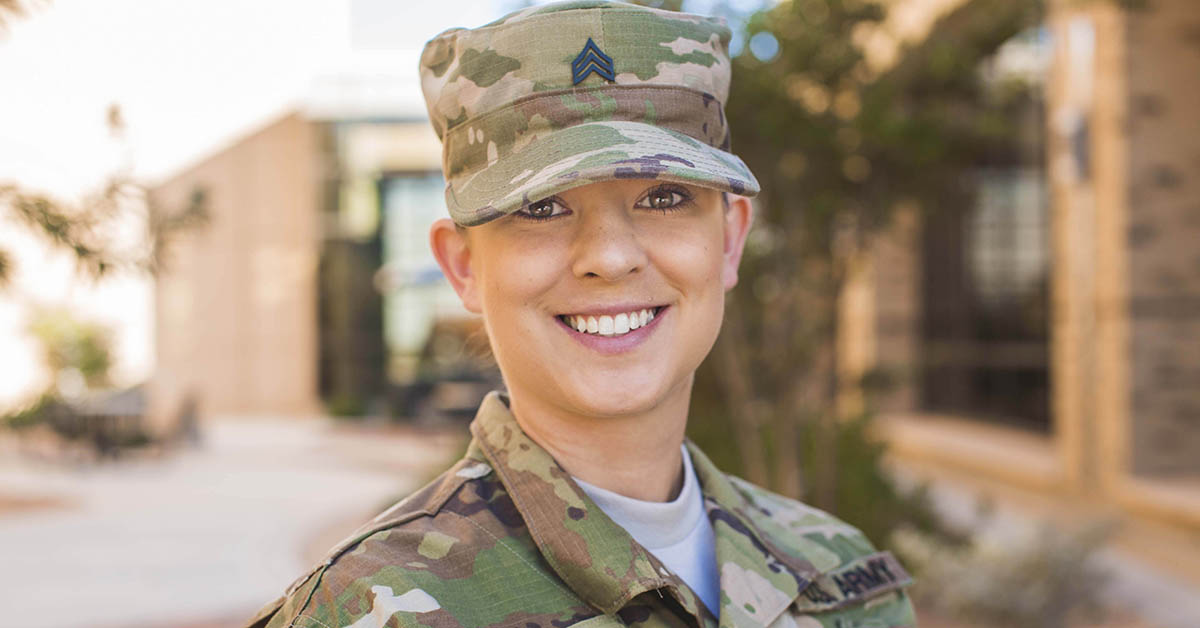 “I lost a sister to cancer,” Grant said. “The nurses that helped her had a huge impact on me. I didn’t know there were medical options when I joined, but I became a medic. It’s been a rewarding experience, helping the people serving next to me and those who can’t help themselves.”

Grant is currently enlisted in the Army National Guard and was activated by the National Guard to report to Beaumont, Texas after Hurricane Harvey hit the coast.

“They called us into full activation on August 28,” Grant said. “We had an hour’s notice to leave and report to our post. When we got to Beaumont, there was no running water, and flooding between Beaumont and Huntsville had left stores and homes full of water. We had to set up as our own emergency department.”

Her squad continued to set up a triage station, giving acute care to those who needed it. Harvey is the first major hurricane to make landfall in Texas in 56 years. The storm had 130 mile-per-hour winds and dropped more than forty inches in some areas.

“One thing I remember was a gentleman bought us more than 160 cases of water,” Grant said. “We were exhausted. What he did was overwhelming. We were going to help, but the people were taking care of us while we were taking care of them. We take care of ourselves last, so we aren’t expecting someone to help us when we are there to help.”

While it can be difficult to serve while in school, Grant was backed by the faculty of the School of Nursing to help with cleanup without the fear of being left behind in her classes.

“The School of Nursing was 100 percent supportive of me when I went to the coast,” Grant said. “My professors just wanted me to get home safe and to not worry about school while I was there. I couldn’t take a computer, and I didn’t have any Internet access while I was there, so doing schoolwork would have been incredibly difficult. While I was in Beaumont, they really helped me put all my energy into my duties. They allowed me to put my mission first without the additional stress of schoolwork. Other students at other universities didn’t have nearly the same support as I did from TTUHSC.”

“TTUHSC faculty and staff are committed to assisting military students,” Sykes said. “We are very proud of each of our military and veteran students and the contributions they make to ensure our friends and families are protected. Our faculty reviewed the activities the military students were providing during this crisis to determine how the services aligned with specific course assignments. Students were awarded credit for assignments and clinical hours based on their fulfillment of course objectives while serving. Faculty eagerly volunteered to spend extra time in creating alternative pathways for our students to continue their coursework without getting behind. TTUHSC School of Nursing faculty are to be commended for their efforts in ensuring our military students continued to be successful while serving during this crisis.”

Grant wants to continue her service, focusing on becoming a pediatric nurse, a dream she had since her little brother was born and placed in the neonatal intensive care unit.

“It takes an entire community to care for children,” Grant said. “I love kids, and I love working with them. They can’t help when they are sick or when they aren’t feeling well. Their stories really tug on the heart strings. It’s about loving what you’re protecting.”

Grant is finishing her studies and is expected to graduate in December, receiving her BSN in three semesters. She believes her military training has helped her excel in the VBSN Program.

“The situations in the military are uncontrolled field settings,” Grant said. “That training has helped me stay in the correct mindset while I work in more controlled environments. The best part of TTUHSC is that they have acknowledged all of my training in the Army. A lot of places say they are military-friendly, but TTUHSC really backs it up. They stand behind their military students. When they say it, they mean it.”