Adult stem cell research on the TTUHSC campus in Amarillo received a boost with the September arrival of Hiranmoy Das, Ph.D. 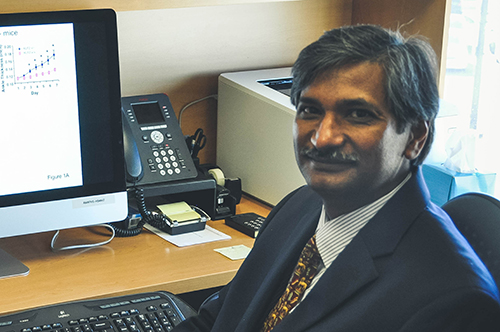 Das, a professor for the School of Pharmacy’s Department of Biomedical Sciences, focuses his research on isolating and expanding a variety of human adult stem cells and using them for the treatment of various degenerative diseases in preclinical models like hind limb ischemia, myocardial ischemia, osteoporosis and wound healing.

Stem cells, Das explained, are cells in the body that have distinct characteristics of self-renewal, multi-potential differentiation capabilities and regeneration. Though there are three types of stem cells—embryonic, induced pluripotent (IPS) and adult—Das’ lab uses adult stem cells exclusively.

Sanjay Srivastava, Ph.D., associate dean for the Office of Sciences at the School of Pharmacy, said Das’ stem cell research supports and complements research being conducted by other Amarillo science faculty, including Abraham Al-Ahmed, Ph.D.

“Adult stem cell research is an exciting area,” Srivastava said. “There is a possibility that these cells can be used to treat damaged cells of the heart and cornea and also treat arthritis and the loss of bone density and mass.” 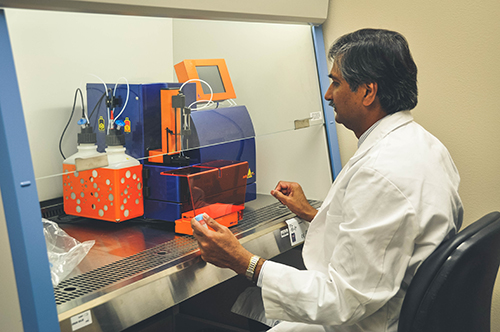 Das at work in the lab.

Das earned his Ph.D. from Calcutta University in West Bengal, India. He received his postdoctoral training from Hyogo Adult Medical Center in Hyogo, Japan, and from the Department of Internal Medicine at Boston’s Brigham and Women’s Hospital, a Harvard Medical School affiliate. Prior to his arrival at TTUHSC in Amarillo, Das served as an associate professor for the Department of Internal Medicine at The Ohio State University and as an assistant professor for Case Western Reserve University’s Cardiovascular Research Institute in Cleveland.

Das, currently a National Institutes of Health (NIH) R01-funded investigator, has authored more than 45 articles for peer-reviewed research journals. He has also penned 10 book chapters and received two patents. He serves as a member of the editorial board for several peer-reviewed journals and serves on the grant review panels of various state, national and international funding agencies. He is currently working on research that uses three types of adult stem cells, including:

Das said he and his collaborators are working on a pipeline of technologies that are at various stages of development.

“Our goal is to regenerate damaged or diseased tissues and cure patients,” he stressed. “Stem cells have the potential to heal and regenerate tissues and they can also provide a platform for studying healing mechanisms that might lead to pharmaceutical applications. We are always looking for collaborators—both basic research and clinical—as well as donors to help us translate this technology from the bench to the bedside.”