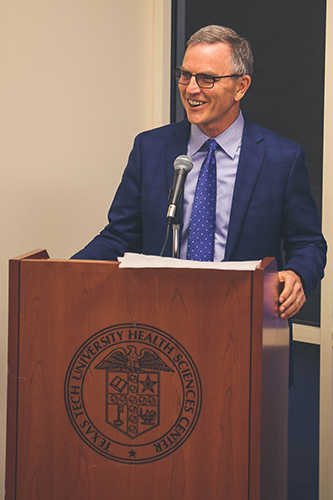 The TTUHSC campus in Amarillo said good-bye to one of its most popular and well-respected faculty members at a reception held Jan. 4. Roger Smalligan, M.D., regional chair of Internal Medicine, has accepted the regional dean position at the University of Alabama at Birmingham’s Huntsville, Alabama campus. Accepting this opportunity will allow Smalligan to be closer to family and to advance to the next level of his career.

“I have absolutely loved my time here at TTUHSC-Amarillo and I will miss the wonderful people, both at the university and within the community,” Smalligan said. “It has truly been a privilege to work with everyone on the Amarillo campus and I will never forget my time at TTUHSC. God has blessed me with so many friends and fond memories and I couldn’t ask for a better group of colleagues or better bosses in Dr. Jordan and Dr. Berk.”

During his tenure in Amarillo, Smalligan was recipient of the prestigious Dean’s Educational Innovation Award in 2011. His department won the Most Published Department in 2012, 2015 and 2016 and he was named the School of Medicine’s Most Published Faculty Member in 2013. In addition, Smalligan’s internal medicine trainees were recognized six times as the Department With Most Abstracts Presented. During his time at TTUHSC, he also served as the Potter and Randall County Public Health Authority. 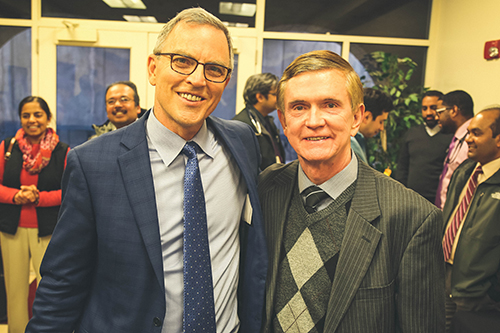 “Dr. Smalligan has had a wonderfully successful career at TTUHSC and in Amarillo,” Jordan said. “The department under his leadership and following his example has thrived academically
and financially. He enjoys immense respect from fellow faculty, administrators, trainees and medical students and he made great contributions to Texas Tech during the seven years he worked here. We are immensely proud of his promotion to regional dean at an excellent university and we all wish him the very greatest success. He and his family will be dearly missed.”