A Doctor and an Officer: Graduate Receives Military Commission 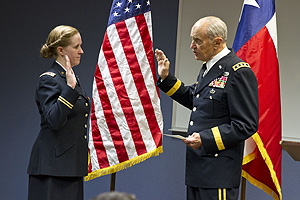 Mittemeyer, a retired lieutenant general and former surgeon general of the U.S. Army, presented Roberts with her oath during the ceremony.

“I, Amanda Roberts, do solemnly swear that I will support and defend the Constitution of the United States against all enemies, foreign and domestic, that I will bear true faith and allegiance to do the same; that I take this obligation freely, without any mental reservations or purpose of evasion; and that I will well and faithfully discharge the duties of the office upon which I am about to enter; So help me God.”

Amanda Roberts stood proudly as Bernhard T. Mittemeyer, M.D., presented her oath during her commissioning ceremony as an army officer. Roberts completed her degree through the Health Professions Scholarship Program.

“With our profession, especially when in uniform, we treat patients that are serving their country and many are far away from home,” Mittemeyer said. “Our patients have signed on the dotted line I will die for my country that is the duty. Many say honor should be first, but honor is in the middle because it is the eagle, it supports duty and country. Without honor, the other does not exist.”

Richard Lampe, M.D., chairman of the Department of Pediatrics and retired colonel in the U.S. Army, observed that Roberts had four generations present, her grandmother, mother, and her son. 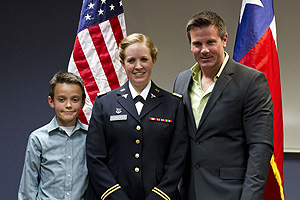 Roberts' husband and son pinned her uniform with her new rank at the ceremony.

“What a tradition Amanda has entered,” Lampe said. “Many times soldiers encounter conditions that target the skin. Amanda, who will be a dermatology resident at the San Antonio Military Medical Center, will be treating soldiers, family members and retired military from all over the world. She has a particular interest in burn research and San Antonio is the home of the only Department of Defense (DOD) Burn Center, the Army Burn Center.”

After Roberts’ husband and son pinned her uniform with her new rank, she thanked her classmates who attended along with her family and faculty.

Mittemeyer said Roberts would take care of active duty people and their families.

“When you see her in uniform, take pride for her because you know she is serving her country,” he said.