'Play It Forward' Hits the Right Note for Charity 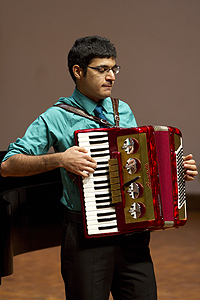 MusiCare was founded to emphasize the unification of two passions that each member shares, music and health care.

For the second year, MusiCare, a group of students who use music as a way to give back to the community, hosted “Play It Forward,” a recital of classical and pop music performed by faculty and students. The event raised $6,205 for local charities.

MusiCare, founded three years ago by a group of music-loving medical students, has grown to more than 30 students and now includes students from all TTUHSC schools. The group was founded to emphasize the unification of two passions that each member shares, music and health care.

Asha Davidson, second-year medical student and MusiCare president, said Play It Forward is one way to continue the tradition among TTUHSC students and the community.

“MusiCare grows musicians by bringing them together,” Davidson said. “This event is one way to bring music performed by our students and faculty to the community.”

Proceeds from this year’s recital benefited the American Cancer Society, Hope Lodge Lubbock and the J.T. and Margaret Talkington Supportive Care Unit at UMC Health System. Donations were accepted internally and as admission to the event.

“Dr. Harry Weitlauf, who was the chairman of the Department of Cell Biology and Biochemistry for more than 30 years, was such a wonderful professor and meant so much to the medical students,” Davidson said. “We wanted to give back to something that was close to his heart which is the Hope Lodge. We’re also excited that the J.T. and Margaret Talkington Supportive Care Unit will be using our donations to build a music library for the patients staying there. Music therapy can bring comfort to those who are in palliative care.”

Watch clips of the performances: