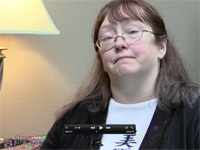 Bratcher credits the Combest Center staff for giving her back her life.

Deborah Randolph Bratcher has been a Combest Center patient for 11 years. Bratcher was a teacher in Lubbock for 17 years until a series of chronic and debilitating illnesses forced her to stop working and she lost her health benefits.

“I had always been pretty healthy, but I had struggled since childhood with depression,” Bratcher said. “In 2001 I was diagnosed with major depression, which changed my life quite a bit, and I had quite a bit of anxiety.”

Bratcher said she ended up going to the hospital for a while. It was there she was assigned a caseworker that suggested Bratcher get a physical at the Combest Center.

Nurse practitioners discovered Bratcher had pre-diabetes and vertigo, a balance disorder that can cause dizziness, nausea and trouble standing or walking.

Since she has been receiving health care at the Combest Center, Bratcher said her life has improved dramatically.

“I don’t think I would be here today if I didn’t have access to the Combest Center,” Bratcher said. “When I first came there, I was not very healthy and I was in a dangerous space, and they connected me to the people that helped save my life.”

She added, “I know that my life would not be as comfortable and meaningful if they wouldn’t have helped connect me to a group of people that helped my life balance out again.”

Although Bratcher is not yet allowed by her doctor to get a part-time job, she said she keeps herself busy by doing volunteer work in the community and through her church. She has previously held offices with the Combest Community Alliance, and still attends board meetings and votes on measures to improve performance and civic engagement.

“I never knew a lot about not having access to health care until I was having trouble accessing it,” Bratcher said. I don’t take it for granted anymore. I consider myself fortunate to have the health care I have now. I want to make sure everybody in Lubbock has access to quality health care.”

Mary Garibay, of Lubbock, said she there was a time in her life where she was in so much pain that she didn’t want to live anymore.
“My back pain and my sciatic nerve had caused so much pain on my right side, that it was just so painful I couldn’t sleep at night,” Garibay said. “I tried over-the-counter stuff – nothing worked.”

But she said she believes it was an angel who guided her to call the staff at the Combest Center for help.

“I’m walking because of them,” Garibay said. “The doctor told me that I’d end up in a wheelchair. But I try to stay active and I try to help as much as I can – help my friends.”

Garibay said her favorite way to show her appreciation to the health care providers at the Combest Center is to use her love of baking to fix the staff all kinds of goodies including pumpkin bread and banana-nut bread.

“I try to give something in return,” Garibay said. “I feel so blessed and everyone has been so kind to me.” 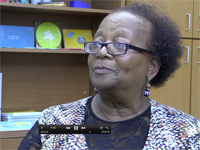 Nathan has found a medical home at the Combest Center.

When Jeanette Nathan moved back to the Hub City several years ago, she didn’t have a place to go for health care.

At the time, she said she needed to pull together a health team that included a kidney specialist.

“My mother suggested that I come [to the Combest Center],” Nathan said. “Larry Combest was able to show me how to use their resources. Also, they have a program here where they can help you get some of your medications free directly from the manufacturer, and that was very helpful to me.”

Although Nathan has since retired and lost her health insurance, she said she, like others in her situation, is fortunate to still have a medical home at the Combest Center.

Nathan said she enjoys being an active member of the Combest Community Alliance so that she can advocate to others about the ever-expanding number of programs available at the Combest Center.

“I’m always interested in trying to find out ways that I can help as one person in one effort to make sure that the community health centers in this area stay viable and sustainable,” Nathan said.