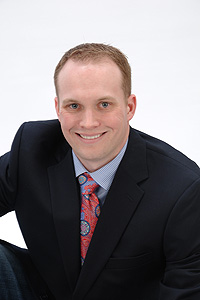 Ray is currently studying to become a pediatric neurosurgeon.

Gov. Rick Perry has announced the appointment of Coby Ray as the new Texas Tech University System student regent for 2014-2015.

Ray, a dual degree student in the joint M.D./MBA program between Texas Tech and TTUHSC, becomes the ninth student to serve on the Board of Regents. His one-year term begins June 1.

“Coby has been a proven leader during his time at the Texas Tech University Health Sciences Center,” Chancellor Kent Hance said. “He previously earned his master’s degree from the Rawls College of Business, and I know he will do an outstanding job representing the students from each of our component institutions.”

Ray, a native of Plano, Texas, received his bachelor’s degree in sports management from the University of North Texas in 2008. He earned his MBA from Texas Tech in 2013. Ray is currently studying to become a pediatric neurosurgeon as a fourth-year medical student.

“It is a huge honor to have been appointed student regent,” Ray said. “I am excited to work alongside the Board of Regents and look forward to serving as an advocate for my fellow students throughout the Texas Tech University System.”

Ray is married to Morgan Ray, a science teacher at Heritage Middle School in the Frenship Independent School District. Morgan will receive her Master of Education from Texas Tech in May 2014. Coby and Morgan recently welcomed their first child, Cora Elizabeth, in March 2014. They reside in Lubbock, Texas.