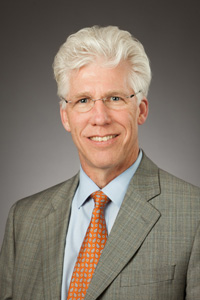 Lange is currently vice chairman of medicine and director of educational programs at the University of Texas Health Sciences Center at San Antonio and holds faculty appointment at Johns Hopkins.

Texas Tech University System Chancellor Kent Hance announced today that Dr. Richard Lange has been selected as the sole finalist for the position of founding president and new dean at TTUHSC El Paso.

Texas law requires officials to name a finalist at least 21 days before hiring the candidate. He will begin his duties July 1, 2014.

“We are delighted to have found such a great candidate for our first president and new dean,” Hance said. “I am confident that Dr. Lange is the man for the job as president of TTUHSC El Paso and new dean of the Paul L. Foster School of Medicine.”

Lange, 58, currently serves as vice chairman of medicine and director of educational programs at the University of Texas Health Sciences Center (UTHSC) at San Antonio. A tenured professor at UTHSC at San Antonio, he was formerly tenured and continues to hold a faculty appointment at Johns Hopkins Medicine in Baltimore.

“The quality of candidates that were reviewed through our search process was incredibly impressive,” said Board of Regents Chairman Mickey Long. “The committee members worked tirelessly to ensure that we identified the most qualified leader to take the reins in El Paso, and I am certain Dr. Lange is the perfect fit for the job.”

After completing his internship and residency training at Johns Hopkins Hospital, he returned to UT Southwestern for fellowship training in cardiology. He subsequently joined their faculty, where he became director of the Cardiac Catheterization Laboratory.

At UT Southwestern, he served for many years as the Fellowship Program director, held the Jonsson-Rogers Chair in Cardiology and was director of the Bernard and Audrey Rapoport Center for Cardiovascular Research.

In January 2004, he relocated to Maryland to serve as chief of clinical cardiology and the E. Andrus Cowles Professor at Johns Hopkins Hospital. At both Johns Hopkins and UTHSC at San Antonio, where he joined the faculty in 2008, Lange received numerous teaching awards from students, residents and fellows.

“To have someone with the qualifications and experience of Dr. Lange as our sole finalist for the founding president and new dean in El Paso, is a tremendous feather in the cap of the TTU System,” Hance said.

He has been president of the Texas American Heart Association Affiliate and an active and productive clinical investigator publishing more than 300 journal articles and book chapters dealing with ischemic heart disease, valvular heart disease and congenital heart disease in adults.

In his current role at UTHSC at San Antonio, Lange has oversight of 12 medicine subspecialty divisions, including clinical, research and educational efforts. The department is comprised of 250 faculty members with an annual budget of $50 million.

At Johns Hopkins, Lange led the drive to increase research funding by 60 percent to $39.5 million and establish new satellite clinical programs, and spearheaded the effort to raise funds for a new hospital.

“This is an exciting day not only for the TTU System, but for the El Paso community,” said Regent Rick Francis. “We are excited to see what the future holds for TTUHSC El Paso, and I am confident that Dr. Lange will pave the way for the continued success of our institution and its students.”

Lange said he is excited about the opportunity to lead the fourth and newest university in the TTU System.

“I look forward to working with the faculty, staff and students at TTUSHC at El Paso,” he said. “I have heard great things about the people in El Paso and the impressive momentum of the university. I look forward to a great future for this institution and am honored to have been selected as the sole finalist.”

Lange is married to Joy Bobette. They have three children and two grandchildren.