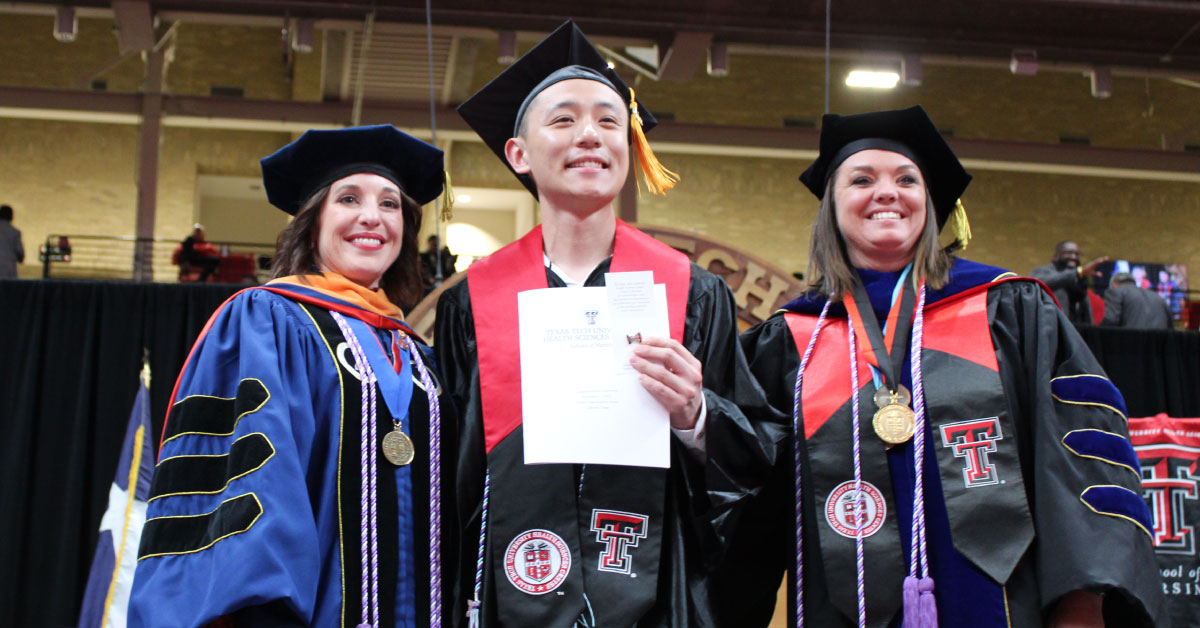 A nursing student from TTUHSC's satellite campus in Mansfield receives his degree at the School of Nursing commencement ceremony on Saturday, Dec. 17, 2022.

There were 465 candidates for graduation at the Texas Tech University Health Sciences Center (TTUHSC) School of Nursing commencement exercises Saturday, Dec. 17 at the United Supermarkets Arena.

Among those graduates was the first cohort of the School of Nursing satellite campus in Mansfield, Texas. The satellite campus, which welcomed its first group of student nurses in 2021, is a result of a collaboration with Methodist Healthcare System, Methodist Mansfield Medical Center and the city of Mansfield to address the shortage of nurses in the region.

According to a report from the U.S. Department of Health and Human Services, Texas will be short almost 16,000 nurses by 2030.

Of the 19 graduates, 13 are staying in the Dallas-Fort Worth metroplex.

“We believe that our implicit mission has to be to create what we can in terms of creating more nurses to ease the ever-present shortage of nurses all over Texas,” School of Nursing Dean Michael L. Evans, Ph.D., RN, FAAN, said. “What this means for the community is that they’re going to have better health care and better access to health care. Nurses aren’t just in hospitals. They’re in primary care clinics and schools. Anything having to do with health care in the community, whether it’s in Mansfield or greater Dallas-Fort Worth, it’s going to be improved by having an increased number of nurses per year in the region.”

The Mansfield satellite campus is an extension of the same program the School of Nursing currently has on its campuses in Abilene, Permian Basin, Lubbock and Amarillo.

“Many new nurses are attracted to the large, DFW hospitals,” said Amanda Veesart, Ph.D., R.N., Traditional BSN Program director. “Having a nursing school in the city of Mansfield, that is attending classes and clinical in the area, is a great recruiting tool. We are placing the students in the community early which directly correlates to learning the culture and system of the area. Many of the hospitals are looking to TTUHSC to graduate BSN-prepared nurses who will stay and help with the nursing shortage in the suburban area.”

According to Evans, Red Raider nurses are very much in demand because they have the knowledge and skills necessary to be successful. When they graduate, 90+ percent already have a job secured.

“We do a very good job of selecting those on who can be successful in this program and then helping them be successful after,” Evans said. “The reason we’re here is to improve health care through collaboration and innovation. We’re doing it through collaborating with community resources and our own internal resources to be able to bring a very innovated nursing education program.”