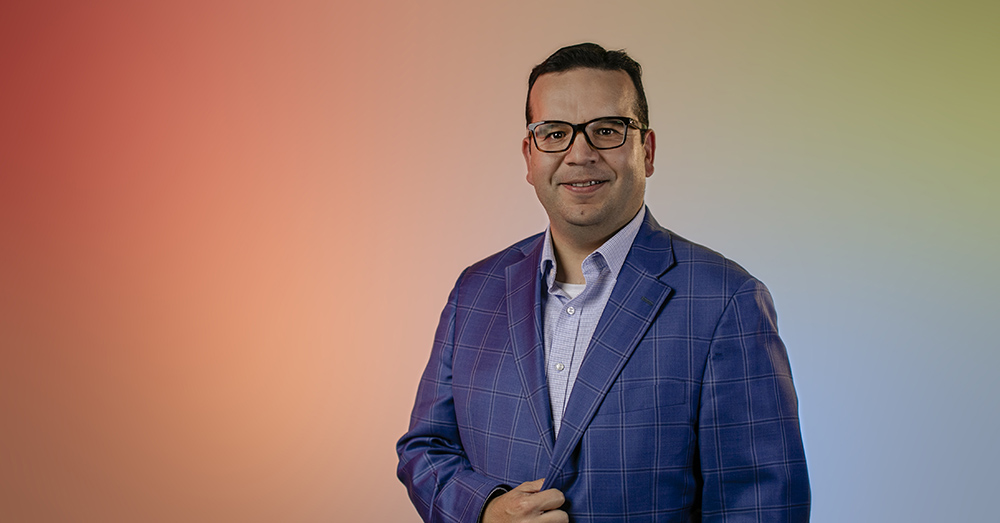 In February of 2022, Texas Tech University Health Sciences Center (TTUHSC) received an official designation as a Hispanic-Serving Institution (HSI). As only the third health sciences center in Texas to receive this status, such a designation enables the university to further strengthen its ongoing recruitment and support of underrepresented students and faculty, as well as improve its service as passionate health care providers to surrounding communities.

The university’s HSI status is something Garcia knows all about—it was one of the federal projects he worked on, and remains presidential priority. For Garcia, TTUHSC’s HSI designation means witnessing current and future students receive access and support that Garcia himself did not have when he was crafting his own professional identity.

Born and raised in the Rio Grande Valley, Garcia’s family roots were formed in Texas soil before Texas had even become a republic. A fifth generation South Texan, his family started as farmers in that region, and as their family grew, the country as we now know it took shape around them.

“My grandfather always said that we never crossed the border, the border crossed us,” said Garcia. “It’s very true, and a lot of South Texans in that area have similar backgrounds and really understand that.”

Raised in the economically disadvantaged community of San Benito, Texas, Garcia’s parents got married at about 19 years old, and divorced when Garcia was only two.

“I was raised by my mom’s side of the family primarily–my grandparents on my mom’s side and my mom. We all lived together,” said Garcia. “Even though my parents divorced very early, my paternal grandparents were also in San Benito and they had a big influence on my growing up as well. Through everything, my family tried to make it right by all coming together to be a part of raising me.”

Garcia’s past is filled with firsts. He was the first in his family to go to college, the first military officer and the first to earn a graduate degree. Excelling in academics from a young age, Garcia had a particular interest in politics.

Garcia did not have access to the connections  or resources that most young people have in the political field. But what his family lacked in wealth and prominence, they made up for with an overabundance of support.

That region of South Texas at the time did not have access to the internet, so Garcia had no real way to research colleges or map out a career plan.

“I never had a fellow college graduate or professional in the family to say, ‘this is how it’s done.’ I never had that roadmap,” said Garcia. “Programs like the HSI programs offered to students from disadvantaged areas really didn't exist at the time, so I had to figure it out on my own. And that can be very scary.”

Despite not knowing what the future would hold, Garcia’s ability to excel academically turned out to be the key to understanding his own passions.

The opportunities of education

Garcia studied economics at the University of Houston, but kept an eye on his interest in politics. By taking an internship for the Harris County Judge, he focused largely on the county budget.

With the tools he had gathered from economics classes, he found he had a gift and fascination for budgeting. During his senior year, Garcia worked part-time with state representative Kyle Janek, M.D. serving Houston’s Texas House District 134,  which includes the medical district.

“After I graduated, I was appointed by Dr. Janek as his legislative assistant in Austin,” said Garcia. Since Janek was on the appropriations committee, Garcia would get to work again in an area where he thrived–budgeting and earning a once-in-a-lifetime education on legislative appropriations.

So began Garcia’s 12-year career in Austin, which included his role as budget advisor for Governor Rick Perry and then-Speaker of the House Tom Craddick.

Without his family’s firm support and his personal drive to go to college, none of these many doors could have opened. This, for Garcia, is the reason that programs and opportunities provided by HSIs are so important.

“College ultimately provided me with the career path of where I wanted to go,” Garcia said.

As a reservist, Garcia took an active duty assignment as a legislative director to a two-star general for the Texas National Guard. This became a federal assignment, allowing him to work on budget proposals for the US Congress.

In that role, Garcia worked for Major General Charles Rodriguez, the first Hispanic Adjutant General of Texas, who saw the importance of Garcia’s work with budgets and appropriations.

“He was an assistant vice president at the University of Texas Health Sciences Center in San Antonio–and he basically told me everything would come full circle, and that all of this expertise with budgeting and career foundation I am building now is an essential part of higher education,” said Garcia. “So he's a big reason why I'm at TTUHSC now.”

The importance of family

Another first in Garcia’s family: coming from a military background, Garcia was the first to commission as an officer in the military.

“My maternal grandfather enlisted in the army during the Korean War, and my dad joined the Air Force after my parents had me, in order to make ends meet,” said Garcia. “But there were never any officers. So when I commissioned in the United States army, I was the first officer in my family. My grandfather was a former staff sergeant in the Army, and led the military tradition of pinning my lieutenant bars and giving me my first salute as an officer.”

During his active duty assignment, working primarily on military construction planning projects and Congressional budgetary proposals, Garcia was appointed as an operations officer overseas, leading a 37-soldier unit in Iraq.

“I was called up as an operations officer in Iraq, mainly with petroleum operations,” Garcia said. “Working as the leading director in that space was a tremendous experience.  This experience taught me first-hand about leading and building programs. Many of the tools I learned in Iraq I use in my capacity today.”

Garcia’s family roots are visible in every piece of his versatile career. Not only did his family impact his educational and military background, but they impact his sense of work ethic as well.

“My grandparents are a huge part of who I am,” said Garcia. “They all basically owned their own businesses, and worked multiple jobs, which instilled that work ethic in me, and that pride,” Garcia said. “They remind me to never forget where I came from. And to always help others along the way.”

Family is what led him to West Texas, as well. When planning to further his education, Garcia’s wife, Cara, a Texas Tech graduate, encouraged him to pursue his graduate degree at TTU.

“It was designed to be temporary,” Garcia admitted, saying the plan was to get his master's degree, transition out of the Army and head back to Austin.

“Cara and I really fell in love with Lubbock, and we love that her family is here,” said Garcia. “I earned my masters in public administration and we decided to make Lubbock home .”

“I’m teaching my son the values and traditions I learned from my own upbringing in South Texas,” said Garcia.

TTUHSC as a support system

Since childhood, Garcia’s family instilled his understanding that, with a background like his, he would have to work twice as hard to achieve his dreams. With this HSI designation, Garcia is hopeful that future generations will have access to resources that he did not–but that certainly doesn’t mean he disapproves of hard work.

For Garcia, the HSI designation is largely about community.

“My work ethic has served me well–it sharpens your professionalism when you have to work twice as hard,” said Garcia. “With these programs provided through TTUHSC as an HSI, I would want Hispanic students to keep working just as hard but know that they’re not alone in this journey.”

Giving back to the community

As Garcia sees it, the university becoming an HSI institution is a considerable opportunity to further TTUHSC’s vision to transform health care through innovation and collaboration–primarily through the new possibilities of academics and research.

“I hope that–since some of these research opportunities are specific to HSI–that the research can translate into something that affects some of these economically disadvantaged areas with high Hispanic populations,” said Garcia. “We have an opportunity to research how to bridge the gaps in access to health care–and how to address chronic diseases and the health disparities in those areas.”

When he envisions the future of TTUHSC as an HSI institution, giving back is a large part of what makes this designation special.

“When you grow up from a place like I did, it basically drives you to want to give back,” said Garcia. “By giving students these new opportunities, I hope that once they reach the professional level, we will have encouraged them to give back to the community–whether that means being a health care provider back in their hometown, or doing what I’m doing and being a torch-bearer, supporting the next generation of professionals.”