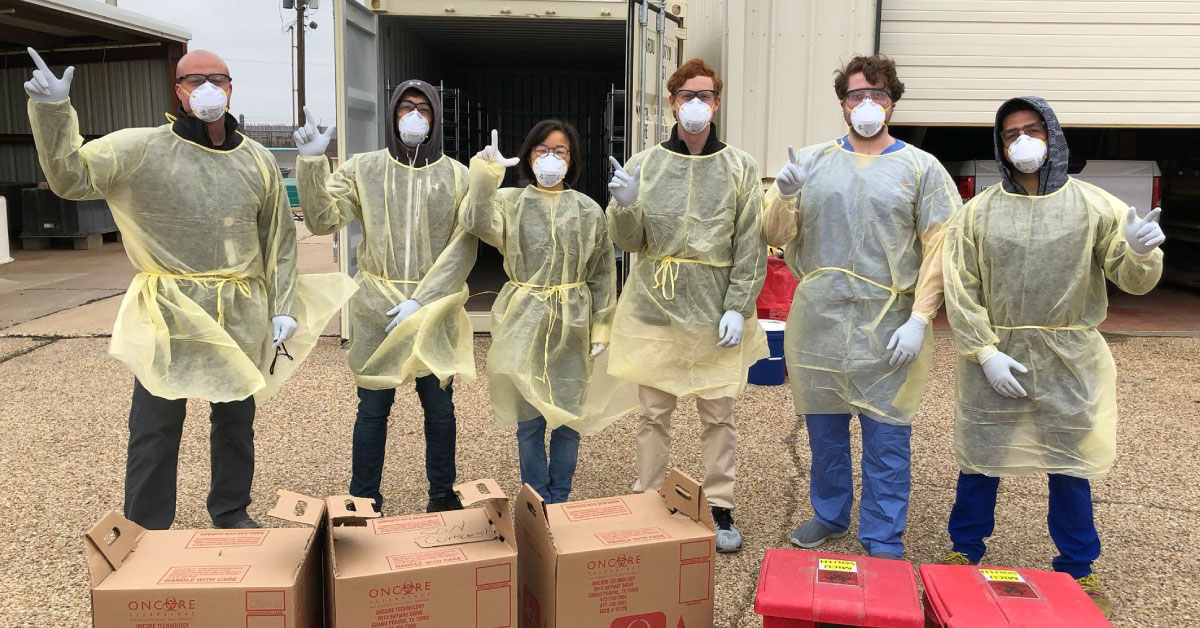 In its seemingly unstoppable march across the country, the COVID-19 pandemic has created a constant shortage of personal protective equipment (PPE) that is critical to protecting health care workers.

To address the issue, PPE makers have ramped up production, authorities have tapped into the nation’s emergency stockpiles and manufacturers from other industries have retooled to make more ventilators and masks. Still, the shortages are ongoing.

One suggested way to reduce the stress COVID-19 has placed on the PPE supply chain is to extend the lifetime of existing equipment. With that in mind, a team from the Texas Tech University Health Sciences Center (TTUHSC) has been studying a method that can decontaminate used PPE, especially N95 masks and face shields.

“The nationwide shortage of PPEs has forced our medical staff to use the same N95 mask over and over up to seven days,” Kang said. “Thus, we have been tasked to find the best method to decontaminate them.”

To accomplish their mission, Team Decon is currently testing a process that uses hydrogen peroxide vapor (HPV) to fumigate the PPE inside a large chamber until the decontamination cycle is complete before it is moved to drying racks. The HPV process, which also is being employed by a team from Duke University Medical Center, decontaminates the PPE without degrading it.

Kang said HPV by Batelle instrument recently has received Emergency Use Authorization by the Food and Drug Administration, and we are using the HPV method that Duke University published for PPE decontamination. She also is investigating the use of HPV contamination for the West Texas 3D COVID-19 Relief Consortium, a collaborative project between TTUHSC, Texas Tech University and other West Texas entities that has started producing masks, face shields and other PPE for rural hospitals that also face shortages. 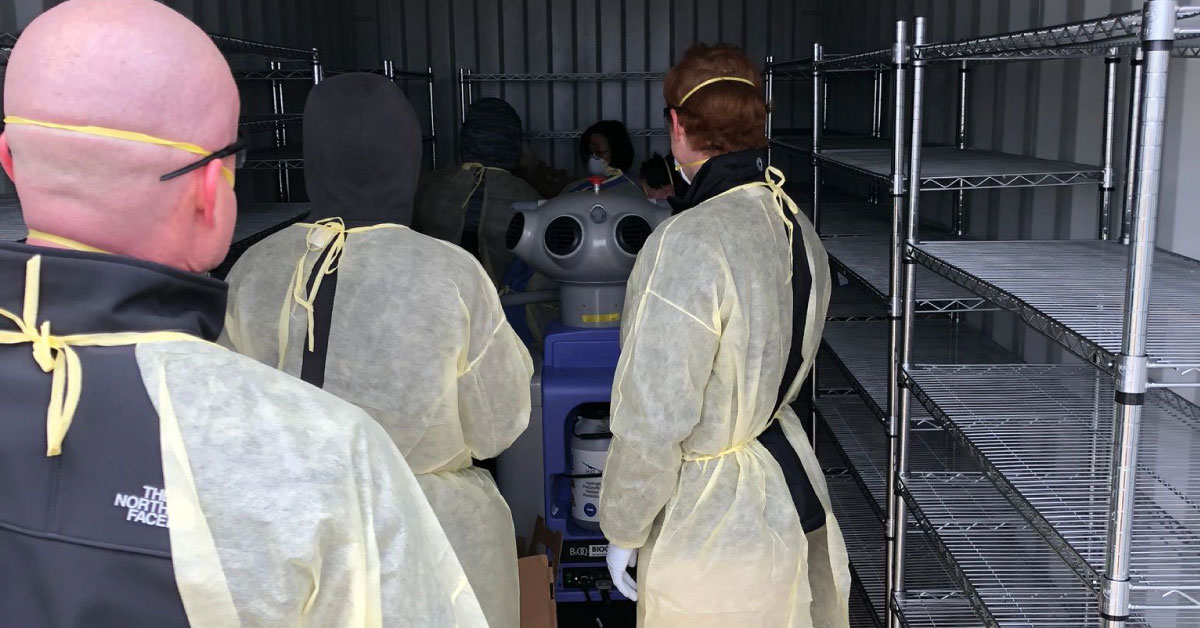 “One thing I’d like to point out is that this HPV method uses bioindicators that will tell us whether the decontamination was effective,” Kang added.

Kharbat, the student team leader, said the students collect the PPE from TTUHSC and UMC and triple wrap each piece in biohazard bags. The students then transport the sealed PPE to decontamination laboratories located at the Reese Technology Center where it placed inside a large machine that vaporizes hydrogen peroxide and cleans the items with the help of The Institute of Environmental and Human Health (TIEHH) personnel for the operation of the instrument. After the decontaminated PPE is properly dried, biomarkers are used to ensure all biological material has been removed and the PPE is ready for health care personnel to safely reuse.

“The idea is to maintain our supply of personal protective equipment for our physicians and nurses and other staff members that are combating COVID-19,” Kharbat said. “We're doing our part in maintaining their safety and hopefully this initiative will be able to aid in that process.”

When it comes to being away from campus life, Alkul said it has been like a summer break. However, he never imagined he would be participating on a project like Team Decon rather than moving forward with schoolwork.

Abla agreed, but said it also is a point in the students’ lives where they can take a break from their education but still move forward the calling they have to be doctors.

“As an aspiring doctor, it's like I can be on the front lines and make a difference during this pandemic rather than just be sitting at home and studying,” Abla said. “While it is kind of weird and off that we're not in classrooms with our classmates and peers studying in our typical way, it's also nice that we're able to apply ourselves and be on the frontlines and try to make a difference during this pandemic.”

Kile said there have been a few people who have questioned his decision to voluntarily place himself in a potentially risky situation.

“By aspiring to be a doctor, I feel like I signed up for being at risk in order to take care of other people, so this gives me an early opportunity to get experience in a situation like that,” Kile explained. 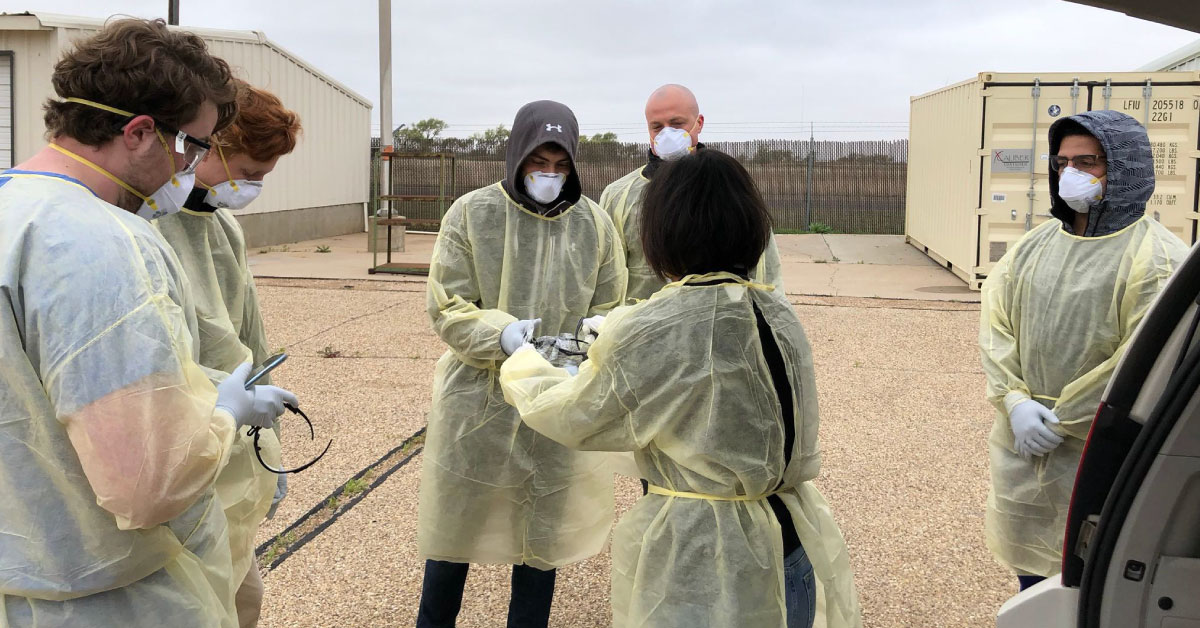 Kharbat also acknowledged the risk posed by working for Team Decon, but he said it's important for people to understand that TTUHSC is taking every precaution it can to ensure the students and all team members are fully protected. He said people can help make sure the team’s efforts aren’t wasted by coming together as a community and as a nation and following the shelter-in-place and quarantine guideline that have been established.

“What the average citizen or civilian can do at this time is stay home,” Kharbat stressed. “Try to donate resources if you have the capability to do so, but beyond that, stay home and stay safe. We're here to protect you, and the best way we can protect you is making sure that you don't get it.”