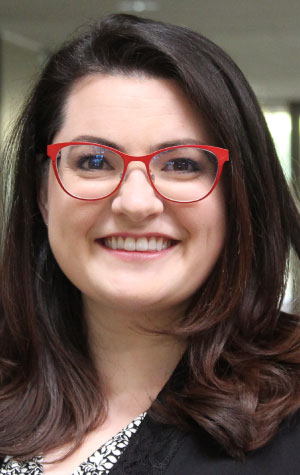 When Amy Stark, M.D., entered medical school in 2009, she did so with the intention of becoming a surgeon specializing in breast cancer. Those intentions remained generally unchanged until the end of her third year. Now, a decade later, she is the only addiction psychiatrist in Amarillo.

“I actually didn't think I'd be able to do psychiatry because I tend to be, as I say, kind of squishy on the inside, all soft and full of feelings,” Stark says. “I thought it would be too hard for me to treat people who had depressive disorders and things like that. Then, when I did the very last rotation in my third year, which happened to be psychiatry, I fell in love with it, and what I loved most was the relationships.”

The opportunity to develop relationships originally motivated Stark to pursue breast cancer as her preferred branch of surgery. She saw it as an opportunity to help women as they dealt with one of, if not the most pivotal moment in their lives.

“They're on this journey dealing with a health issue and you go on the journey with them,” Stark says. “When I learned that psychiatry is all about journeys and relationships too, I decided to switch gears.”

After graduating from the Texas Tech University Health Sciences Center (TTUHSC) School of Medicine in 2013, Stark completed a general psychiatry residency at the prestigious Mayo Clinic in Rochester, Minnesota where her leadership skills earned her an appointment to serve as chief resident for her class. She completed an addiction psychiatry fellowship at Yale University following residency and then came to TTUHSC in 2018 as an associate professor of psychiatry.

Though Stark is licensed in general psychiatry and addiction psychiatry, what sets her apart in Amarillo is an “X” certification she received from the U.S. Drug Enforcement Agency (DEA). The DEA assigns a unique number, or certification to most health care providers, including physicians, optometrists, dentists and veterinarians. The number allows providers to write prescriptions for controlled substances and it’s how the DEA keeps track of transactions and prescriptions involving controlled substances. The X license is a separate certification for prescribing only buprenorphine and requires additional training. The certification makes Stark the only psychiatrist in the Amarillo area who can prescribe the drug, most commonly known by the brand name Suboxone, which is an effective medication for treating addiction.

Buprenorphine is known as a partial agonist opioid medication because it activates certain brain receptors, opioid receptors in this case, to a lesser degree than does a full agonist. The drug also behaves likes an antagonist, giving it the ability to block other opioids while producing some of its own opioid effects that work to suppress symptoms and reduce cravings for the blocked opioids. Stark says she obtained her X license during her fellowship at Yale because of the large number of opioid patients that were being treated there.

“Buprenorphine is a mainstay of opioid use disorder treatment, and what we know from the evidence is that patients who are on maintenance treatment for opioid use disorder with either methadone or buprenorphine do so much better than those who are not on medications,” Stark explains. “If you detox someone and send them back out into the world without a maintenance medication, they have an 80% chance of relapse, so having someone on a maintenance medication is a really important part of their treatment plan. Outside of using a methadone clinic, buprenorphine is really your only option.”

Stark says there are other specialty physicians in town, including some at TTUHSC, who also have the DEA’s X certification. Buprenorphine comes in several formulations, including a patch that a lot of pain doctors use, and the VA hospital is able to prescribe it to their limited population, but she is the only physician in the area using the drug to treat opioid use disorder.

“Emergency medicine physicians can prescribe it without having done the extra training, but they can only prescribe a three-day supply to bridge you until you can hopefully get into treatment,” Stark adds. “As far as I know, I am the only psychiatrist in town who can prescribe it to the general population.”

Because the addiction medicine field is rapidly growing, Stark says there’s an increasing need for addiction specialists, not just in Amarillo and the Texas Panhandle, but across the country. Though some internal medicine physicians also specialize in addiction, addiction psychiatrists like Stark are in short supply. That shortage, combined with the number of patients she saw struggling with substance use disorders during her Yale fellowship, convinced Stark to learn more about treating those patients.

“Substance use disorders are ubiquitous, and it's not just opioid use disorder” Stark says. “Living in West Texas, we kind of have a ranch hand mentality where you work really hard during the day, maybe you have a few beers at night, and maybe you have more than a few. There's a lot of alcohol use out here, there's a lot of opioid use, and here in the central U.S. we also see a ton of methamphetamine use. So, I think it's important and necessary to have someone available to address addiction from a place of understanding and being non-judgmental who also can incorporate and assess for co-morbid psychiatric disorders and trauma.”

Stark says the opioid addiction crisis that has swept the country in recent years is much different than in the past. A decade ago, most people thought opioid addiction meant heroin and needles. The current opioid crisis certainly has those components, but it’s the prescription opioids that have spawned the latest epidemic. Stark says the situation has caused many physicians to clamp down on the number of painkillers they prescribe, a sharp contrast to the more laissez-faire prescribing approach that started in the mid-90s.

“What we're currently seeing is a lot of people who have more or less been cut off from high-dose prescribed opioids though they may have developed a dependence on them,” Stark says. “Now they are also needing treatment for an opioid use disorder they never thought they would have.”

Stark has several patients she treats for substance use disorders, including opioids, and it’s a part of her practice she truly enjoys. Before she arrived at TTUHSC, most of those types of patients had to travel to Oklahoma City or Dallas to receive buprenorphine or they were treated with methadone.

“Methadone is more strictly regulated, and you have to present to clinic every day to get your medication,” Stark says. “Because you may have limited clinic hours, it's a little bit more difficult for people on methadone to manage life, kids and family with having to get to the clinic at five o'clock every morning. Since I can prescribe buprenorphine, I think it definitely gives people here more options, and it's nice to have options.”

Providing that option and seeing her patients successfully complete treatment are among the reasons Stark is glad she became an addiction psychiatrist rather than a surgeon.

“Psychiatry is not an instant gratification field,” Stark says. “We play the long game a lot, so it's really rewarding when someone is finally feeling better and you can tell that they're able to more fully engage in the areas of their life that matter to them. Right now I'm fairly limited in the number of patients I can see just because this clinic is set up to run more like a general psychiatry clinic as opposed to a substance abuse clinic. But it's a great opportunity for people to get sober and get back on track with their lives, and I really enjoy that part of my job.”