Abilene’s Kelsey Finds the Force is With Her in Orlando 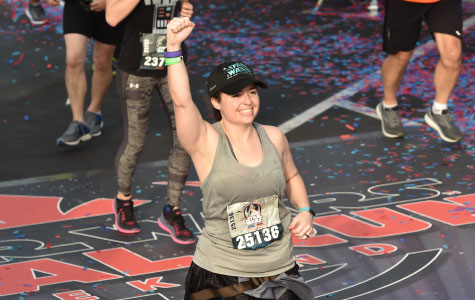 As Walt Disney famously said, “the way to get started is to quit talking and begin doing.” It’s a piece of advice that Michelle Kelsey, an IT support specialist on the TTUHSC campus in Abilene, has taken to heart — and to Disney World.

“I have been running for a couple of years,” Kelsey says. “I take mostly cardio group classes and began just running on the weekends by participating in local 5Ks and 10Ks. I’d say I typically run once or twice a week outside of classes.”

In April, Kelsey took her running to a new level when she participated in her first runDisney event in Orlando, Florida. All runDisney event weekends have a theme, and Kelsey said the courses wind through the different parks, depending on the race and the distance, and there are special events held for each event weekend. For instance, January features Marathon Weekend, February’ event theme is princesses and November’s theme is Wine and Dine.

Star Wars was the race theme for the April event weekend Kelsey chose. The event featured a Star Wars Rival Run where runners could choose the light side or the dark side.

“I became interested in the runDisney events when one of my gym class instructors mentioned he was doing one and he suggested I take a look,” Kelsey recalls. “I did some research and picked the Star Wars weekend because I love Star Wars.”

All runDisney finishers earn coveted one-of-a-kind medals uniquely designed for their race weekend theme. Kelsey ran and collected medals for all three races that were available – a 5K, a 10K and a half-marathon — and wound up putting in 22.4 miles in three days. She said each race began at 5:30 a.m. to lessen the effects of Florida’s heat and humidity, which she tried to prepare for but never really faced. Jeff Galloway, the official race trainer, advised Kelsey and her fellow participants to slow down and avoid overdoing it so they wouldn’t get injured or otherwise reduce their chances of finishing a race. 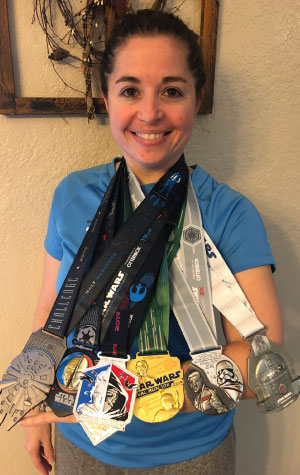 “I don’t know if I got lucky and it wasn’t very humid in Orlando this past April or if I just adjusted well,” Kelsey says. “The worst day was the half marathon – it was just really sticky and I took a lot of walk breaks and got water or PowerAde at every available station or I would not have made it the entire 13 miles.”

Kelsey also got pre-race advice from Justin Crowe, her gym class instructor, and his friend Jarryd Guerrero. Both work for Hendrick Health System in Abilene and were on the same flight to Orlando with Kelsey.

“I was able to ask them a lot of questions about runDisney since they had done this many times before” Kelsey added. “We also had dinner together and went shopping so I could continue to pick their brains about what to expect.”

During her five years with TTUHSC, Kelsey says she has become increasingly involved with running. Last year she entered seven races, including four 5Ks, a 10K, a four-mile race and a five-mile race. She is already searching for more local events so she’ll be ready for a return to Orlando.

“Locally we have mostly 5Ks, but I am already looking to go further,” Kelsey adds. “I have signed up for a half marathon in Fredericksburg in the fall to prepare for the runDisney races next April.”