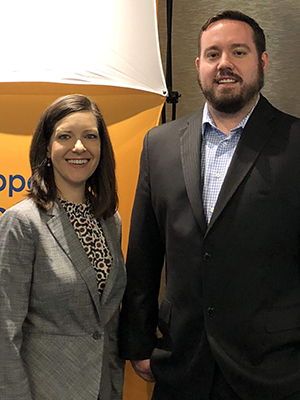 Molly Minze, Pharm.D., and Kalin Clifford, Pharm.D., from the TTUHSC School of Pharmacy Department of Pharmacy Practice were honored by their peers Oct. 20-23 at the American College of Clinical Pharmacy (ACCP) Global Conference in Seattle.

Minze, an associate professor on the Abilene campus, was named an ACCP Fellow, the highest honor the organization can award its members. In addition to being a full ACCP member for at least five years and a practicing clinical pharmacist for a minimum of 10 years, ACCP Fellows must have made a sustained contribution to the organization and demonstrated a consistently high level of excellence in clinical pharmacy practice, research or both.

After being nominated by an existing ACCP Fellow, Minze had to complete a comprehensive application that was objectively reviewed and measured by the ACCP Credentials Fellowship Committee. Practice and research criteria evaluated by the committee include examples of patient care services or educational programs developed by the nominee. The committee also considers the nominee’s certifications, credentials, professional activities and awards; drug therapy management responsibilities and consultancy; service to publications; and original research presentations, projects, funding and publications. After the committee’s evaluation, the ACCP Board of Regents must then approve the application.

Minze, who also is the incoming chair for ACCP’s Endocrine and Metabolism Practice and Research Network (PRN), said being named an ACCP Fellow is an honor that is second only to her promotion to associate professor.

“The fellowship recognizes being a pharmacy clinician at the highest level,” Minze said. “I set out to be a clinical pharmacist in my third year of pharmacy school, and to be recognized as a fellow — one who has consistently provided excellence in clinical practice over at least 10 years — is such an honor.”

Clifford, an assistant professor on the Dallas campus, was named chair for ACCP’s Geriatrics PRN, which is comprised of clinical pharmacists who are dedicated to the care of older persons and issues related related to aging. Its goals include providing geriatrics and aging programing to its members and to generating opportunities for PRN members to network so they share information and develop collaborative research.

“It is a great honor to be elected by my peers on a national level to serve in this role,” Clifford said.

As chair-elect, Clifford’s responsibilities will include developing geriatric programming for ACCP’s 2019 meeting, overseeing the geriatric committee’s work and nominations for committee positions, assisting the chair and coordinating other special projects as determined by PRN needs and objectives.