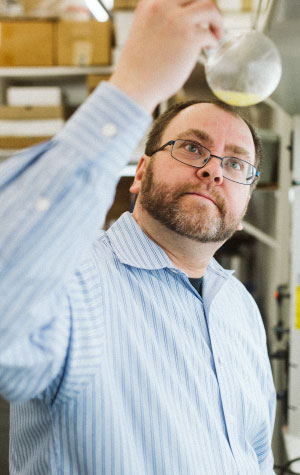 Paul Trippier, Ph.D., was interested in pediatric cancer treatment years before he became an assistant professor for the Department of Pharmaceutical Sciences at the TTUHSC School of Pharmacy in Amarillo.

“These young patients have the most to lose with this disease, yet there is little research being performed specifically to develop drugs for childhood cancers,” Trippier says.

And that is where the five-year, $1.88 million research grant Trippier received in December from the National Cancer Institute at the National Institutes of Health (NIH) comes into play. He says the R01 grant, titled, “AKR1C3 Inhibitors as Chemotherapeutic Potentiators,” will help his team advance their research to the next level.

“The chemistry of the compounds used to develop highly selective inhibitors is fascinating, and the effects we are seeing in cells harvested from cancer patients are pretty spectacular,” Trippier says. “With the funding from the NIH, we can continue preclinical development of these compounds.”

Trippier, who came to the School of Pharmacy in 2012 after several years at Northwestern University in Illinois, says the AKR1C3 enzyme is over-expressed in several types of cancers where it functions to increase tumor aggressiveness and boosts resistance to a number of clinically approved chemotherapeutics. To neutralize these conditions, Trippier’s laboratory has developed small molecules that are the most selective inhibitors of the AKR1C3 enzyme ever created. In preliminary research, his laboratory has already shown it can completely counter drug resistance to a prostate cancer therapeutic in resistant cell lines.

“We also show that we can counter drug resistance to several clinical drugs in childhood leukemias, and we will continue development of these compounds in the hope of developing possible drug candidates,” Trippier says. “If we’re successful, these compounds can be combined with existing chemotherapeutics to counter drug resistance and to potentiate the anticancer effects, allowing lower chemotherapeutic dosing and fewer adverse side effects.”

In addition to side effects, Trippier says the possibility of patients developing resistance to their drug treatment regimen is another major obstacle in the fight against pediatric leukemias. The goal of his newly funded research project is to develop novel drug compounds that can counter the side effects and drug resistance issues and provide a better quality of life for pediatric leukemia patients taking chemotherapeutics. 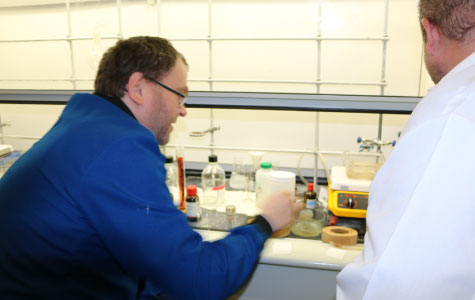 “Our compounds also have shown benefits in treating castration-resistant prostate cancer, a highly aggressive advanced cancer that is very difficult to treat due to rapid development of drug resistance,” Trippier says. “Again our compounds show promise to overcome this resistance, which in the future may open up additional treatments options for patients with this high mortality cancer.”

“Kshitij Verma, my very first graduate student who has now graduated and is working in the pharmaceutical industry, provided much of the preliminary data this new NIH grant was based on,” Tripper says. “The work is continuing with Ahmed Morsy, one of my current graduate students.”

Trippier also is quick to acknowledge previous support he received from a grant funded by Leukemia Texas, a local foundation and patient advocacy group based in Dallas.

“This NIH grant is an example of how local foundations can help advance research and catalyze larger federal research support, all focusing on improving treatment for patients” he says.