TTUHSC-Amarillo won 2nd place in the Corporate Brisket category at the Chamber Barbecue. 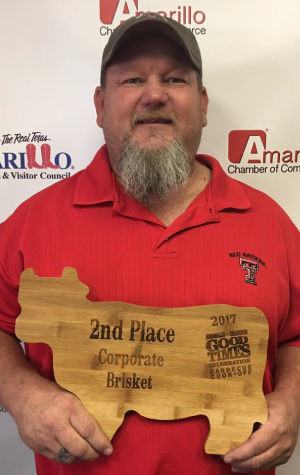 Michael Corona from Facilities, Operations and Maintenance captained the team this year and accepted the 2nd place prize for the team’s entry in the Corporate Brisket category.

“I’ve cooked a lot of barbecue over the years,” Corona explained. “To be one of the best out of so many teams really helps put TTUHSC on the map with Amarillo.”

The event featured more than 100 cooking teams serving ribs, brisket, sausage and more. Money from event ticket sales and sponsorships go toward helping the chamber cover its operating costs throughout the year.

In addition to the standard barbecue fare, the TTUHSC team served a unique grilled item: Peanut butter poppers. The bacon-wrapped treats are similar to traditional jalapeño poppers, except they’re filled with peanut butter instead of cream cheese.

“The peanut butter poppers were so popular among attendees that the team couldn’t prepare them fast enough,” Amarillo Communications and Marketing Director and team member Justin Patterson added. 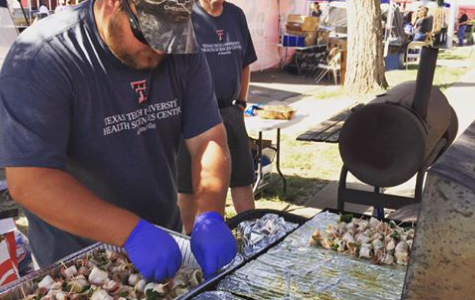 The Good Times Celebration Barbecue Cook-Off is the largest event the Amarillo chamber hosts each year and provides an opportunity for local businesses to network with each other and the Amarillo community.

“This is a great opportunity for us to showcase the Health Sciences Center to a large number of people and to tell them the depth of what we do,” Patterson said. “We are a big part of the Amarillo community, and the people in attendance saw that with our team this year.”

Members of the main cooking team included Corona and his son Hunter, who also works in Facilities; Patterson and Mark Hendricks from the Office of Communications & Marketing; and Tim Taylor from Safety Services.

“Many more volunteers from across the TTUHSC Amarillo campus came out to support the team and help serve food during the two-day event,” Patterson said. “We really appreciate all of their hard work.”