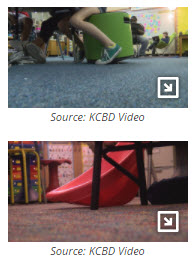 According to the Centers for Disease Control, the diagnosis of Attention Deficit and Hyperactivity Disorder has risen across the United States in recent years.

However, an article in the Washington Post questions whether there really are more kids with ADHD, or if kids just aren't getting out as much energy as they were 20 years ago.

"I don't know for sure that we have more children that have these problems, I think we're more willing and more able to identify the problem," says Amanda Masters - M.D., who is in pediatrics with Texas Tech Health Sciences Center.

"There certainly are concerns where we can over-diagnose and over-treat things that would be normal behaviors in kids, and the Academy of Pediatrics has actually put out guidelines trying to prevent this," says Masters.

She says there's a specific reason for that caution.

She says those characteristics are especially common in younger children - which is why she says teachers are so crucial in a child's life.

"Let kids be kids and still try to get them to learn," Masters says.

Masters' mentality is something teachers across the Hub City are embracing.

At South Elementary within Lubbock-Cooper ISD, 1st grade teachers, Erin Pollard and Sarah Price, decided to bring in alternative seating in their classrooms this year.

"For 1st grade, we have a lot of movers, our kids like to move, they like to fidget. So, for those kids, they couldn't think about what they were supposed to be learning. This gives them this outlet. They can bounce on the bouncy balls, on the floor they can rock on the rocking chairs. The ones that like to stand and kneel and stand, they can do that and they can still feel comfortable and they don't feel like they're going to get in trouble if they do those thing," Erin Pollard says.

Meanwhile, across town, at Hardwick Elementary within Lubbock ISD, teachers are relying on technology to help their students connect.

"There's one that works on vocabulary, letters, numbers, shapes, everything that you can imagine, and right now, none of them are coming up to me, they don't have any questions for me, it's a great way to keep them involved," Kidwell says.

But, the use of technology doesn't stop as kids move up a grade.

"I think it's about meeting the students where they are. We live in a world where they're on video games, they're on their cell phones, they're watching TV, their world is technological, and so why are we still having classrooms that look like the 1950's without the technology in it," Sobehrad says.

However, that technology goes beyond engaging for 5th grader Ryleigh Duke.

"It makes me feel less pressured, kind of, like less tense, cause now that I know if it's the right or wrong answer, than just having a 50-50 percent chance that it's right or wrong," Duke says.

Dr. Masters says while alternative seating, and even technology can help keep a child focused within the classroom, if your child is diagnosed with ADHD, there is something important to remember.

"What I tell parents all the time, is this has nothing to do with your intelligence, it has to do with how you need to learn," Masters says.

She says with today's knowledge and the treatment and technology available, the stigma surrounding the diagnosis is continually improving.

"I think now, people see it as something where we can get some help. And so, instead of 'no I don't want my child labeled, it's let's do everything we can do to make my child successful."