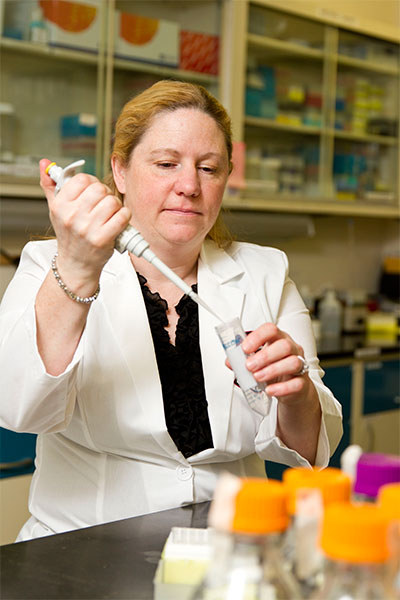 • At least 68 percent of people age 65 or older with diabetes die from some form of heart disease; and 16 percent die of stroke.

• Adults with diabetes are two to four times more likely to die from heart disease than adults without diabetes.

“Rather than using insulin to treat blood glucose and diabetes, we are using a different molecule to treat cardiovascular disease,” Dufour said.
Dufour’s lab previously researched Sertoli cells. Sertoli cells are found in the testes and protect the germ cells from an immune response. Sperm cells are not present at birth. When the immune system is developing they are not there. They later appear at puberty.

“With these new cells, the immune system doesn’t know what they are,” Dufour said. “Sertoli cells, besides providing appropriate things for nurturing and development of germ cells, they modify the immune response and protect them. We have been taking advantage of that in cell transplantation.”

Dufour’s lab has been co-transplanting Sertoli cells with pancreatic islets to treat diabetes.

Now with the Nash grant, the other area of focus is engineering Sertoli cells to make therapeutic proteins.

“The idea is since they can protect islets and germ cells, and they survive, rather then try to protect another cell, why not get the sertoli cell to make what you want and then use it to deliver it,” Dufour said. “The advantage is when the islets are not protected, the Sertoli cells will survive without the use of continuous immune suppressive drugs. If the Sertoli cells are surviving, why not just use them.”

Dufour’s delivering insulin research, “Genetically Engineered Sertoli Cells as a Vehicle for Cell-Based Gene Therapy,” was funded through the Wilson Foundation. Now the lab uses Sertoli cells that are making insulin and using diabetes models to treat diabetes. She also is funded by the National Institutes of Health on the immune part of regulatory T-cells, “Regulatory T-Cells to Improve Sertoli Cell Protection of Transplantation of Islets.”

The next step through the Nash grant relates to treating diabetes complications.
Dufour said receiving the grant was exciting since the foundation had not funded TTUHSC in 10 years and is highly competitive.