Have you ever seen a baby with a helmet and wondered why the helmet? Have you or a friend had a child with some asymmetry or flattening of the head and wondered whether there was any cause for alarm or anything that needed to be done? Joshua Demke, M.D., a facial plastic and reconstructive surgeon from Texas Tech Physicians, said treatment is possible and depends on the severity of flattening and baby’s age at the time of evaluation.

“Positional plagiocephaly or deformational plagiocephaly is the term doctors use to describe flattening of the head as result of external force, usually the result of laying on the back of the head in the first months after delivery when a baby’s head is very moldable,” Demke said. “It is very common with 30 to 50 percent of all babies experiencing it in some fashion. Typically, one side is more flattened, though in some kids both sides of the back of the head can be affected, leading to a head that is shorter from front to back and wider from ear to ear.” 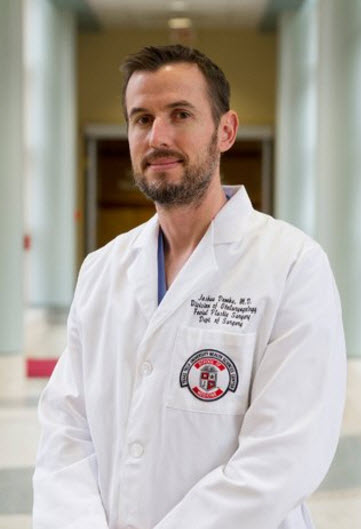 Neither of these forms of positional flattening affects a baby’s brain development or causes neurodevelopmental delays. In some instances, one of the neck muscles is congenitally stiff and leads to torticollis, in which the head tilts towards one shoulder and frequently causes the baby to favor sleeping on the opposite backside of the head. When torticollis is present neck physiotherapy or stretching exercises are usually needed to improve neck and head posture and in rare cases, Botox can be injected to relax the muscles of the neck on the affected side for three months, which can make physical therapy easier to perform.

“You can minimize the chance of this developing by keeping your baby upright or off the back of the head, and by rotating on which side of the back of the head they sleep,” Demke said. “In the first four to five months of life before a baby learns to roll over, the head is most likely to become flattened if you aren’t careful, but it will most likely improve with “repositioning maneuvers.”

After about six months of age repositioning maneuvers are less effective. If severe flattening persists beyond six months of age, then your physician may refer you to an orthotist for an orthotic molding helmet or band, which is adjusted once or twice a month over the course of therapy to affect change in a baby’s head shape.

“Helmets are most effective when worn 23 plus hours a day for three to six months and are less effective when used after a year of age,” Demke said. “The likelihood of persistent asymmetry or flattening despite helmet use depends on when the helmet was started, how compliant you are with using the helmet, and how many months of use.”

If you have questions or concerns about your baby’s head shape, visit with your baby’s physician. The key to treating any type of head deformity is early diagnosis and intervention.