K is for Energy 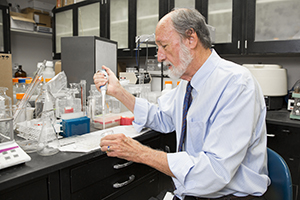 Aged cheese and cows grazing on green grass have a connection that researchers have found may give humans more energy.

When cattle eat green grass they obtain vitamin K1, which bacteria in their rumen modifies to vitamin K2.  Additional K2 is obtained in the process of cheese production, specifically aged cheese. Humans also get some vitamin K2 from bacteria in their intestine.

However, Ted Reid, Ph.D., professor in the Texas Tech University Health Sciences Center (TTUHSC) Departments of Ophthalmology and Visual Science, Chemistry and Biochemistry and Immunology and Molecular Microbiology, said today, cattle don’t feed on grass as much, therefore, humans are not getting sufficient vitamin K2 for health benefits.

“Researchers have known for years that vitamin K1 and K2 are important to a person’s health,” Reid said.

Vitamin K1 is important because it works in a cycle to donate protons and plays a role in blood clotting and the regulation of calcium and metabolism. Vitamin K1 is absorbed in the small intestine and is localized in the liver.

“However, when Americans became concerned with the negative health risks of eating dairy products and certain foods, many began to cut out cheese and milk, cutting out much of the vitamin K2 needed for good health,” Reid said.

Although eating dairy and other calcium supplements was found to develop calcium plaque in arteries causing heart attacks, women need more of it because of osteoporosis. This is the paradox for women. They need more calcium but it can lead to heart attacks.

“The problem is lack of vitamin K2,” Reid said. “Vitamin K2 is required for the removal of calcium from arteries and veins and its transport to the bones where you need it, which is important for women and men. This is the answer to the paradox.”

Back in the 1950s and 1960s, researchers looked for answers as to how vitamin K2 might interact with mitochondria, which are organelles that supply energy to the body.

Reid explained that mitochondria were from ancient bacteria taken up by cells eons ago. Remnants of these bacteria now function to produce energy in your body. One of the molecules they produce is Adenosine 5'-triphosphate (ATP), which is the principal molecule for storing and transferring energy in cells. Without mitochondria, you could not lift a finger.

In another collaborative study with the University of North Texas, findings confirmed, when vitamin K2 is added to a human diet, energy capacity can actually go up.

The study at North Texas looked at 19 young volunteers and gave them vitamin K2 supplements for 6 weeks. When the volunteers were then tested, their cardiac output improvement was equivalent to 6 months of extensive physical training.

In this study, participants were given vitamin K2 supplements. But Reid said other sources for vitamin K2 include aged cheeses, organ meats like chicken liver, salami and egg yolks.