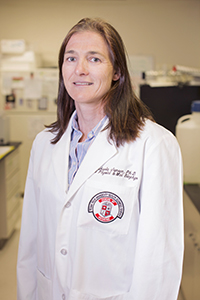 “The antidepressant bupropion is a negative allosteric modulator of serotonin type 3A receptors,” was published in the September issue of the journal Neuropharmacology.

These receptors, which are members of the pentameric ligand-gated ion channel (pLGIC) family abundant within and outside the human brain, are implicated in the causation and development of psychiatric disorders such as anxiety and depression as well as schizophrenia, irritable bowel syndrome, addiction and substance abuse and cognitive dysfunction.

More than 30 years ago, researchers discovered that molecular targets for bupropion were certain reuptaketransporters within the brain neuronal networks. Drugs modulating the function of these transporters were considered good for the treatment of depression. Years later in 1999, researchers found bupropion also inhibited nicotinic receptors and thus could help with smoking cessation.

In this recent study, the research team lead by Michaela Jansen, Pharm.D., Ph.D., at the TTUHSC Department of Cell Physiology and Molecular Biophysics, examined the ability of bupropion and its primary metabolite hydroxybupropion to block the function of serotonin type 3A receptors (5-HT3ARs). 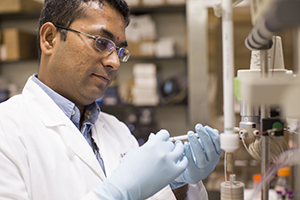 “For a long time, the blockade of dopamine and norepinephrine reuptake by the antidepressant bupropion within the hypofunctioning central nervous system monoamine systems has remained one of the pharmacological underpinnings for its therapeutic efficacy,” Akash Pandhare, M.D., Ph.D., first author of the study and researcher at the TTUHSC Department of Cell Physiology and Molecular Biophysics, said. “This study for the first time established the 5-HT3ARs as a hitherto unidentified molecular target of bupropion.”

“The research will provide the basis for the development of improved pharmacological interventions for both addiction and depression,” Jansen said.

Jansen’s team’s research demonstrates blockade by bupropion as well as its major metabolite at 5-HT3ARs clinically-relevant concentrations. The research findings of Jansen’s team now will be a part of medical and pharmacy textbooks. The research team included Pandhare, Jansen, Aneesh Satya Pappu, Ph.D., Henrik Wilms, M.D., Ph.D., Michael Paul Blanton, Ph.D. The research was supported in part by a seed grant from the South Plains Foundation and a grant from the National Institute of Neurological Disorders and Stroke of the National Institutes of Health.

“Now when a psychiatrist prescribes this drug, they also will have a better understanding of how it works as an antidepressant,” Pandhare said.