For the Love of Science 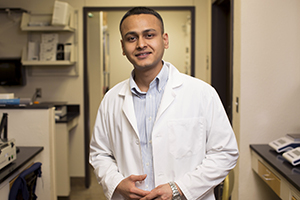 As a young boy, Somnath Pandey loved seeing small things under a magnifying glass. His inquisitiveness at an early age would lead him to love science and on a path to becoming a researcher. Born to Indian parents, Pandey grew up in England.  His father, now a retired flight lieutenant, J. P. N. Pandey, was commissioned in London, UK.

“Being from a military family, I owe so much to my parents,” Pandey said. “There is that push to work hard for what you want and a discipline you inherit.”

In 2002, Pandey and his family went back to India where he began working on a master’s degree after finishing his bachelor’s. He later returned to Leeds, England as a visiting scientist to pursue research in dyslipidemia andmyocardial infarctions. Pandey would reach out to other scientists. One researcher, Steve Alexander, Ph.D., liked the work Pandey had completed in University of Leeds and invited him to come to the U.S. as a Ph.D. student at Louisiana State University. It was there that he met Kevin Pruitt, Ph.D. Pandey later became a part of Pruitt’s research team now at Texas Tech University Health Sciences Center (TTUHSC).

“I discovered I had a desire to investigate more about cancer,” Pandey said.  “It was like falling in love all over again with science, except this time I was looking at human cancer cells under the microscope instead of curiously gazing at small bugs and beetles with a magnifying glass. I really was struck by how a protein behaves. The way I see it, proteins have their own peculiar behavior like we do and ‘context’ is key. When I am calm and composed, I would respond to a problem much differently than when I am anxious or angry. Similarly, if you can prevent aberrant protein behavior, you can prevent cancer.”

Pandey and the team demonstrated how regulating protein-protein interaction could lead to a possible strategy towards treating colon cancer. “Proteins such as sirtuin1 (SIRT1), histone deacetylase 1 (HDAC1), alpha-thalassemia and mental retardation syndrome X-linked protein (ATRX), heterochromatin protein 1 (HP1) and methyl-CpG-binding domain protein 2 (MECP2), involved in repression of genes are also implicated in cancer. There are moments when these proteins interact with each other to regulate tumor suppressor genes. Selective targeting (for example of SIRT1 with pharmaceuticals) and preventing these proteins from interacting can help decrease cancer growth.” Pandey et al. discovered a novel site in MECP2 that regulates its interactions with ATRX and HDAC1. 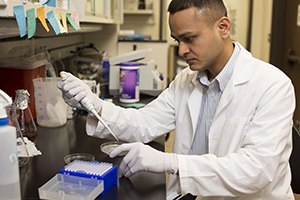 The implications for his research are personal for Pandey. With his entire family back in India, he has been a part of an American family here in Lubbock. Pandey speaks of his American sister Shauna Thomas Nunez who was diagnosed with breast cancer in 2010.

“The disease took a big toll on Shauna and our family,” Pandey said. “After battling very hard, she passed away this past year in October. My sister’s illness is a motivating factor and keeps me in line. Thanks to my supervisor, I ask myself, “Why am I doing what I am doing? What is the one thing I want to accomplish?” Research is a passion for me, like all graduate students. My hope is that this research may potentially have answers for not only colon cancer but for breast cancer too.”

The theme for this year’s Student Research Week was “Molecular Basis of Life + Disease.”

“The essence of our theme was featured with our keynote speakers and student speakers whose research explores the scientific basis of how life works at a molecular level and how this understanding can help treat disease,” said Bala Meenakshi-Purna, Graduate School of Biomedical Sciences student and event chair.

“This year, we had a tremendous turn out from all TTUHSC schools,” Schneider said.  “Student Research Week provides our colleagues at TTUHSC and the community a glimpse into the quality of TTUHSC student researchers.”

School of Medicine Residents and Fellows