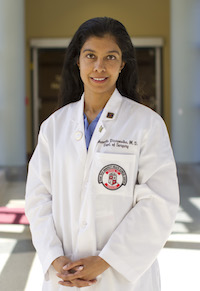 Sharmila Dissanaike, M.D., has been named the chair of the School of Medicine’s Department of Surgery. Dissanaike she transferred to the TTUHSC School of Medicine in 2002 to complete her residency and then returned as faculty in 2007. She is now a professor of surgery and the medical director of the John A. Griswold Level 1 Trauma Center at University Medical Center.

Dissanaike has won numerous awards for clinical performance and academic achievement, as well as teaching awards from surgery residents and medical students. She is faculty at the McGovern Center for Ethics, Spirituality and the Humanities and serves on the Ethics Committee of the American College of Surgeons and Chair of the Ethics Committee for the American Burn Association, where she also serves on the Verification Committee that accredits burn centers. She has a strong interest in promoting clinical research and serves as the School of Medicine representative to the TTUHSC Clinical Research Institute, faculty in the Center for Translational Neuroscience as well as the director of the Burn Center for Research Excellence.

Wade Redman, Ph.D., MBA, M.T., has been appointed chair of the TTUHSC School of Health Professions Department of Laboratory Sciences and Primary Care. Redman joined TTUHSC in 2005 as an assistant professor and has since served as assistant program director and program director for the Clinical Laboratory Science traditional and second-degree programs.

Redman’s research interests are focused on academic integrity among health professions students and innovative classroom curriculum. He currently serves as a National Accrediting Agency for Clinical Laboratory Sciences reviewer for accreditation and has previously served as a site inspector for the College of American Pathology.

Dawndra Sechrist, OTR, Ph.D., has been appointed to the position of Assistant Dean for Learning Outcomes and Assessments for the School of Health Professions. Sechrist joined TTUHSC in 2001 as the academic fieldwork coordinator for occupational therapy and has served as the Occupational Therapy program director since 2003.

Sharmila Dissanaike, M.D., was named president of the North Texas Chapter of the American College of Surgeons (NTACS). She is active in clinical surgery, with a focus on critical care, trauma and burns.  The NTACS provides a vehicle from which fellows, associate fellows, residents and medical students may interact with the college to carry out the mission of improving the care of the surgical patient. The NTACS chapter reaches out across surgical specialties for improved communication between disciplines, promotes cooperation with civic groups, third party payers and state government agencies.

Carrie Edwards, Ph.D., R.N., has been selected to join an elite network of more than 6,000 women as a member of the Leadership Women, Inc. (LW) Class of 2016. Edwards is an expert in critical care nursing, forensic nursing and a sexual assault nurse examiner for Lubbock County. Edwards joined the TTUHSC School of Nursing faculty in 1996. Since then, Edwards has been named TTUHSC Student Senate Teacher of the Year in 2000, a member of Sigma Theta Tau International and a member of the International Association of Forensic Nurses.

Lisa Campbell, DNP, R.N., has been appointed to serve on the American Association of Colleges of Nursing (AACN) expert panel. Campbell and the AACN will lead initiatives focused on improving the public health workforce in the U.S. In addition to enhancing nursing faculty development in public health, she will facilitate in innovating nursing curriculum and encouraging student engagement towards careers in public health nursing. 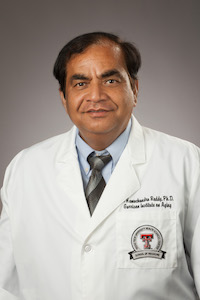 P. Hemachandra Reddy, Ph.D., executive director and chief scientific officer of the TTUHSC Garrison Institute on Aging and School of Medicine professor in the Departments of Cell Biology & Biochemistry, Neuroscience/Pharmacology and Neurology, received the Bharat Gaurav Award from the All India Human Welfare Council. The council stated that considered Reddy has given “a fight in life and your worthy example does inspire others towards certain remarkable achievement.”  Along with the Bharat Gaurav Award," Reddy was given a certificate of excellence. The award honors achievements in any their field by their efforts and hard work.

Paula Webb, DNP, R.N., has been appointed a Texas Organization of Nurse Executives (TONE) President-Elect to lead fellow nurse executives and leaders from around Texas in innovating nursing leadership in health care. Webb has been a TTUHSC School of Nursing adjunct faculty member since 2013, coming from an extensive background in executive nursing. Prior to this appointment, Webb also serves on the Board of Directors and as treasurer for TONE.