All Roads Lead Back to Lubbock 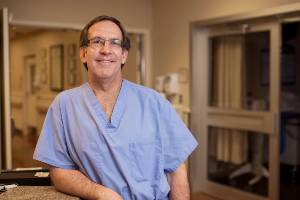 As the oldest of six brothers and sisters, John Griswold, M.D., grew up helping take care of his family. He knew early on that he enjoyed science and medicine and was told by his parents that he was going to be a pediatrician one day. After starting medical school at Creighton University in Omaha, Nebraska, it donned on Griswold that surgery was where his heart was.

“I realized there is such an ability to make a difference in surgery, mostly the ability to cure illness and injuries,” Griswold said. “There was an opportunity for me to impact peoples’ lives.”

The chair at Creighton University, Claude Organ, M.D., had a friend, Peter Canizaro, M.D., headed to Texas Tech University Health Sciences Center (TTUHSC) School of Medicine to take over the leadership of the Department of Surgery. Organ encouraged Griswold to apply for residency there. Griswold would complete his residency at the TTUHSC School of Medicine in 1986.

“There aren’t too many people left who remember, but the years Dr. Canizaro and Dr. Shires were here, they were the leaders of the hospital, influential in surgery and gifted surgeons who loved to teach,” Griswold said. “Between the two of them, I realized I wanted to be an academic surgeon. I walked into Dr. Canizaro’s office and said I wanted to do a fellowship in burns, and he said, It’s about time. He and Dr. Timothy Harnar helped me get fellowship. He was my strongest mentor. My association with him lead me to want to do academic surgery, burn and trauma care.”

But Griswold’s resident home would call him back to Lubbock. G. Tom Shires, M.D., recruited him back to run the burn center. Griswold ran the burn center and was a TTUHSC faculty member from 1992 to 1997. In 1997, he was named the ninth chairman of the Department of Surgery at TTUHSC.

“As the new surgery chair, I walked into a unique situation,” Griswold said. “The previous eight chairs, the average tenure was 2 and a half years and of those eight, two died suddenly and one had a massive heart attack and had to resign. The first 15 years, the department was really in a state of flux. I am thankful that the School of Medicine believed in me enough to do this for 19 years. The stability of plotting through it takes time to build and because of that, the department has strengthened grown and advanced. I am proud of that and thankful.”

Steven Berk, M.D., TTUHSC executive vice president, provost and School of Medicine dean, said the Department of Surgery is one of the most important and most challenging departments in the medical school.

“Under Dr. Griswold’s leadership, the department has strengthened,” Berk said. “He has been a role model to students, residents and colleagues. “Because our department deals with expertise in trauma surgery and burn patients, Dr. Griswold had a challenging opportunity to build the centers. And, he succeeded.”

Griswold credits Harnar and Cazinaro for their insight and vision for the burn and trauma centers.

“They knew that emergency surgery, trauma and burn care were needed in this area because of the vast size,” Griswold said. “We needed something that could potentially save lives. There were not centers at that time, but Harnar and Casinaro provided the platform for me. When I came back to Lubbock, the first line of business was to create the trauma unit.”

Griswold said the newly created trauma center was the first in Texas to receive dual certification by both the ACS Committee on Trauma and the State of Texas.

“The trauma center was difficult to develop,” Griswold said. “It took awhile to get high level marks. And most of all, it was because of a lot of effort by many people.” 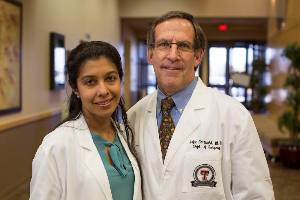 “You come to work everyday and try to do the best you can,” Griswold said. “You work with amazing people at a wonderful location. I guess it’s surreal. I think recognition for all of it was worth it. Taking care of patients, taking care of the team and respecting the team is what makes it a success. Surgery has evolved. It is no longer just about a physician treating a patient. Now, it is a team mixed into a complex system. Everybody has to be on the same page, motivated, believing in the cause and to go see the patient.”

Griswold served as the medical director of the trauma center from 2000 to 2014 and the medical director of the Timothy J. Harnar Regional Burn Center from 1992 to present. He served as chairman of the Department of Surgery from 1997 and in February stepped down. Sharmila Dissanaike, M.D., now serves as the chair of the department. After serving as chair for more than 19 years, Griswold has mentored more than 70 residents. Dissanaike also completed her residency at TTUHSC in 2002 and returned after a fellowship.

“People come back for a reason,” Griswold said. “This is a unique place. I hope everyone realizes what a special thing we have here. The atmosphere here is rare to find other places.”

Griswold’s main focus is serving as the director of the burn center and working on more burn research. His longtime assistant, Jeannette Woodruff, reminds him every day that he now is busier then when he served as chair. Griswold’s goal is to continue to make the burn center the largest burn center in the country. The center currently rivals large markets in the amount of burn patients treated. Rivaling large markets treating in volume.

“I cannot think of anybody who at any hour or time of day does not have a rewarding moment from impacting lives,” Griswold said.