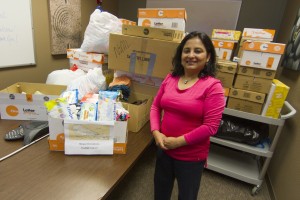 When Texas Tech University Health Sciences Center (TTUHSC) School of Nursing faculty and staff learned that a devastating earthquake had hit the small nation of Nepal, many within the school felt connected to the people of Nepal, as though they were their own family. For one TTUHSC School of Nursing faculty member, however, that sentiment was actually true. Bibha Gautam, Ph.D., R.N., assistant professor and clinical site coordinator in the School of Nursing, has taken comfort in knowing her own family in Nepal is safe, but was heartbroken for the country as the death toll continued to climb each day.

“My family and my husband’s family are safe, but the rest of the country is suffering,” Gautam said. “The entire country is upside down. It is estimated that the death toll could reach up to 10,000.”

Those who survived the earthquake are now tasked with the daunting task of rebuilding their country and their own lives.

As a nurse with expertise in critical care, Gautam was particularly concerned to learn that many are in need of medical care. While the effort to assist these victims is functioning at an enormous scale, the damage to the Nepal infrastructure poses significant challenges.

“Among people who are most affected are children, the elderly and sick and pregnant women,” Gautam said. “Thousands of helping hands have reached the country, but it is unfortunate that thousands of people have not yet been reached in remote villages due to paramount issues of transportation."

When the School of Nursing learned that an earthquake had ravaged a member of their faculty’s home, they jumped at the opportunity to help.

“Two days after the earthquake hit Nepal, I came to work with a heavy heart,” Gautam recalled. “Dr. Melinda Mitchell Jones stopped by and asked about the whereabouts of my family. She told me that my School of Nursing family would like to help me and feels connected to Nepal.”

Gautam was able to find out what the Nepalese need, and with the help of generous TTUHSC personnel, a donation center was created in a conference room.

“Allison Pritchard then initiated a massive campaign for collecting donations from all six TTUHSC campuses,” Gautam said. “This was no small task. Allison worked day and night to make sure that the message went out to everyone and questions were addressed promptly.”

Many within TTUHSC heard and responded to the call for help. The most-desperately requested items were everyday essentials lost in the earthquake and its many subsequent aftershocks.

“The items collected were baby formula, diapers, toiletries, gently used clothing, medications, hand sanitizers and much more,” Gautam said. “Allison and other School of Nursing staff members not only collected the donations, they sorted and boxed them and took them to the parking lot to be picked up by members of the Nepalese Society of Lubbock.”

Gautam said the outpouring of support from TTUHSC encouraged and overwhelmed her and her family.

“I was not expecting TTUHSC to initiate a donation campaign this big,” Gautam said. “Everyone’s commitment to helping the relief and rehabilitation of earthquake-affected communities in Nepal is highly appreciated. We just wanted to help our brothers and sisters with something.”

And as Nepal struggles to rebuild, it is continually hit by wave after wave of violent aftershocks, which frequently occur after a powerful earthquake. Gautam believes that with so much uncertainty in the region, support from communities like TTUHSC will be increasingly important.

“The ordeal is not over yet,” Gautam said. “Yesterday, another tremor nearly as big as the previous one hit the tiny nation killing 70 people and leaving thousands more injured. In addition to collecting the essential items, TTUHSC has assisted the Lubbock Nepalese community in raising funds for the relief effort.”

Gautam says these funds are critical because the cost of revitalizing Nepal could be as much as $10 billion. As donations continue to come, Gautam has increased gratitude for her new home and community at TTUHSC.

“I am so proud to be part of TTUHSC School of Nursing and proud to call Lubbock my home thousands of miles away from home.” Gautam said.