Extreme Heat in the Backseat 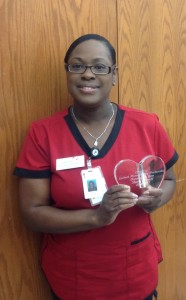 Each year, dozens of children die when left unattended in vehicles. Shockingly, many of these children are not the victim of neglect or abuse, but rather a very simple lapse in memory or the child getting into the car alone. Expert nurses from the Texas Tech University Health Sciences Center (TTUSHC) Larry Combest Community Health and Wellness Center School of Nursing Nurse-Family Partnership work in homes with new parents for the first two years after a baby’s birth to improve the skill and confidence of parents, answer questions that arise throughout the infant’s development and advise on safety issues in and outside of the home.

“There are about 38 child deaths per year, which is roughly equivalent to one death every nine days,” said Shane Pruitt, R.N., MSN, CLC, Nurse Family Partnership nurse.

Many parents do not realize that the temperature inside the car rises much more quickly than outside the car, and on a 70-degree day, the temperature may exceed 100 degrees within minutes. Infants, who have not yet developed the ability to regulate body temperature by sweating, suffer significantly in these conditions and can quickly experience heat stroke and even death.

“A child’s body is more compact and will heat up three to five times faster than an adults’,” Pruitt said.

For parents who have consciously decided to avoid leaving their children in the car, safety precautions can be made to ensure that a child is not left by accident. After all, parents are estimated to lose nearly three hours of sleep each night during their child’s first year of life, and that sleep deprivation can cause forgetfulness. Pruitt recommends practicing these precautions to keep your children safe.

Put your cell phone or purse in the backseat when your child is in the car seat, so that you will have to look back there before you can go to work and about your day.

“It’s a good idea, especially since you will not be tempted to text and drive, which we know we shouldn’t do,” Pruitt added.

Ask your child’s daycare to call you if your child isn’t there at the normal time, in case you’ve inadvertently skipped dropping him or her off. The daycare staff probably won’t mind, especially if you’re typically on time, because they surely know the devastating effects of forgetting a child.

“The most common factor in children being forgotten is a change in routine,” Pruitt said. “When a parent who doesn’t normally take the child is responsible, it becomes very easy to forget, particularly if the child is quiet or still using a rear-facing car seat.”

Since new parents often don’t get enough sleep, exhaustion is a key factor in forgetting their children in a car. Pruitt recommends finding ways to maximize sleep and energy, such as parents taking turns getting up with the baby and taking a step back from extra responsibility like volunteer work—at least until the baby can sleep through the night.

“Any parent will say they could never forget, but they are often exhausted especially if they have more than one young child,” Pruitt said. “And, there are other stresses when a new parent returns to work and is experiencing a change to their routine.”

Children are naturally curious, and once they are able to walk and open doors by themselves, they often unintentionally put themselves in dangerous situations. While parents are asleep or believe their children to be playing in another room, children wander into and trap themselves in cars every year. Pruitt says it’s important to keep doors locked and to create some kind of alarm, like a bell on the front door, to alert you if your child attempts to leave.

“Kids see the car as a fun way to go places,” Pruitt said. “They don’t understand that it can be dangerous.”

Pruitt emphasized that there is no safe amount of time for a child to be left in the car. Even a simple task like walking inside to pay for gas is too dangerous. And, about leaving the car running with the air conditioner on—Pruitt says this too is extremely risky.

“No one wants to wake a sleeping baby, and it’s incredibly tempting to leave them in the car with the air conditioner on,” Pruitt said. “During that short period the child is unattended, you don’t know what could happen even if the car is in view. Someone could see a running, unattended vehicle as an opportunity to steal it with your child inside. We’ve seen that before.”

The community should also be aware of the issue and take the time to notice a child in the car. While our society is incredibly busy, and we don’t feel comfortable peering inside other’s vehicles, keeping an eye out for unattended children saves lives.

“If you see a child left in a car, even in a shady area or with a window cracked, call 911 and do whatever it takes to rescue the child,” Pruitt said.