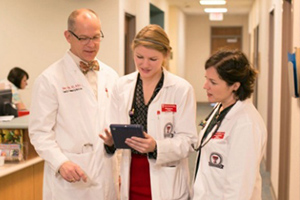 Ron Cook, D.O., MBA, with FMAT students Molly Rooney and Danica McAden.
The Texas Tech University Health Sciences Center (TTUHSC) School of Medicine Family Medicine Accelerated Track (FMAT) program was the featured in the American Academy of Family Physicians (AAFP) News and also was named one of the top 25 health stories by the Texas Medical Board.

According to the AAFP, since 1997, U.S. medical school graduate matches in family medicine and general internal medicine programs have fallen by nearly 50 percent.

In an effort to address the U.S. shortage of primary care physicians, the TTUHSC School of Medicine established FMAT, the first three-year medical degree ever approved by the nationally recognized accrediting authority for medical education. The program allows primary care students at the TTUHSC School of Medicine to complete their degree in three years at half of the cost of the standard four-year program.

In the article, Berk states the program has had its critics, yet the students are successful in completing the competencies and the program is now highly competitive at TTUHSC.

"We made family medicine more prestigious," Berk said. "In the past, when a good student said he was going into family medicine, the faculty would say, 'why are you doing that?' We don't have that here. Now there are more fourth-year students choosing family medicine."