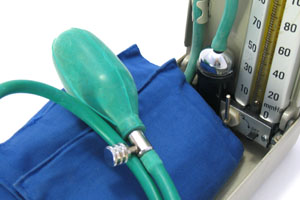 In addition to diabetes (Type 1 and 2), high blood pressure is one of the main causes of CKD, according to the National Kidney Foundation.

The Centers for Disease Control and Prevention estimates that more than 10 percent of adults in the U.S. which is more than 20 million people may suffer from chronic kidney disease (CKD). March is Kidney Disease Awareness month and Sharma S. Prabhakar, M.D., chief of nephrology at Texas Tech Physicians Internal Medicine, said this month can be a good opportunity to get to know your kidney health.

“Your kidneys act as a washing machine for your body,” Prabhakar said. “They remove waste products from your body by filtering them from the blood. In addition, the kidneys produce some vital hormones. Each day as much as 180 liters of blood get filtered. Your blood gets cleaned about 50 times a day. Yet for many people, their kidney health is failing.”

CKD, as defined by the National Kidney Foundation, is said to exist when impairment of kidney function diagnosed by blood and urine tests is present and persists for more than three months.

“When CKD develops, it is almost always progressive and often ends up in end-stage kidney failure and a need for dialysis or kidney transplantation,” Prabhakar said. “Besides the risk factors for kidney failure itself like diabetes and hypertension, the majority of patients with CKD succumb to cardiovascular disease even before they reach end-stage renal failure because several factors like reduced kidney function and protein excretion in urine predispose heart disease and stroke.”

Prabhakar said while there are about half a million patients on dialysis and in need of a kidney transplant, the exact number of patients with CKD is unknown. Driven primarily by the need to address the disease and financial burden of CKD, the Texas government commissioned a task force in 2007 to develop strategies for kidney disease prevention in the state. As part of the efforts, a study was conducted in West Texas led by the investigators at TTUHSC to examine how frequently CKD is present in the general population and what risk factors predispose people to the disease.

Almost 1,600 people from Lubbock and the surrounding counties participated in this unselected random screening study, where information about medical history, blood pressure and laboratory testing was done. The results showed more than 17 percent (almost 1 in 5 people) had CKD and more than half of them had advanced CKD.

“Most were unaware they had the disease,” Prabhakar said. “This is alarming since this group has a high disease burden and poor outcome. Given the trends in demographics and census growth projections, the number of patients with CKD is estimated to triple in the next 10 years. TTUHSC estimated the current cost of caring for CKD patients is more than $19 billion in Texas and it is expected to increase to more than $50 billion by 2020.

People with CKD often exhibit no symptoms until the disease is advanced. At that advanced stage most known therapies are ineffective in halting disease progression. Early diagnosis and treatment aimed at improving the prognosis are key.”

How Can You Prevent CKD?

Prabhakar said salt and water restriction is necessary and useful in patients with high blood pressure and swelling. Food and drinks rich in phosphorous like red meat and sodas need to be restricted since patients with CKD cannot excrete phosphorous. High phosphorous reduces the blood calcium levels and stimulates a hormone called paratharmone, which can cause bone disease and calcium deposition in blood vessels. Foods rich in potassium (grapes, oranges, orange juice, tomatoes, etc.) also need to be restricted in the advanced stages of CKD. Another important issue in CKD patients is the wide prevalence of vitamin D deficiency, which also needs to be treated. Recent studies have shown that reducing meat and meat products and increasing the proportion of fruits and vegetables would slow down kidney disease progression by reducing acid produced in the body.

“The ideal way to address CKD is prevention,” Prabhakar said. “Better management of precursor health problems like diabetes, obesity and hypertension may reduce the occurrence of CKD. Some drugs used to treat high blood pressure have been shown to decrease protein loss in urine and slow down kidney disease not only in diabetics but also in others.”

What is your kidney IQ? Take the quiz.