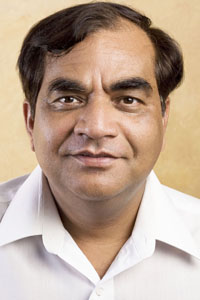 Reddy will replace Grammas after 10 years.

Following an extensive national search, TTUHSC has announced the appointment of P. Hemachandra Reddy, Ph.D., as the new executive director and chief scientific officer of the Garrison Institute on Aging.

Reddy comes to TTUHSC from the Neurogenetics Laboratory, Neuroscience Division, Oregon National Primate Research Center at Oregon Health and Science University (OHSU) where he serves as an associate scientist. The focus of his research is on understanding the molecular and cellular bases of aging in age-related neurodegenerative diseases such as Alzheimer’s and Huntington’s.

Reddy received his B.Sc. and M.Sc. in biology from Sri Venkateswara University, and his M.Phil in human cytogenetics from Delhi University, both located in India. He was a Commonwealth Scholar (1990-1993) before receiving his doctorate degree in 1994 in human genetics from University College, London. Reddy did his postdoctoral training from 1995-2000 at the National Human Genome Research Institute of the National Institutes of Health (NIH).

He then joined the OHSU-Neurological Sciences Institute faculty in July 2000 and the Oregon National Primate Research Center in July 2008. Reddy was a standing member of the Veteran Affairs Merit Review Study Section and served in several NIH study sections. He currently is a standing member of the Neuronal Oxidative Metabolism and Death study section and principal investigator on two NIH RO1 grants.

He is an elected Fellow of the American Neurological Association and a member of the New York Academy of Sciences, Society for Neuroscience, Indian Society of Human Genetics, the Galton Institute in London, and the Alzheimer’s Research Forum, the recipient of numerous honors and awards, the author or co-author of more than 80 peer-reviewed publications and invited guest speaker at several national and international conferences. Reddy serves as mentor and advisor to junior faculty, post-docs, fellows and interns. In 2003, he was the recipient of the Mentor Appreciation Award from OHSU.

Reddy will take the place of Paula Grammas, Ph.D., who now serves as director of the Texas Alzheimer’s Research and Care Consortium in Austin. Grammas served as executive director for nearly a decade. Under her leadership, the institute expanded to include research, community outreach and education programs. Doug Stocco, Ph.D., chaired the search committee.