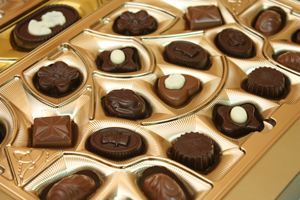 Chocolate, especially dark, has high levels of an antioxidant known to protect the body and its cells from damage.

With more than 36 million heart-shaped boxes sold each year on Valentine's Day, chocolate has clearly melted its way into our hearts.

The good news is, Ron Cook, D.O., Texas Tech Physicians Family Medicine, said your love for chocolate may be good for you.

"Chocolate causes the brain to release endorphins, the chemicals that make us feel good," Cook said.

"There are research studies that show chocolate, especially dark chocolate, have high levels of antioxidants called catechins," Cook said. "Catechins are a type of antioxidant found in the leaves of some tea plants, but smaller amounts can be found in other foods like red wine, berries, apples and chocolate. These antioxidants help protect the body from disease and cells from damage."

Chocolate also contains high levels of another chemical called polyphenols, Cook said. Polyphenols have been shown to reduce the risk of heart disease by blocking a fat-like substance in the blood stream that prevents clogging of arteries.

In a study released this year, the Karolinska Institute in Stockholm found chocolate could be the key to reducing stroke risk. For 10 years, researchers followed more than 37,000 men, discovering subjects who ate about 2 ounces of chocolate a week lowered their risk of stroke by 17 percent during that time span.

"The Swedish study is one of many recent studies that have looked at the benefits of chocolate," Cook said, "in this case proving potential heart and vascular benefits for men."

Despite the favorable findings, Cook stressed chocolate lovers should not let themselves get carried away this holiday season, or any time.

"Chocolate also has some bad effects," Cook said. "It is high in fat and calories. If you need to feed your chocolate craving, it is okay to eat a little, but consume everything in moderation."