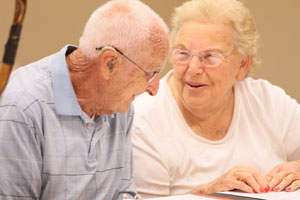 Along with traditional speech therapy, music has been shown to facilitate language in people suffering from speech and language disorders like aphasia.

On the surface, hearing the familiar strains of “Peace in the Valley” coming from the Quaker Church of Christ Unity Center isn’t anything out of the ordinary.

But there is something truly special about the 15-member choir who meets there for an hour each Tuesday morning during the summer. Each member, ranging from age 30 to 82, has survived a stroke or some type of traumatic brain injury and has developed a language disorder known as aphasia.

Tune In to Aphasia

“It’s a seven-letter word, and it's no harder to spell or pronounce than autism or Alzheimer’s," said Melinda Corwin, Ph.D., CCC-SLP, clinical supervisor for the School of Allied Health Sciences’ Stroke/Aphasia Recovery (STAR) Program. "It’s more common than Parkinson’s disease, but very few people have heard of it and know what it is."

Aphasia is an acquired communication impairment that affects a person’s ability to express him or herself through speech and writing, and/or to understand the speech and writing of others. The disorder is often a result of stroke, head injury, a brain tumor or other neurological problem.

Recent studies have shown that music, melody and rhythm, along with traditional speech therapies like cognitive linguistic therapy, programmed stimulation and stimulation-facilitation therapy, can help facilitate language for people with aphasia and other language disorders, Corwin said.

In fact, since a bullet to the brain left her in critical condition, former Congresswoman Gabrielle Giffords has relearned how to talk partly thanks to music therapy, according to an ABC News article.

While learning about aphasia in her graduate speech-language pathology classes, Brenna Price, who was an undergraduate music major, was inspired to combine her two passions and form Lubbock’s first aphasia choir. The group had its inaugural rehearsal on June 3.

“Some people with aphasia may only be able to say five words in an hour, but they can come here and sing all the words to “Amazing Grace” just because they’re using a different part of their brain,” Price said. “It’s a chance to get them to communicate a little and be able to talk.”

Price said while the choir will perform songs from a variety of genres including religious, classical, pop and folk, at an upcoming event on Aug. 7, most selections are well known and simple to learn.

“They kind of have to be songs they are familiar with because some people can’t read, or it’s just hard for them to memorize words,” Price said.

Stroke survivor Gerry Fulton, has struggled with aphasia for 14 years. He said he heard about the choir through a friend of his, and has been participating ever since.

“I love coming to aphasia [choir],” Fulton said. “I was the first one here.”

Price said she is proud of the progress the group has made and hopes that, like similar choirs throughout the country, Lubbock’s aphasia choir will grow into a year-round program that will continue to help people express themselves.

“People are really supportive and I think the members have enjoyed it,” Price said. “They have lots fun and it’s a good way to get out into the community and be around others with aphasia. It’s good for them to be able to have friends.”