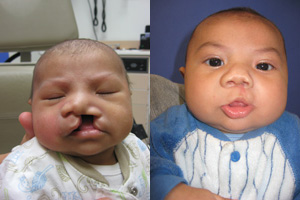 If the lip is open up to and including the floor of the nose (above left), it is called a complete cleft lip.

Parents dreaming of the arrival of a new bundle of joy hope for a healthy baby. Yet, many babies are born with birth defects. According to the March of Dimes, more than 120,000 babies in the U.S. are born each year with a birth defect.

Cleft lip and cleft palate occur in about 1 or 2 of every 1,000 American babies each year, making it one of the most common major birth defects, according to the Nemours Foundation.

"In utero an embryo develops rapidly,” Demke said. “Before four weeks gestation it is normal for the upper lip to be cleft. But by seven weeks the lip segments have fused in most embryos to form an intact upper lip. Only when this fusion fails does a cleft lip result."

Clefts of the lip can sometimes be detected in utero using advanced ultrasound technology, but clefts of the palate are rarely seen on ultrasound, Demke said. Knowing about a cleft lip and/or palate before a baby is born enables parents to meet with a cleft team to discuss what to expect, surgery and long-term management.

In most cases of cleft lip and/or cleft palate there are no other abnormalities or genetic problems, Demke said. It is believed that a combination of environmental triggers and underlying genetic factors contribute to clefts, but there are known syndromes associated with cleft lip and/or palate.

"A cleft palate can be a clue to look closely and rule out other abnormalities that might be involved such as heart problems,” Demke said. “A visit with a geneticist can be helpful to make a diagnosis and to help with family planning and understanding risks of inheritance that are not always straight-forward." 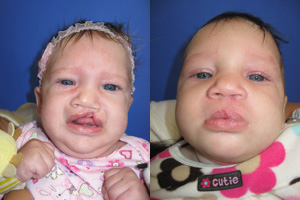 Demke said many parents worry when they first see their baby's cleft lip or palate, but they can typically be closed when the child is 2 to 3 months old.

Demke said parents may feel discouraged when they first see their baby's cleft, but should remember cleft lip and cleft palate can be corrected. Cleft lip is typically closed surgically when a baby is 2 to 3 months old, Demke said. Palatoplasty, or surgically closing off and separating the roof of the mouth from the nose, is typically performed when a baby is 9 to 12 months old.

"Operating too early leads to problems with growth restriction of the upper face, and waiting too long can lead to bad speech habits that can be challenging or impossible to overcome,” Demke said. "Children with cleft lip and palate frequently face problems with hearing loss and usually require one or more sets of temporary tubes to help with their ears."

Babies with craniofacial deformities may also have problems with feeding and weight gain, Demke said. Large clefts of the palate can make it difficult for babies to breastfeed because they can’t generate suction, and as a result may require special bottles and nipples.

Because neonatal surgery is risky, Demke said his advice to expectant mothers is to do everything they can to prevent birth defects in the first place. He said pregnant women can reduce their babies’ risk of cleft lip and palate by being aware of risk factors including smoking, diabetes, seizure medications, exposure to pesticides, lack of folic acid and alcohol and drug use.