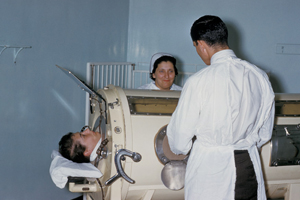 Pictures of polio patients enclosed in iron lungs were common during the 20th century.

No one likes shots. But the diseases prevented by vaccinations, like polio, are more than a prick in the arm. Images of former President Franklin D. Roosevelt wheelchair bound and children infected with polio lying in iron lungs or with leg braces are reminders of how devastating polio was.

Richard Lampe, M.D., chairman of the Department of Pediatrics, said parents feared the disease and many would not let their children out of the house.

“I grew up in an era when every summer parents were afraid of their children contracting polio,” Lampe said. “Parents were afraid to let children use swimming pools in the summer for fear of getting polio. I can remember going to a church on a Sunday receiving a sugar cube with the oral polio vaccine as part of a community effort to halt the disease.”

Lampe said polio is caused by a virus and enters the body through the mouth. In the ‘50s it caused paralysis or death, usually by paralyzing the muscles that helped patients breathe.

“I practice in the United States where the last case of Polio was in 1979,” Lampe said. “But polio has not been eliminated from the rest of the world. The only way to be protected is to receive the vaccine.”

Lampe said children should get four doses of the polio vaccine at these ages:

Some combination vaccines (several different vaccines in the same shot) contain the polio vaccine. Children getting these vaccines may need one more (a fifth) dose.

“Who would not want their child to be protected from a preventable cause of paralysis or death,” Lampe said. “Vaccines are safe and effective and are our most effective way to prevent polio. Iron lungs and respirators belong in museums—not to treat polio when it is preventable.”

As a result of the polio vaccine, the World Health Organization certified the Americas polio free in 1994; the Western Pacific followed in 2000, and Europe in 2002. Since it was first administered in 1954, the method of delivering the vaccine has changed from an injection to the oral polio vaccine and the actual make-up of the vaccine has been altered.

“As a child, I remember a neighbor friend who contracted polio and was paralyzed the rest of his life and had to walk with crutches,” Lampe said. “I can guarantee you that his mother wished the polio vaccine came five years earlier.”