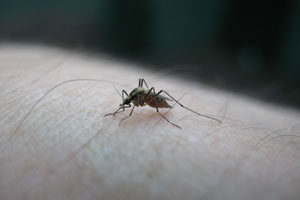 The West Nile virus is transmitted to humans through the bite of an infected mosquito.

With the recent rain in West Texas comes an influx of mosquitoes and a rise of reported West Nile cases in Dallas/Fort Worth.

Ronald Warner, DVM, Ph.D., professor in the Department of Family and Community Medicine, said the last two weeks of August have been the historic peak of West Nile virus transmission to humans, however, a person can be infected until the first frost if precautions are not taken.

“There was a epidemic of the West Nile virus across the U.S. from 2000 to 2006 and then it died down. Now six years later, we are seeing more activity,” Warner said. “Estimates in Dallas County reveal that seven cases of serious or severe disease have been reported for every 100,000 people. West Texas areas should not have as serious a problem as the Dallas/Fort Worth area is experiencing. That area was hit with early spring and summer rainfall, whereas areas to the northwest of I-35 have continued to experience drought conditions.”

Warner said the West Nile virus and diseases like the St. Louis encephalitis and eastern equine encephalitis are transmitted through the bite of an infected mosquito. Songbirds serve as reservoirs for the viruses, spreading them into the mosquito population and, in turn, to horses and humans.

One out of 140 people infected with the West Nile virus can have severe effects of the disease. Warner said 80 percent of people never know they have been infected and 20 percent may suffer only a mild case of the illness. The most common symptoms of West Nile illness include fever, muscle aches and headache similar to the flu. Yet, unlike flu symptoms, a person infected with West Nile does not suffer from a sore throat, upper respiratory problems or a runny nose.

Warner stressed that many people forget about the West Nile virus until there is an outbreak again. 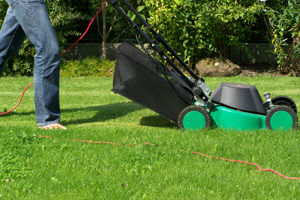 “Society becomes complacent to diseases and stop taking precautions,” Warner said. “If you look at it from a historic perspective with polio, years ago there were 25,000 to 35,000 cases of severe paralytic polio reported each year. People were horrified to think they might get polio. There is now a vaccine to prevent the disease, but many have forgotten about the days when the disease would strike and injure and kill so many victims."

Warner said the key is to remember there are steps to take to prevent disease. Taking simple precautions about your activities and home environment can limit your exposure and reduce mosquito bites.

Warner said residents should take these precautions to protect themselves from mosquito bites:

“The male mosquito feeds on plant juices," Warner said. "Therefore, mosquitos are attracted to certain scents. There is little or no science to back up whether or not mosquitos are more attracted to a person who eats certain foods. But bananas, soft cheeses such as Brie and fruits are used in mosquito traps."

Warner said the good news is that after the recent rainfall many areas experienced, it may take 10 days to two weeks before a significant mosquito population is seen.

“West Texas should not expect to see large mosquito problems now that cooler weather and less hours of sunlight are just around the corner,” Warner said. “With cooler evenings and mornings, mosquito eggs and larva don’t develop as quickly, and the adults are not as active. The key is to not panic if you are bitten. Not all mosquitoes are infected, possibly as few as 15 percent. Ask your doctor if you have any signs, symptoms or questions that concern you.”