Endometriosis: It's All in the Family 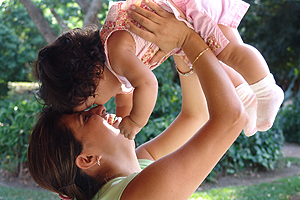 Endometriosis can lead to infertility or difficulty conceiving, but treatment is available.

Many family traits are great to have, but one that can run in the family needs to be treated. Endometriosis is a condition that occurs when cells from the lining of the uterus grow in other areas of the body mainly in the pelvis. This can lead to pain during menstruation, intercourse and problems getting pregnant. Although endometriosis is typically diagnosed between ages 25 to 35, the condition probably begins about the time regular menstruation commences.

Are You at Risk?

If you are a woman who has a mother or sister with endometriosis, then it is much more likely you will develop endometriosis than the general population.

Farooqi said the main symptoms of endometriosis are:

“Some women may not have any symptoms,” Farooqi said. “Some women with a large number of endometrial implants in their pelvis have no pain at all, while some women with milder disease have severe pain.”

The cause of endometriosis is unknown. One theory is that the endometrial cells shed during menstruation and travel retrograde through the fallopian tubes into the pelvis where they implant and grow. This is called retrograde menstruation. This backward menstrual flow occurs in many women, but researchers think immune systems may be different in women with endometriosis. Another proposed theory is called coelomic metaplasia where the peritoneal cells in the pelvic peritoneum, under the influence of female hormones, become endometrial cells and function as such.

Estrogen feeds endometriosis. Each month there is an estrogen surge, which causes the uterine lining to thicken to prepare for pregnancy. Then the estrogen levels drop and if there is no fertilization of the egg, the lining of the uterus sheds and a woman has her period, which causes retrograde flow to the pelvis causing new implants to form and stimulate the existing implants. These respond to estrogen and grow causing pain, scarring and disruption of tubal anatomy. The inflammatory response to these growths, via the immune system, makes this a monthly occurrence.

With Treatment, There is Hope

Farooqi said some treatments control the hormonal cycle in a woman’s body, to prevent monthly menstruation and break the circle of growing endometriosis.

“This is achieved by hormone drug therapy through birth control pills, high dose progesterone or central suppressants like GnRH agonists. This type of treatment is temporary and only successful for milder cases of endometriosis where the growths are relatively small,” Farooqi said. “In more severe cases, surgery is usually needed to cauterize the implants, remove scar tissue and the endometriomas.”

Farooqi said the definitive diagnosis of endometriosis can only be made by histopathology of lesions removed at surgery usually laparoscopic surgery.

Endometriosis can lead to problems getting pregnant. Not all women, especially those with mild endometriosis, will have infertility. Laparoscopy to remove scarring related to the condition may help improve your chances of becoming pregnant and reduce pain.

Farooqi said it’s important to see your health care provider if you’re experiencing pain and talk about your symptoms.

“Women tend to down play the symptoms,” Farooqi said. “My message to all pelvic pain patients is that it is okay to tell your family and gynecologists. With treatment there is hope just ask.”