A Force to be Reckoned With 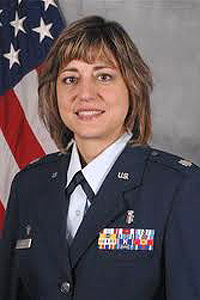 Notturno-Strong served in the U.S. Air Force for more than 20 years before she retired in October.

Former U.S. Air Force commander Debra Notturno-Strong, R.Ph., will begin as regional dean of the School of Pharmacy at Abilene and a professor in the Department of Pharmacy Practice on Nov. 1.

“What I’m looking forward to most is continuing the successes established at the SOP Abilene campus and to carrying forward the commitment and advancement of our profession,” Notturno-Strong said. “As this is my second career, I absolutely embrace the opportunity to be in a position to make a difference in the lives of others.”

Notturno-Strong retired from the U.S. Air Force in October after 24 years of service. She most recently served as commander of the 7th Medical Support Squadron and deputy commander of the 7th Medical Group stationed at Dyess Air Force Base. She was responsible for the health, welfare and morale of 108 officers, enlisted and civilian personnel in the areas of pharmacy, laboratory, resource management, medical logistics, medical readiness, information systems and patient administration.

Prior to her arrival at Dyess, Notturno-Strong was stationed at Lackland Air Force Base in San Antonio where she initially served as inpatient pharmacy flight commander at Wilford Hall Medical Center and directed the only Department of Defense bone marrow transplant pharmacy in the U.S. Air Force. She later served as director for pharmacy operations at Lackland and was responsible for the Air Force Medical System’s largest and most complex pharmacy operation.

“I have always enjoyed management by wandering around, not as a micro-manager, but as a team player with a desire to know what people are faced with and dealing with and what opportunities we can explore together,” Notturno-Strong said. “I have a passion for people they are our most important asset and doing the right thing.”

Notturno-Strong grew up about 20 miles north of Boston in Ashland, Mass. Her father served in the U.S. Air Force and U.S. Air Force Reserve for 38 years, which motivated her to join the military.

“My parents met when my dad was stationed in Germany and they were married for 47 years,” Notturno-Strong said. “I lost my mom in 1999 and my dad in 2008; I owe my work ethic, my caring nature and my commitment to education to them.”