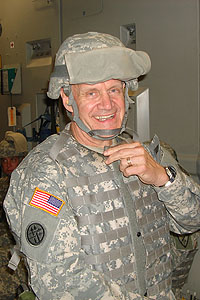 Lampe is a recipient of the "A" Prefix Designation, the highest level of military recognition for a physician.

His small patients and medical students know him as Dr. Lampe, but many may not be aware that Richard Lampe, M.D., professor and chairman of the Department of Pediatrics, proudly served in the United States military.

This Veterans Day this nation will be celebrating and honoring our veterans, which include the men and women who provide health care to our military.

An Honor and Privilege

Lampe was awarded the American Academy of Pediatrics (AAP) Section on Uniformed Services Outstanding Service Award in 2010. The AAP award is a special recognition in rotation among the U.S. Army, Navy and Air Force to a present or former Uniformed Services Pediatrician for outstanding lifetime services to the military and pediatrics.

Lampe, who is now a retired colonel, served in the U.S. Army from 1968 to 1992. He also completed two voluntary deployments, one in 2004 for Operation Enduring Freedom Landstuhl in Germany and in 2007 for Operation Iraqi Freedom 324th MPBN in Baghdad.

He said during medical school there was a high likelihood of a draft for most physicians in the late 1960s.

“The Army offered good training and since I knew I would be drafted, I volunteered to go early for good training,” Lampe said. “I stayed because of the people I practiced with, the patients and support of my spouse. What a privilege to serve my country, absolutely no regrets.” 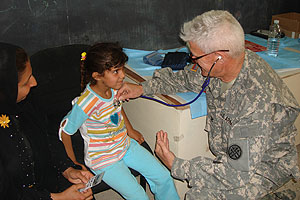 After first entering the military for medical training, Lampe stayed because of his patients and fellow physicians.

Lampe said since 9/11, recognition of how important service is to the nation is more appreciated, but most veterans do not put themselves first.