And the Award Goes to... 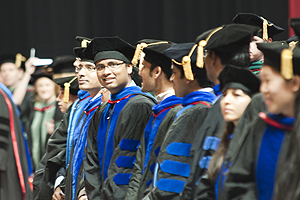 President Mitchell and Keynote Speaker Cooper welcomed more than 1,000 students into the field of health care on Saturday during commencement.

As of Saturday, more than 700 graduates now hold something powerful in their hands your health.

President Tedd L. Mitchell, M.D., presided over the commencement ceremony on Saturday with students from all schools.

Mitchell said commencement is an exciting time for faculty, students and family members.

“I have the honor of not only presiding over this ceremony, but also witnessing the celebration of all their hard work,” Mitchell said. “These graduates have received an exceptional education and have endless possibilities of contributing to patient care and research across this country.”

May graduates (and approximately another 400 students as December and August graduates) received degrees in various health disciplines. And while it was a special day for all, a few were recognized with hooding and student awards presented at individual school convocations prior to the commencement ceremony.

The Dean’s Recognition Award for the Graduate School of Biomedical Sciences was awarded to Sarah Renee Willis, M.S., and the Outstanding Graduate Student selected by students and faculty, Vivek Gupta, Ph.D.

The Gold Headed Cane was presented to Jamie Wilkerson, M.D. The Gold Headed Cane is a symbol for excellence in the art of medicine and in the care of patients. Faculty and students selected Wilkerson as the individual who best exemplifies those attributes most desirable in a competent and caring physician. 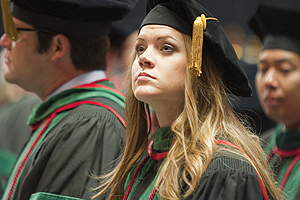 Special awards were given to a select group of students for their outstanding achievements at each school's convocation ceremony.

The Dean’s Award for Excellence in Nursing-Undergraduate was presented to Kathleen M. Martinez, R.N., BSN. This award recognizes graduating students who have best exemplified excellence in nursing through practicing holistic philosophy in patient care.

Antonia Leigh-Pettit Edgar, Pharm.D., received the Bowl of Hygieia award for the School of Pharmacy. The award is an internationally recognized symbol for the profession of pharmacy. Universally depicted as a snake wrapped around a bowl, it comes from Greek mythology. Hygieia was the daughter of Zeus and the goddess of purity. Her bowl represents medicine and the snake indicates potency. The Bowl of Hygieia symbolizes “pure and potent medicines.” Elizabeth Ann Riney, Pharm.D., earned the highest GPA in the School of Pharmacy.