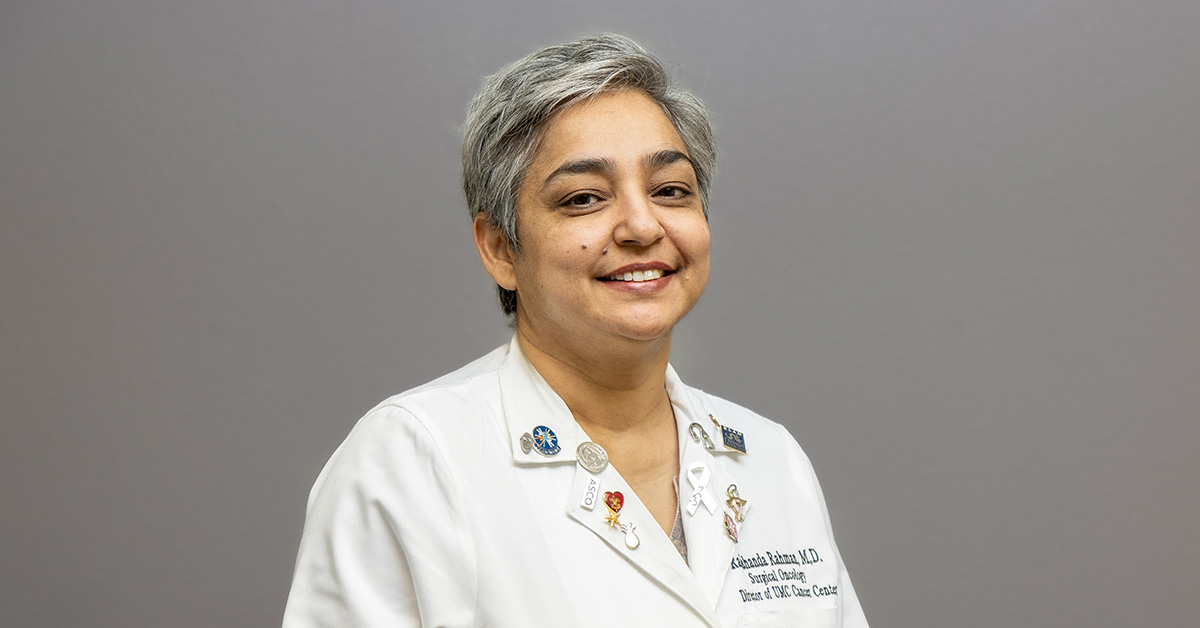 In its most recent funding cycle, the Cancer Prevention & Research Institute of Texas (CPRIT) awarded a $2,499,999 grant extension to Rakhshanda Rahman, M.D., professor of breast surgical oncology at the Texas Tech University Health Sciences Center School of Medicine and the founding executive director of the school’s multi-campus Breast Center of Excellence (BCE). The BCE was the first breast center in West Texas to be accredited by the National Accreditation Program for Breast Centers

The grant, “Access to Breast and Cervical Care for West Texas (ABC24WT) Maintenance and COG-9 Expansion,” will allow Rahman and the BCE to provide no-cost mammograms and Pap smears to underinsured and uninsured women in the Permian Basin, which makes up the Texas Regional Council of Government-9 (COG-9).

Texas is divided into 24 regions, each served by a voluntary organization of local government entities that coordinate programs and services to address needs that cross jurisdictional boundaries. COG regions currently served by the program include the Panhandle (COG-1), South Plains (COG-2) and Central West Texas (COG-7).

Rahman, who also is medical director for the UMC Cancer Center, said the grant’s focus would remain on providing breast and cervical cancer screening and prevention services to underserved women. With the easing of pandemic restrictions, she expects to see a noticeable increase in the number of women who take advantage of the free program.

“The last couple years of the previous grant suffered with all the lockdowns and the screening centers that were shut down for the pandemic,” Rahman said. “We are seeing a big uptick as things are reopening, so we are expecting a significant jump from the last grant to this grant because [progress on] that grant slowed down during the pandemic.”

The grant represents a continuation of CPRIT funding initially awarded to Rahman in 2010 that led to the establishment of BCE’s Access to Breast Care for West Texas (ABC4WT) program. A 2014 grant extension allowed BCE to add cervical screening services and create the Access to Breast and Cervical Care for West Texas (ABC²4WT) program. Rahman serves as the project director for both programs.

Due to the programs’ success, BCE received additional CPRIT funding to develop ABC4WT dissemination products in 2016 available to other institutions and organizations interested in acquiring education, outreach and service programs modeled after ABC4WT. And in 2019, Rahman and the BCE received a third extension that allowed the program to expand its programs to Central West Texas (COG-7), which encompasses Abilene and the surrounding area.

“Some counties in Utah come close to us for lack of [Human Papillomavirus Virus or HPV] vaccinations, so we are a sore point, if you will,” Rahman explained. “Texas overall is second only to Utah in not getting vaccinations and prevention of cervical cancer, and we currently rank number 47 in the country for vaccination rates, which is very unfortunate.”

As of June 2021, the ABC4WT and ABC24WT programs have contacted more than 5.2 million women via social media, television, radio and newspaper. The BCE’s strategic approach of public-private-community partnerships has led to approximately 39,000 direct educational contacts, allowing it to provide more than 10,000 mammograms, 2,000 Pap smears and 8,500 HPV shots. The programs also have led to the detection of 154 cancers or cancer precursors, and all of those patients received the highest quality treatment under Rahman’s care.