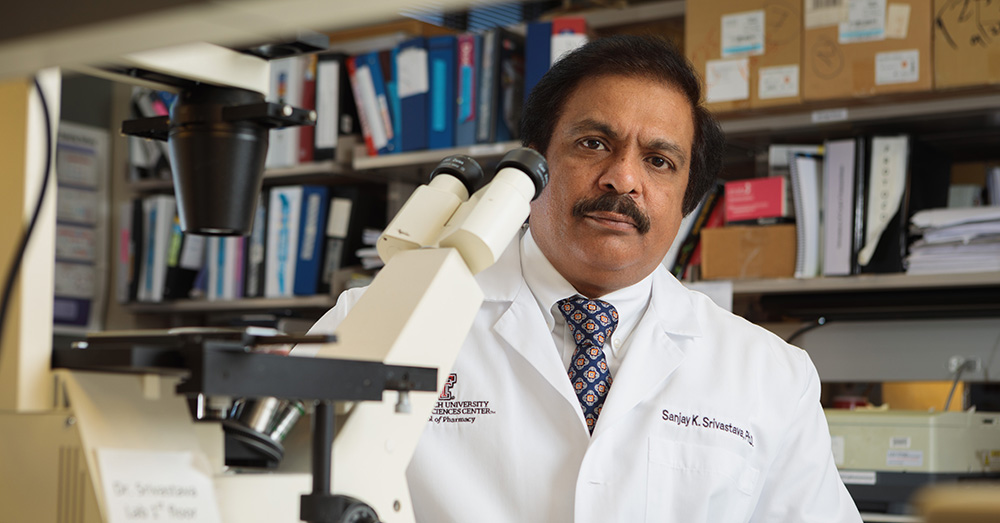 To treat some of the psychosis issues associated with Parkinson’s disease, physicians often prescribe pimavanserin, an antipsychotic drug that acts within the brain to prevent hallucinations and delusions. Because of its ability to prevent or reduce these symptoms, pimavanserin also has been studied as an antipsychotic treatment for other neurological conditions such as Alzheimer’s disease, schizophrenia and depression.

Those efforts recently earned Srivastava a U.S. patent for repurposing pimavanserin to treat various types of cancer. Srivastava, who chairs the Department of Immunotherapeutics and Biotechnology at the Texas Tech University Health Sciences Center (TTUHSC) Jerry H. Hodge School of Pharmacy, said the patent, titled “Compositions and Methods for Treating Cancer,” covers all applications of the drug in the field of cancer.

“We can cover all the variants with this patent,” he said. “If we change the structure of this compound, that is covered (by the patent), and if we make any formulation, that also is covered. If anybody wants to use pimavanserin as a cancer therapy, our patent would have to be considered as part of that drug development process because basically, all of the different aspects associated with this drug are covered by this patent.”

Srivastava began the research that led to the patent by investigating non-cancer drug candidates he hypothesized had the potential for treating brain cancer. He said the rationale behind repurposing drugs is that these drugs are already approved and are being used by patients in clinic. 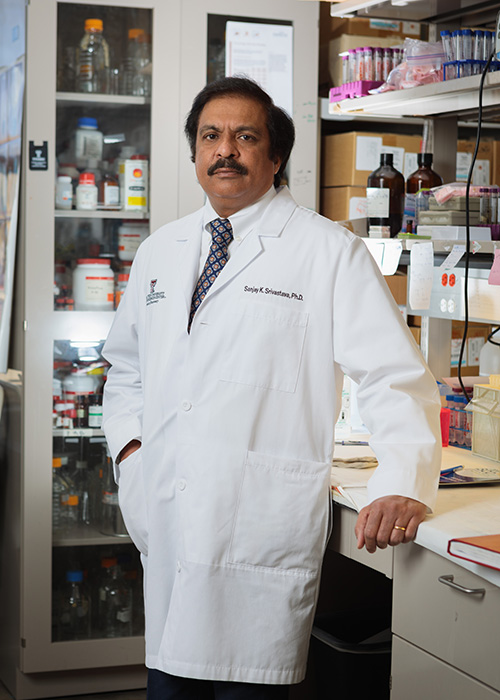 “If we find a new purpose for these drugs in different disease models, we can fast track the process and take the drugs to the patients much faster,” Srivastava said. “We gained a comprehensive understanding on the clinical perspective of these repurposed drugs during our preclinical evaluation. This can save us an enormous amount of time and money.”

Srivastava said the primary hurdle to treating brain tumors is finding an effective drug that can pass through the blood-brain barrier. Formed by cells that line the blood capillaries that supply parts of the central nervous system, including the brain, the blood-brain barrier is a semipermeable barrier responsible for protecting the brain from substances that could be harmful. This includes regulating or preventing the transfer of some drugs and chemicals from the blood to the brain.

“The blood-brain barrier is a good thing, but the flip side is that some drugs cannot cross the barrier and are then ineffective,” he said.

Because antidepressant and antipsychotic drugs are able to cross the blood-brain barrier and reach to the brain, Srivastava and his team initially studied penfluridol as a potential treatment for brain cancer. Penfluridol is a first-generation antipsychotic drug that became available in the late 1960s to treat chronic schizophrenia, acute psychosis and Tourette syndrome.

To take their investigation to the next level, Ramachandran, who is named as the patent’s co-inventor, planted tumors into the brains of mice and then treated the mice with pimavanserin. The findings demonstrated that pimavanserin significantly suppressed the growth of brain tumors in animal models.

“That was very exciting for us,” Srivastava said. “We immediately filed a patent for its application in cancer because nobody had ever shown the anti-cancer effect of pimavanserin; it was only being used for Parkinson’s disease psychosis. What distinguishes pimavanserin from other repurposed antipsychotic drug candidates for cancer is its high selectivity toward the 5-HT2A (serotonin) receptor. This property enables pimavanserin to be one of the few second-generation antipsychotic drugs with potentially low toxicity.”

Once Srivastava presented his team’s findings at a cancer research conference in Chicago, he was immediately contacted by large pharmaceutical companies involved with pimavanserin. Discussions for partnership and development efforts are underway with industry, both domestically and internationally. The Office of Research Commercialization continues commercialization strategies and partnership discussions while continuing to build a strong patent portfolio around the technology, a necessity for any drug to reach the market.

Srivastava and his team also are looking for clinical partners who would like to conduct a window-of-opportunity trial with pimavanserin for a short time period in patients who are waiting for surgery or receiving other therapies. He is especially interested to see how the drug works in patients with glioblastoma, a type of brain tumor he described as being almost a death sentence for patients. Those patients are currently treated with temozolomide, a chemotherapy drug that can extend a patient’s life but doesn’t cure the cancer.

“We have shown in our research that pimavanserin can potentiate or enhance the effect of temozolomide by inhibiting certain proteins that are responsible for causing resistance to temozolomide in cases of glioblastoma,” he said.

In addition to finding funds for the trials, Srivastava said his team needs to identify clinicians who are willing to participate in the trials so they can determine whether or not pimavanserin has any active effect against cancer in humans. Once the trials are planned, Srivastava said it generally takes at least five years before investigators are confident the drug produces no significant side effects for patients and is efficacious.

Because pimavanserin is already approved for use in humans, that timeframe could accelerate, but  Srivastava said there is no way to predict when the drug could be available to cancer patients until the clinical trial process is complete.

“This is why I hope that we can get the support of some clinicians to perform pilot clinical trials in some patients,” Srivastava said.