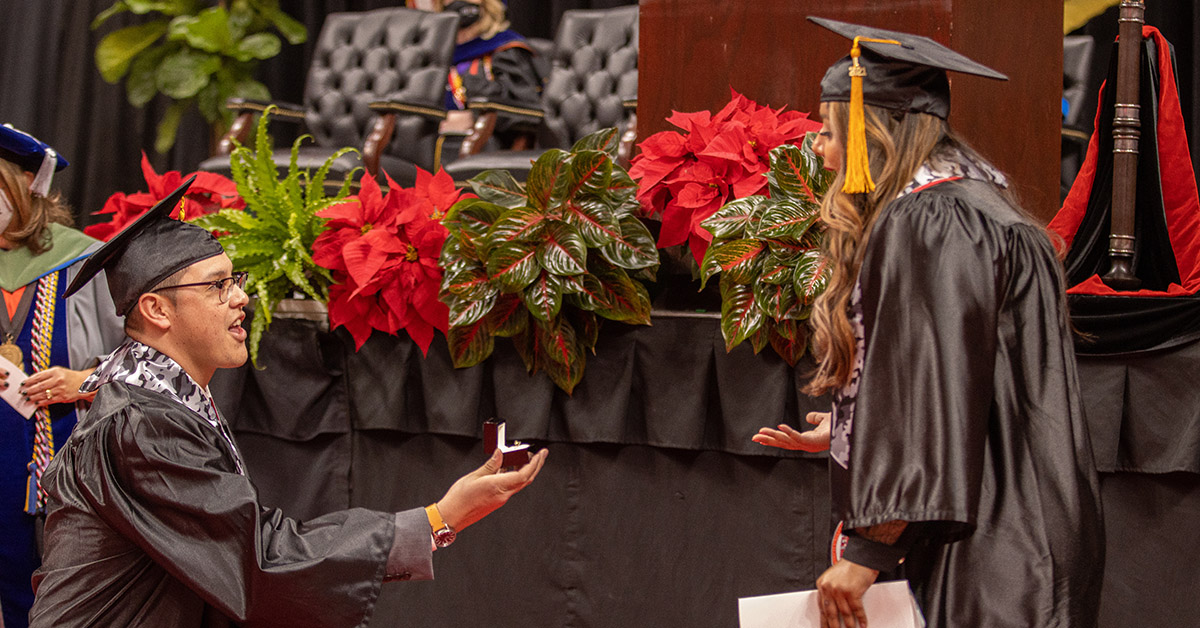 Since the first class in 1981, more than 17,100 nurses have been graduated from the Texas Tech University Health Sciences Center (TTUHSC) School of Nursing. But now two alumni can say they became engaged to be married at commencement.

Veteran to Bachelor of Science in Nursing (VBSN) graduate Devin Del Rio decided to propose to his girlfriend and classmate Leianne Maugeri because he wanted to give her a memorable proposal. 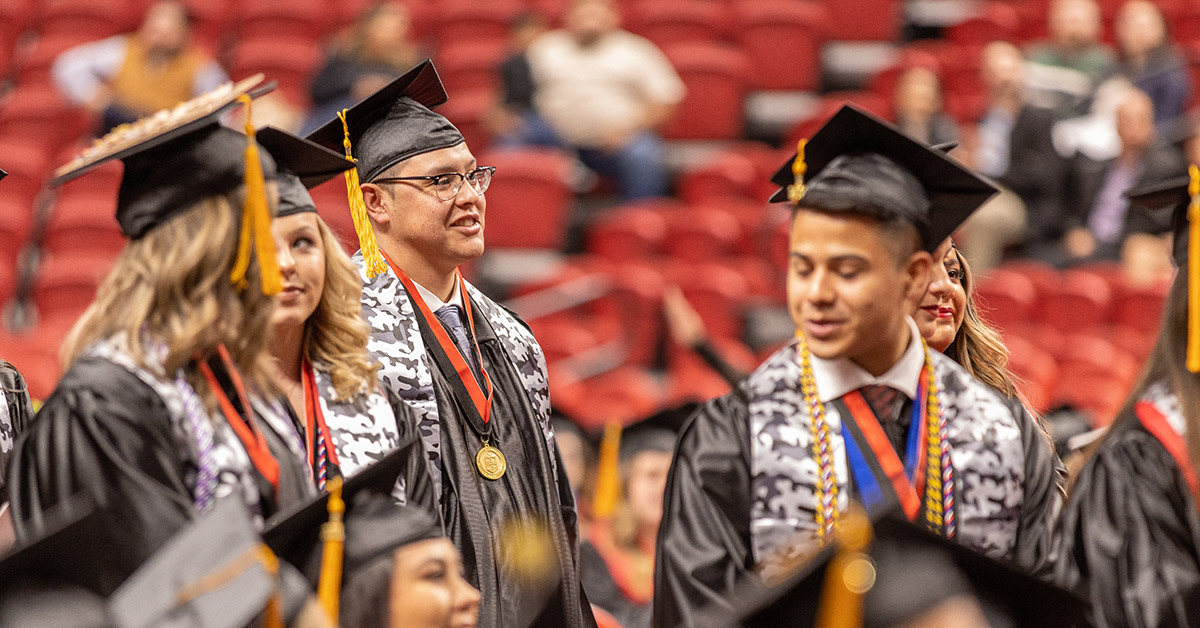 “I’ve always felt Leianne deserved the best,” Del Rio said. “She’s a wonderful person who deserves nothing less. My hope is that giving her a fairytale proposal she’ll never forget will show that.”

On Dec. 11 Del Rio proposed to Maugeri in front of the crowd at United Supermarkets Arena during the graduation ceremony.

“Every spring, summer and fall, we look forward to creating a memorable graduation for our students,” School of Nursing Dean Michael L. Evans, Ph.D., R.N., FAAN, said. “It’s a joyous occasion for their friends and family. When Devin asked if he could take a few minutes to propose to Leianne, it was a natural fit to this happy occasion.”

Del Rio walked ahead of Maugeri and turned around, got on one knee and showed her the engagement ring.

“Of course, I said yes!” Maugeri said. “I admire this man so much and am honored to spend the rest of my life with him.

“It is crazy to think of all that we have endured together over the last four years — from serving as active-duty flight paramedics to graduating this nursing program together. It’s a wonderful thing to have gone through so much with my very best friend. I feel incredibly blessed.”

“We are very proud of our Veteran to BSN program and what it does for veterans who risked their lives to save ours in service to our country,” Dean Evans said. “The VBSN program helps veterans who served in a health care capacity by offering an accelerated path to acquiring the BSN and sitting for the licensing examination.” 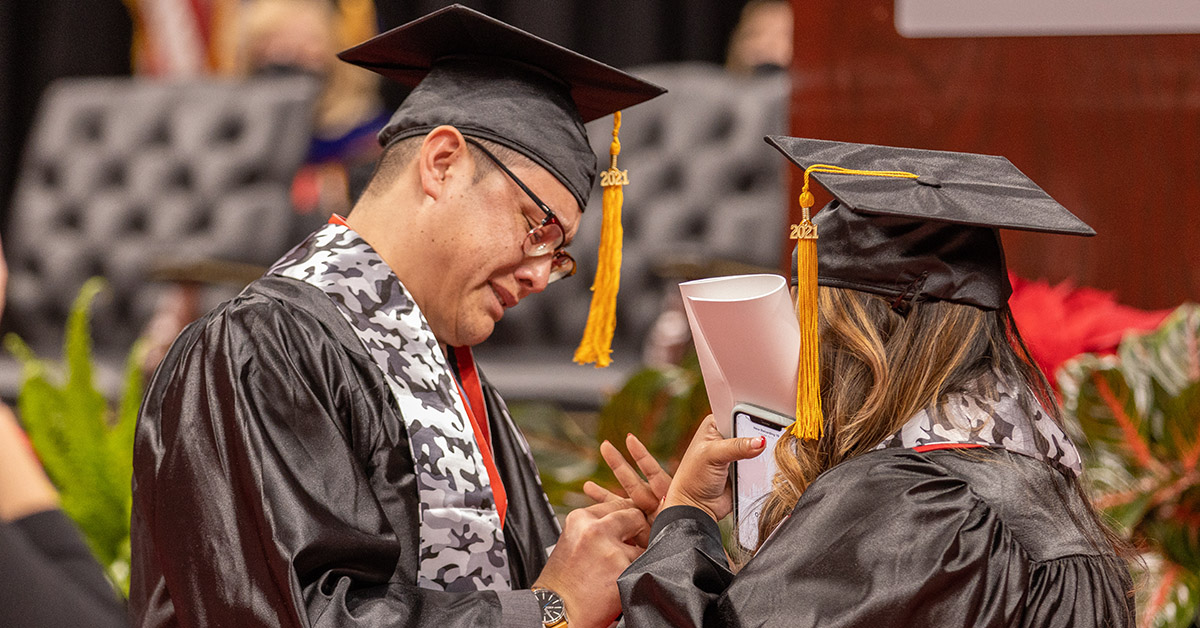 After hearing about the VBSN program from a mutual friend, Del Rio and Maugeri each decided it was the next step in their career because they had the required education and experience.

“Completing the program in one year was a bonus,” Del Rio said. “Leianne has the better grades, hands down. She’s smarter than me by far. How she ended up with me, I don’t know. But I do thank my lucky stars for it. Sometimes it’s better not to question.”

Maugeri praised the VBSN program also for considering veterans’ medical background and the School of Nursing’s faculty and staff.

“This is the most veteran friendly nursing program I have ever heard of,” Maugeri said. “This is the first and only program that considered our 9+ years of experience in trauma and emergency medicine. This fast-paced environment is something we’ve become accustomed to through the military so it definitely stood above the rest.”

She recommends the program to other military veterans, especially for its expedited timeline.

“You won’t have any regrets and it will be over before you know it!” Maugeri added. “This program is truly one of a kind and absolutely made for veterans.”

If graduation is the first step to that 1,000-mile journey, then it’s a good idea to have company, especially someone who brings out the best in you. 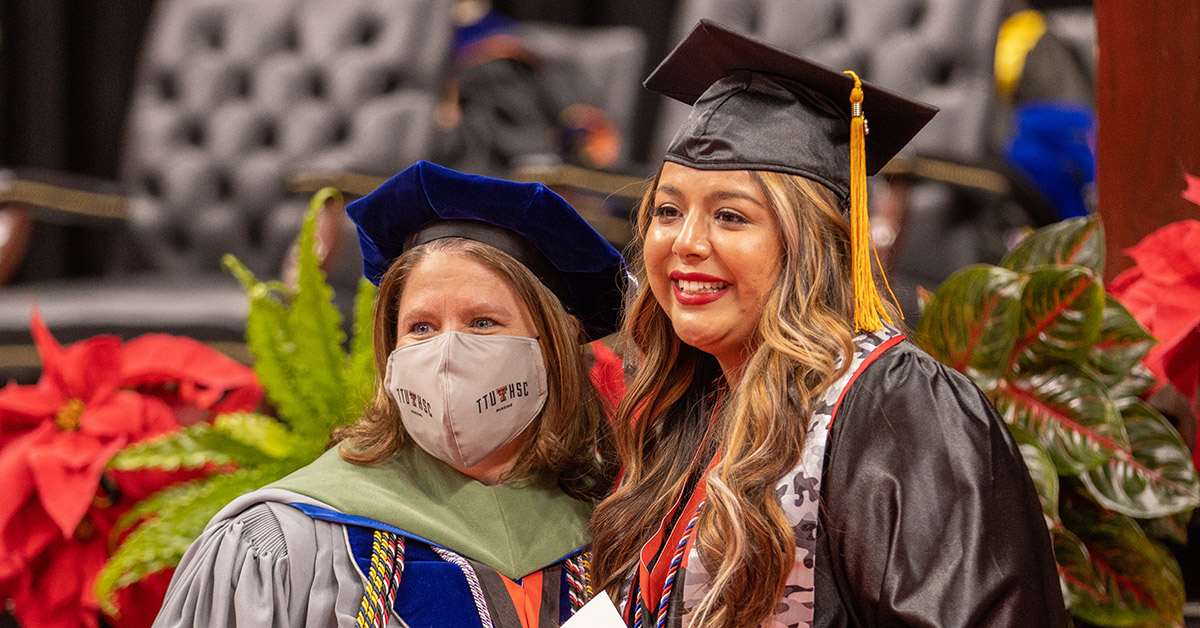 “She has the presence about her that lights the room,” Del Rio said. “Me coming from the past I had, I had never seen such a presence and with her light came maturity, growth, positivity and everything else I needed to become the man I am today. That’s not something you find every day. Living with her these last four years is what has made me sure now more than ever.

“Thank you, Leianne, for bringing out the best in me. Know that no matter what happens between us, I’ll always love you for the stability you’ve brought to this rocky world of mine. So long as I live, I’ll continue to give you the world.”
After a whirlwind weekend traveling back and forth from San Antonio to Lubbock, graduating and becoming engaged, Maugeri took time to reflect on her past experiences and plans for the future.

“I just wanted to thank the TTUHSC faculty and everyone who made this moment happen,” Maugeri said. “This was more than I ever dreamed of, and for that I will be forever grateful. Thank you, Devin, for showing me what it’s like to feel undoubtedly loved and cherished.”

The couple plan to stay in the San Antonio area.

SNMA celebrated diversity and raised more than $97,000 with the Night Under the Stars 13th Annual Scholarship Gala on Dec. 3.

On October 15, the Office of Interprofessional Education (IPE) hosted the Interprofessional Toy Fair and Expo, created for children ages 0-3 who receive early intervention services for developmental delays and disabilities.

The heroic actions of John Cheng, M.D., saved dozens of lives on May 15, 2022. At the TTUHSC Distinguished Alumni Awards, Cheng’s wife Elise was presented the first TTUHSC Presidential Award for Heroism.