TTUHSC Clinic an Important Resource for Underserved and Uninsured 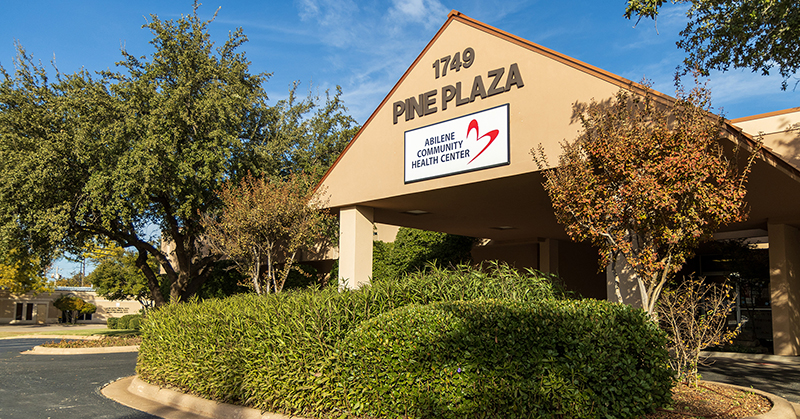 A1C, a type of hemoglobin in the blood that binds with sugar, acts as a marker for Type 2 diabetes. When a physician conducts an A1C test, the results provide a window through which the patient’s average blood sugar level, or the percentage of their hemoglobin that has bonded with sugar over the preceding 60-90 days, can be viewed. The higher a patient’s A1C, the higher their odds of having or developing diabetes.

When Jane (not her real name) was released from prison, her A1C was well above the range considered to be safe. Through a series of referrals, she eventually made her way to the Abilene Community Health Center (CHC), which is part of the Texas Tech University Health Sciences Center School of Nursing and an extension of the school’s Larry Combest Community Health and Wellness Center.

“With our nurse, prescription assistance program, pharmacists and case manager’s help, we were able to bring that patient in and educate her,” Cynthia Stevens, DNP, R.N., said. “We continued to bring her back in every few weeks, then every month and then as needed. We reduced her risk of diabetes and her hemoglobin A1C is now well controlled.”

Stevens, senior director for the CHC, said Jane represents the type of success story the clinic has worked toward since it opened as a Federally Qualified Health Center (FQHC) five years ago.  FQHCs are community-based health care providers funded by the Health Center Program, which was established by the U.S. Health Resources and Services Administration (HRSA) to provide primary care services in underserved areas.

Before the CHC opened, Abilene was the only community in Texas with more than 100,000 people and no FQHC. Stevens said the city conducted a needs assessment and determined its underserved and underinsured population needed better access to care, including mental health services.

“Not only are they a part of our medically fragile population, but they are patients who don't have any other place to go,” Stevens explained. “We have patients who have Medicaid or Medicare, so it's not just the uninsured but the underinsured, too. Some also have private insurance, but may have really high deductibles that they cannot afford.”

During its first month in operation, the five-member CHC staff, which included one nurse practitioner, one RN and one LVN, saw approximately 75 patients. By the end of their first fiscal year (2015-2016), the clinic had added personnel and logged 2,646 visits from 1,236 patients.
Today the CHC has an 18-member staff that includes a medical director, four providers, three RNs (including Stevens), a clinical nursing assistant, three LVNs, one full-time and one part-time behavioral health specialist, three front office staff and two pharmacists.

Adding providers helped the clinic increase its patient volume and Stevens said they currently see up to 800 patients a month. During the most recent fiscal year that ended in August, the CHC received 7,858 visits from 2,922 patients. Due to COVID-19, they also increased their televisits through the use of Zoom and QliqSOFT, which is another software that allows patients to visit their CHC provider on a smart phone.

“We have a lot more options now,” Stevens said. “With the pandemic, we never ceased operations; we haven't closed yet and we've been healthy, practice wise. At the beginning of the pandemic we saw an increase in numbers, and then a decline of 75 to 100 patients because they were more aware of the risk and they didn't want to go out. Now that safeguards are in place we've had more patients coming in to the clinic for routine care.”

Stevens said the ACHC strives to provide a patient centered clinic where everybody feels more like family. The goal is to make patients feel like they’ve found a medical home and a primary care provider.

“We're not a walk-in clinic; we want you to come back so that we can take care of you for the long haul,” Stevens added.

Stevens said the typical patient is a middle-aged adult that has never visited a health care facility, or if they have, they may have left unhappy or lost track of their preventive care. Many are seeing a provider for the first time, and some have had a recent event in which a family member or friend has been diagnosed with a severe illness like stroke, hypertension or heart disease.

About 40% of the clinic’s current patients are classified as self-payers though they have no ability to pay. Those patients are placed on a sliding fee scale and the maximum the ACHC can charge them is $20 plus the cost of testing if the patient does not have an income.

“We tell them, ‘We'd like to collect the copay plus the cost of any labs or meds we gave you today,’ but if they can't pay it, we don't turn them away,” Stevens stressed. “We set up payment plans and work with the patient to make payment possible”

Abilene is a diverse community and there are CHC patients who speak languages like Swahili, French and Kirundi. Those are the people who are most likely to have never had an immunization or screening procedures like a mammogram, a Pap smear or a PSA test. Stevens said the CHC is fortunate that one of its providers, Thaddee Uwimana, FNP, speaks eight different languages and can communicate effectively with those patients.

“He came into the United States as a refugee and he's able to provide really good care to that population that would have probably never gone for health care or preventative care,” Stevens said.

Abilene also has a large Spanish speaking population, and Stevens said the CHC has several strong Spanish speakers, including a person at the front desk, a nurse and a provider. They also have access to the only Spanish-speaking counselor in the Abilene area. Being able to overcome those language barriers has helped the CHC attract more patients, but they also rely on word-of-mouth advertising. Referrals come from the local health department, local hospitals and behavioral health programs. The clinic also tries to stay involved with the community by participating in health fairs, cost-free screenings and events like Abilene’s annual Business Mercado.

“Our goal is to provide education, get them on medication if they need something for blood pressure or cholesterol, screen them for all the disease processes that put patients at really high risk, give them an opportunity to see an in-house counselor if need be, and then go from there,” Stevens said.

Through all the screenings, immunizations and prescriptions Stevens said education may be the most important service the CHC provides to its patients, especially those who have relocated to Abilene from other countries.

“When Thaddee came to work for us, he would tell me, ‘These patients aren't going to come back because they only go to the doctor if they're very, very sick.’ Those are the patients we have to educate really well on prevention,” Stevens said. “If we give you a 30-day supply of high blood pressure medication, you're going to have to refill it. We also may have to teach them what a refill is and that this is medication that you have to constantly be on; it's not a one time thing.”

If the patient doesn't buy in to the treatment plan, then the CHC can only do so much to help. Stevens said that point is magnified in patients like Jane who take ownership of their health situation and are willing to help themselves.

The CHC pharmacists use a white board in their pharmacy room to list patient’s highest A1C test result and track their progress as they continue treatment. Stevens recalls how satisfying it was to see Jane’s results after each visit to the clinic. Today her blood pressure and diabetes are under control.

“For somebody who came out of prison and had no intention of ever doing anything for herself to be proud of, it's been very special for her,” Stevens said. “She's one of those patients that we truly feel like everything in the clinic worked for her. The team worked to get her to where she needed to be: the nurses, the providers, pharmacists and the counselor. She's one of those highlights, and we hope everybody that comes into the clinic actually benefits from it.”