Treating Tinnitus: Making Ringing in the Ears a Non-Issue

Written by: School of Health Professions 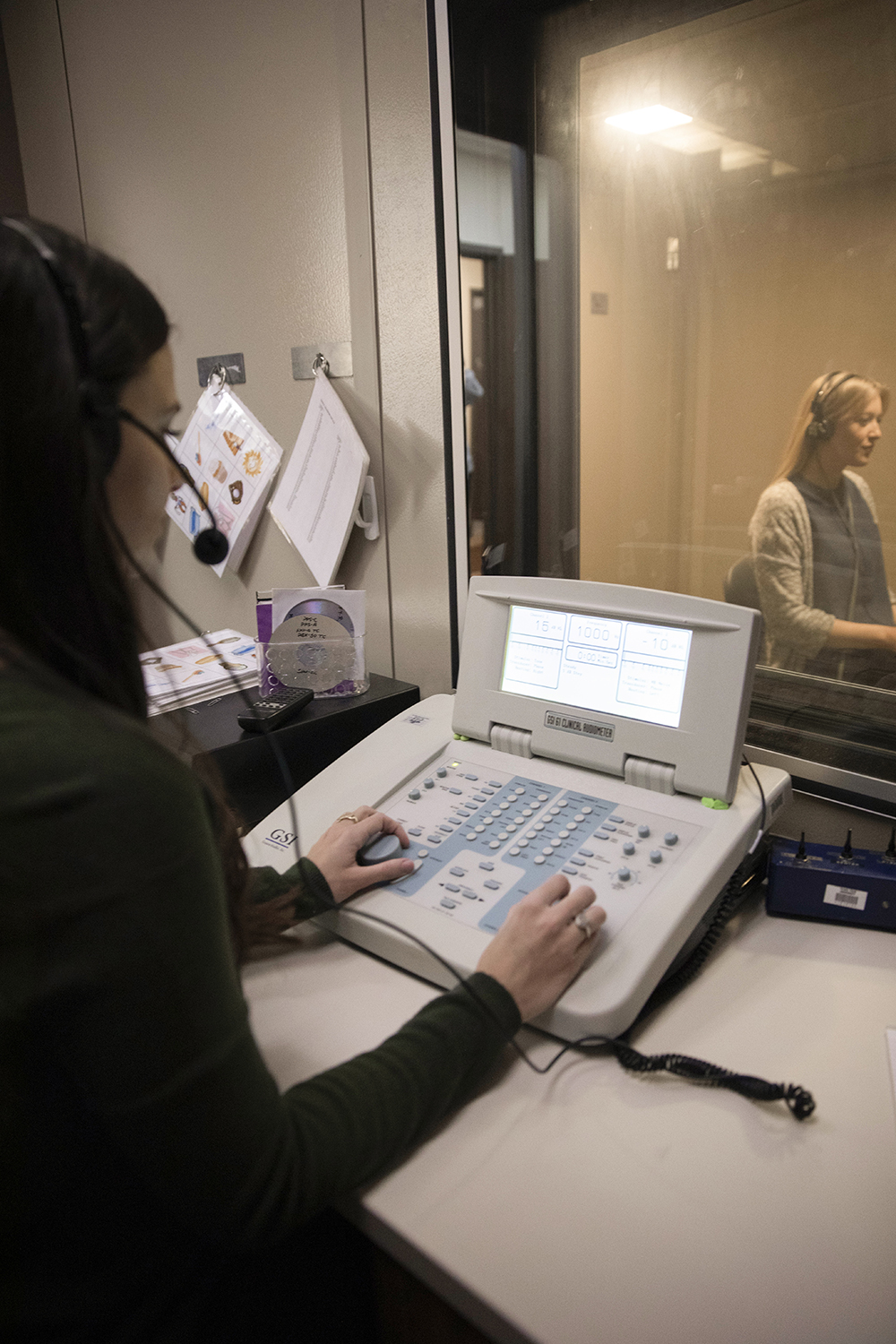 Even among her fellow audiologists at Texas Tech University Health Sciences Center’s School of Health Professions (TTUHSC SHP), Dr. Tori Gustafson has a somewhat deeper understanding of tinnitus than most people. After contracting mumps as a three-year-old child, Gustafson lost her hearing on one side and as a result, has lived with tinnitus for most of her life.

Gustafson explains that tinnitus is a much-misunderstood complaint, most commonly associated with hearing loss but which can also be caused by a metabolic disorder like high blood pressure or diabetes, or as a side-effect of certain medications.

“Tinnitus is the perception of sound, often ringing in the ears but it could be other sounds like roaring or buzzing when there isn’t anything making a sound,” says Gustafson. “The biggest thing for sufferers to remember is that tinnitus is a symptom, not a disorder or disease itself.”

The onset of tinnitus can be a frightening experience.

“It usually scares people because they don't know why they're hearing that sound,” says Gustafson. “The first thing they should do is go to their doctor and have a physical. They should take in a list of any medications they are taking — both over the counter and prescription — and ask ‘Is this making my ears ring? Is my blood sugar OK? Is my blood pressure OK?’”

If a doctor finds a medical reason for the onset of tinnitus, they may be able to make improvements by treating the root cause. However, if the tinnitus is caused by hearing problems it cannot be treated. Instead, with the help of an audiologist, they must learn to live with the condition and make it a “non-issue.”

“One of the first things we do is to explain what tinnitus is,” says Gustafson. “What has usually happened with a hearing loss is those little sensory cells in the inner ear have died for whatever reason. Those sensory cells are supposed to send a signal to the nerve whenever they hear something and that nerve sends that signal on to the brain. In the same way that someone who has lost a limb might experience phantom pains from their missing limb, the nerve for hearing thinks it should continue to send signals to the brain. So it’s there and it doesn’t really go away completely but if you learn what it is and understand that it’s not as big of an issue as you initially thought, you can manage it.”

The next stage of treatment involves direct counseling.

“We talk about what’s causing it and what triggers make it more noticeable,” says Gustafson. “That way, we can help them learn to ignore it. If we can give them something else to focus on, they are not going to notice their tinnitus so much. For instance, you don't hear your refrigerator running anymore because you know it’s there. If you stop and listen for it you can hear it but otherwise, you don't.”

According to Gustafson, this approach works for about 80% of tinnitus sufferers.

“There are people for whom it is more intense,” says Gustafson. “For those people, we might look at giving them a constant sound to listen to and that's when we use a re-training device. It’s something like a hearing aid, or if they have hearing loss you can add it to their hearing aid and make it another program on the device. It just makes a very quiet sound that they listen to. So you can either make it loud enough so that it covers the tinnitus up, or actually have the tinnitus and that new sound together so you can listen to that and say ‘OK, this is the sound but the tinnitus is part of it.’”

With enough training, a sufferer can remove the re-training device and call-up that sound from memory in the event of something like too much caffeine or stress triggering their tinnitus.

“It’s like being in a happy place in your mind,” says Gustafson. “You call up that sound and now it’s no longer an issue because you've controlled it. You turned it up, and you turned it down.”

Where do Audiologists Work With Patients?

Audiologists work with tinnitus sufferers across a range of settings including private clinics and physicians’ offices. They are also employed by industries where employees may be exposed to loud noise and in organizations like the U.S. Department for Veteran’s Affairs (VA).

The Bureau of Labor Statistics (BLS) reports that the median annual wage for an audiologist is $75,920. Job prospects are good with a projected 16% job growth by 2028, much faster than for other occupations.

To learn more about TTUHSC SHP's Doctor of Audiology program or to speak with a member of our faculty, please visit the program page on our website.

The School of Health Professions offers 19 different academic degree programs, making it one of the most diverse schools of health professions in the nation.

Among the Texas Tech University Health Sciences Center campuses of Amarillo, Lubbock, Odessa and Midland with opportunities in distance learning, our programs are divided among specialties in Laboratory Sciences and Primary Care; Speech, Language, and Hearing Sciences; Rehabilitation Sciences; Health Care Management and Leadership; and Clinical Counseling and Mental Health.

Led by top researchers and clinicians, our faculty provide challenging educational opportunities for our students to excel in their fields.