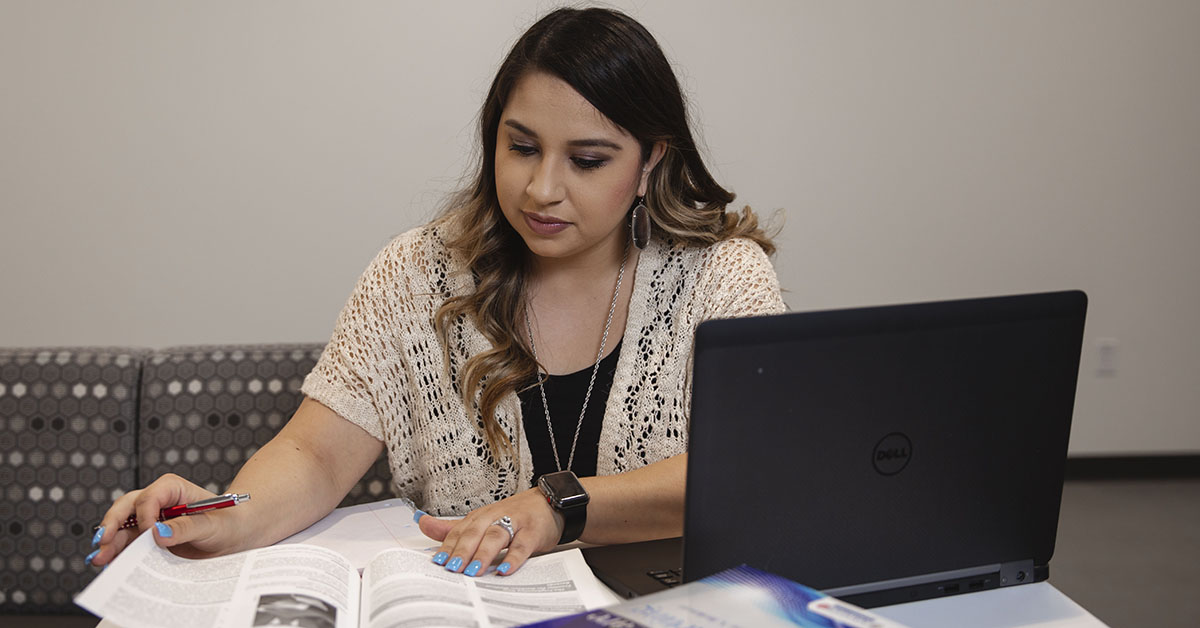 The rehabilitation science field, which encompasses disciplines like physical therapy and speech-language pathology, is a segment of health care that pays particular attention to word choice, both for better patient communication and as a form of advocacy. Choosing the right words — words that put the patient first — can play a big role in patient-centered care in the rehabilitation science field. And it’s where using person first language becomes especially important.

What Is Person First Language?

“To me, it’s language that emphasizes the person,” says Melinda Corwin, professor of speech-language pathology at Texas Tech University Health Sciences Center School of Health Professions (TTUHSC SHP). “Person first language is about the patient’s identity rather than their condition or disability.”

The importance of person first language has become more widely recognized and adopted over the past few decades. One factor influencing the increased usage in health care (and beyond) is that it’s the preferred approach of language-governing organizations that, among other things, help set standards for how we communicate.

Rehabilitation science and other health professions typically refer to the American Psychological Association (APA) style guide. “There’s an entire chapter about bias-free language, and a section of that is dedicated to person first language,” Corwin says of her most recent edition of the APA manual. In fact, the APA introduced bias-free language in 1992.

APA style is not only what Corwin and her colleagues follow when writing articles to submit to academic and medical publications; it’s also the style guide to which undergraduate and graduate students must adhere. So, by default, following the industry-standard writing rules also helps reinforce and promote the adoption of respectful language. Style guides employed in other fields, including Modern Language Association (MLA), Associated Press (AP) and the Chicago Manual of Style, all address bias-free writing in some way as well.

These language standards have also influenced the development of textbooks used in health care education. Corwin says that most of the rehabilitation science textbooks she’s seen published within the past decade use person first language. This makes for a more seamless transition in teaching these “new” rules in classroom and clinical settings.

Person First Language as an Industry Best Practice... or Law

A few initiatives from national and global health care organizations have helped standardize the language used in the medical field. Corwin mentions the World Health Organization 2002 release of the International Classification of Functioning, Disability and Health (ICF). In an introduction to using this guide, WHO says, “ICF is named as it is because its stress is on health and functioning, rather than on disability. Previously, disability began where health ended; once you were disabled, you were in a separate category.”

Many other professional societies encourage their member practitioners and professionals to use person first language. The American Psychological Association, the Centers for Disease Control, American Society of Addiction Medicine, United Spinal Association, Obesity Action Coalition, American Academy of Orthopedic Surgeons, and the American Medical Association all encourage their members to use people first language; sometimes it’s even addressed in an organization’s bylaws.

In addition to adoption by professional organizations and inclusion in journalism and academic writing style guides, this broader commitment to person first language can also be found in updated laws, bylaws, ordinances and other legal documents at the local, state and national levels. For example, the Council of the District of Columbia adopted the People First Language Modernization Act of 2006, which requires local lawmakers to use respectful language when referring to people with disabilities in new and revised regulations and publications. Many other organizations and communities have made person first language the standard in their official communication; as cultural perceptions continue to shift and collective understanding grows, more will follow.

The cultural shift toward inclusive language and the health professions’ response to it has naturally made its way to health sciences training programs.

Corwin says TTUHSC’s rehabilitation sciences programs teach, model and reinforce person first language in many ways, from patient interaction to behind-the-scenes reporting. As she mentioned, students absorb examples of how to refer to a disability as they read assigned textbook chapters or journal articles.

When students participate in clinical experiences or start their rotations, they’ll have a chance to hone these skills. And before that, in-class scenarios give students a chance to practice patient communication. A big part of that is showing students how to use the right words. She offers two examples of language choice: “Mr. Jones uses a wheelchair” versus “Mr. Jones is confined to a wheelchair.”

“The first is more empowering. It’s descriptive without judgment,” she explains. “The other is more negative and condescending.”

The use of bias-free language extends beyond in-person patient interactions to rehabilitation therapy sessions, conferences with family members, even school exams and papers. Corwin says her department also “tries to reinforce person first language in clinical report writing.” So, it’s not just what is said, but also what is recorded and shared with others.

Collaboration across the many unique health disciplines has also played a role in helping to instill person first language as a norm.

“One of the most powerful things we’ve done, especially in the past five years, is incorporate interprofessional education (IPE) and interprofessional practice,” says Corwin. This involves bringing together students from various health science disciplines — medicine, nursing, audiology, physical therapy, and speech-language pathology for example — and encouraging them to work as a team on a patient scenario. She says the IPE experiences provide opportunities for students to use bias-free language as they describe patients or discuss treatment plans.

“Our goal is to model person-first, patient-centered care,” Corwin says.

TTUHSC’s rehabilitation science programs embrace the person first language approach for many reasons, not the least of which as a way of teaching students to advocate for patients. The positive language aspect of a patient-centered model of care lends itself well to patient advocacy. This starts with focusing on the person, not the disease or condition.

To illustrate, Corwin shares another example of what not to say. For instance, person first language would not refer to a patient as “an aphasic.” Instead, “He’s a person with a condition called aphasia,” she says, offering a better alternative that is both more positive and describes the person in a less victimized way.

Corwin shares another example of how language can diminish or empower human identity. “We shouldn’t say a patient ‘suffers from’ something. They are not victims; they are individuals with a condition or differing ability,” she explains. “Remember — they are a person first.”

Corwin has dedicated much of her career to working with patients in stroke recovery, many of whom are unable to communicate verbally.  “If they aren’t able to speak for themselves, we can speak on their behalf,” Corwin says. “And by choosing person first language, we are advocating for them.”

Corwin says this type of patient advocacy is extremely important in an increasingly interprofessional health care environment and it reinforces why IPE provides crucial and practical learning experiences for students. She uses an example of a physical therapist (PT) who is part of a patient’s health care team and who, for compelling reasons, doesn’t completely agree with a physician’s recommendations for treatment.

“With a patient-focused approach to health care, that PT might be less afraid to speak on behalf of their patient, more likely to advocate for that patient,” she says, adding that person first language contributes to this confidence. “It’s about being brave enough to find your voice to put the patient at the center of care.”

Appropriateness of many terms and phrases changes over time. When we don’t keep up, we run the risk of hurting others in profound and long-lasting ways.

The advocacy group, The Arc, promotes the rights of people with intellectual and developmental disabilities. They explain, “The language a society uses to refer to persons with disabilities shapes its beliefs and ideas about them. Old, inaccurate, and inappropriate descriptors perpetuate negative stereotypes and attitudinal barriers.”

The APA, in its style guide, says, “Just as you have learned to check what you write for spelling, grammar and wordiness, practice reading your work for bias.” Other reminders and tips for thinking person-first as we speak or write include:

●Emphasize abilities, not limitations.
●Avoid emotional words that imply tragedy or evoke pity.
●Refer to a person’s disability only when relevant.
●Don’t use slang.
●Stay up to date with acceptable terms.

All of this can be easier said than done for someone who’s adhered to one way of speaking and writing that may not have evolved with changes in our culture and understanding. Corwin says she’s surprised by the number of times she’s heard health professionals using outdated terms as she’s perusing interviews or educational material on YouTube.

Clinicians like Corwin believe that new cultural norms can and must be established in the health care professions. As education programs like the rehabilitation science programs at TTUHSC School of Health Professions commit to teaching and modeling person first language, the next generation of practitioners will integrate it into their practice, perhaps empowering their more-seasoned colleagues to break old habits.

Language evolves, and the medical field is no exception. There are scores of once-acceptable terms and words that we wouldn’t imagine using today. As person first language moves into the mainstream, we’ll discover how our words can contribute to a more accessible, people-friendly world.

As Corwin says: “In order to promote health, we need to promote people.”

You can learn more about careers in the speech, language, hearing, movement or rehabilitation sciences on our various program pages. One advanced degree that combines aspects of these areas is the Ph.D. in Rehabilitation Science, which offers concentrations in either communication or movement disorders.