It's Not Just About Winning: Athletic Trainers as Health Care Providers

Written by: School of Health Professions 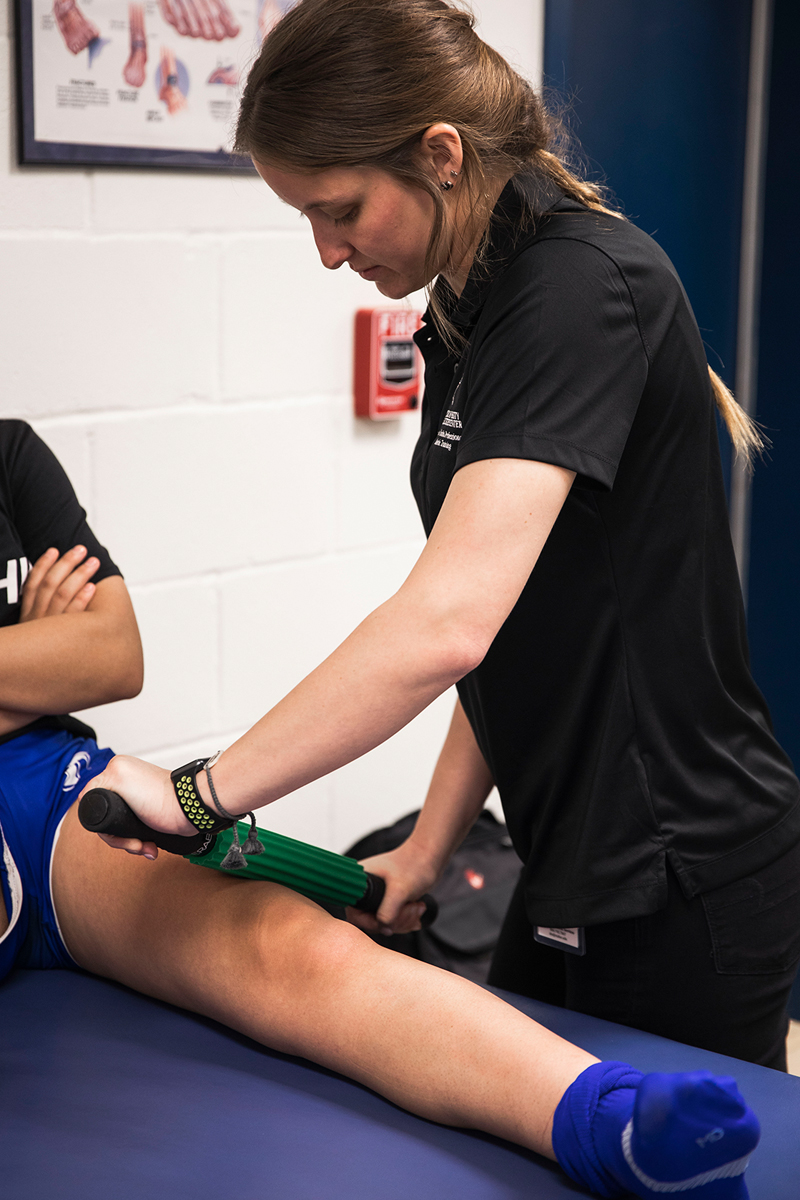 Athletic training is one of the more rapidly growing professional fields today, and offers motivated individuals fulfilling careers working with athletes at every level of competition.

At the same time, athletic training is also a relatively young profession that is still misunderstood on a lot of levels, primarily when it comes to what sets it apart from other fields like personal training, physical therapy, and occupational therapy.

For anyone considering the profession, the most important thing to understand is that, in today’s world, the athletic trainer is a highly-educated and well-trained member of the health care system. Athletic trainers have a very real and direct impact on the health and lives of athletes and others with whom they work. And they spend years and devote extensive hours to the education and training it takes to become a nationally certified athletic trainer with the widely accepted and respected ATC credential.

Many years ago, Dr. Toby Brooks, associate professor in the Master of Athletic Training Program at the Texas Tech University Health Sciences Center School of Health Professions (TTUHSC SHP), gained a deep understanding of just how serious the need for athletic trainers is and the impact they can have.

Growing up in Illinois, Brooks was an avid basketball player. When he was in high school and a member of the basketball team, he sustained a serious knee injury, tearing his anterior cruciate ligament (ACL). His community was very small and didn’t have the kind of medical resources typically necessary to deal with that kind of an injury.

“We lived in a very small town in rural Illinois,” Brooks says. “We didn’t even have a physician’s office in the entire county, much less the services of an athletic trainer. Dealing with that injury and working through my recovery was a struggle. The management of my injury was handled pretty poorly and as a result, it took a lot longer than it really should have.” 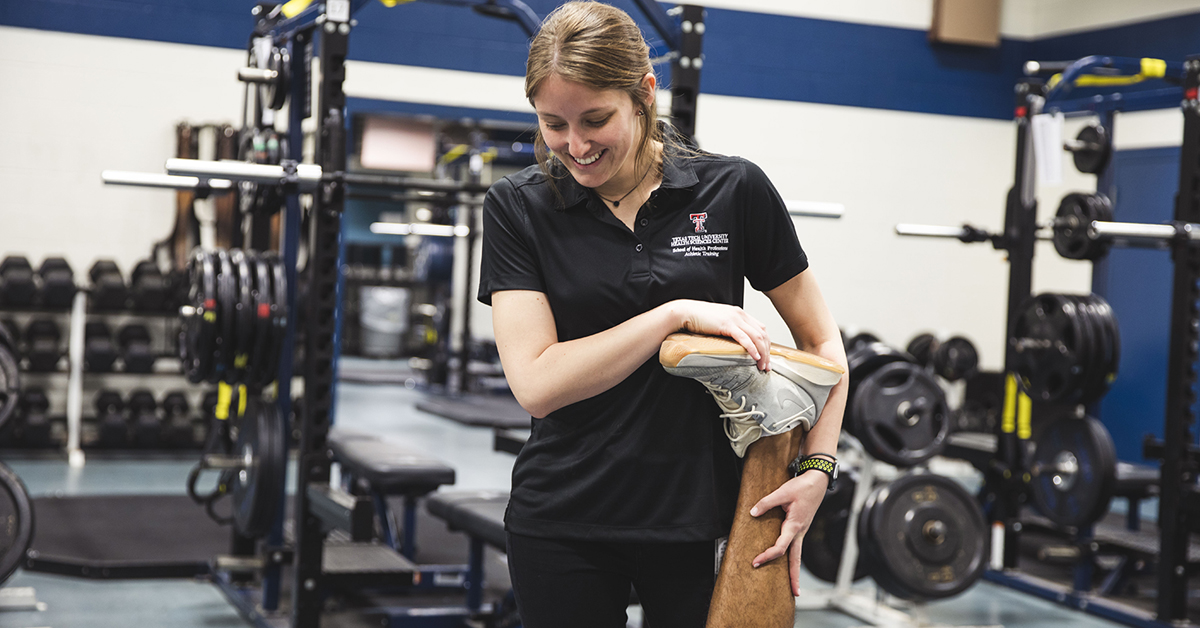 When he was a freshman in college at Southeastern Illinois College, he discovered the field of athletic training. “I was drawn to it because I saw it as a way to give athletes and others the kind of help I wasn’t able to get recovering from my own injury. I wanted to do what I could to make sure they avoided the kind of experience I had,” he says.

Brooks went on to earn his master’s and Ph.D. In the years since, he has gained an exceptional reputation as an athletic trainer, thought leader and educator, earning the TTUHSC Student Government Association’s Outstanding Faculty Award in 2013, 2014, 2015, 2016, and 2019.

“The field of athletic training is still relatively young and as a result, there can be awareness issues and misperceptions about what it is we really do,” Brooks says. “People often think there’s no difference between athletic trainers and personal trainers, and that’s something we continue trying to clarify because there are a lot of big differences. Personal trainers are more of a fitness-oriented profession where athletic training is more of a medically-oriented profession.”

Athletic trainers spend more time working with patients and put much more emphasis on injury prevention. “We’re there with the team, we do functional assessments, flexibility, screening, uncovering a person’s particular weaknesses and addressing that,” Brooks says. “We have to be aware of a person’s injury history and conduct pre-participation physical assessments to fully understand where a greater potential for injury might be. So even if it’s not bothering them at the moment, we know it still could be problematic and work to address that.”

One initiative that’s been underway to dispel misperceptions is an ongoing effort to work with media and television broadcasters. “There’s been an effort to have media and commentators on TV refer to us as an athletic trainer, not just trainer,” Brooks says. “That’s a big part of the misperception — when broadcasters make a reference to a ‘trainer’ helping with an injured player. If a student comes into our program using just the word ‘trainer’ they get corrected pretty quickly.”

Clearly, when one thinks about athletic trainers and the work they do, the immediate impression that comes to mind is working with athletes on injury prevention, recovery, and management. But there are other types of settings in which you’ll find athletic trainers working.

“Athletic trainers have a very versatile skill set,” Brooks says. “They work for professional and collegiate organizations, high schools and in middle schools with clients as young as 6th and 7th grade. They also work in military settings, that’s been an emerging field. I have a former student who now is working at Quantico with the Navy Seals. He trains with them and if injuries happen, he’s there to render care, almost like a combat medic. An injury is an injury. A sprained ankle doesn’t know if you’re a quarterback or a soldier.”

Additionally, there are other types of career fields that don’t involve the prevention and treatment of injuries but still offer a relevant professional path for those who have a background in athletic training.

“Some of the peripheral fields that a skill set in athletic training can be applied to include areas like pharmaceutical sales, medical device sales, brace sales reps, sports performance, speed and agility, strength and conditioning,” Brooks says. “There are a lot of different paths you can take.”

Brooks adds that, while a career as an athletic trainer can be very fulfilling and rewarding, there are some realities of the profession that prospective students should consider when deciding if it’s the right path for them.

Many future athletic trainers dream of landing a position with a professional sports team or a major collegiate program where they would work with world-class athletes. And TTUHSC SHP is known across the country for producing graduates who accomplish just that. Those types of positions can be very time-intensive, requiring extensive hours both during the week and on weekends when games are played, as well as in the evenings.

Still, says Brooks, the excitement of working in those types of settings usually far outweighs the time demands of the job.

The Master of Athletic Training Degree Program at TTUHSC SHP

For those who determine that a career in athletic training is the best fit for them, the Master of Athletic Training Program at TTUHSC-SHP offers a great pathway to the career.

TTUHSC SHP was among the first master’s in athletic training degree programs in the country, and to this day, remains one of the most well established and respected. By focusing on providing a graduate-level education to its students, the program ensures a heightened level of education and training, making graduates more marketable throughout the country.

In contrast to most other athletic training programs that are housed in departments more closely related to athletics and coaching, the TTUHSC program is one of the nation’s first to be housed in a school of health professions, underscoring the role of athletic trainers as highly-skilled health care professionals.

This also positions athletic training students at TTUHSC SHP to take advantage of the wealth of resources provided by the TTUHSC School of Health Professions. One of those resources is a state-of-the-art lab facility that recently underwent a $750,000 renovation and offers the most modern learning resources and technology in health care training.

Another significant benefit at TTUHSC SHP is that the program is aligned with a major NCAA Division I athletic program, the Texas Tech University Red Raiders. As a result, students in the program work with some of the most elite college athletes and coaches in the entire country and enjoy the facilities, resources and learning opportunities provided by a major college athletics operation.

The master’s in athletic training program also prides itself on how closely it works with other related programs within the university, such as physical therapy and occupational therapy. Brooks says that at many other institutions this kind of collegial relationship between programs doesn’t exist. “Our programs work together and respect each others’ work,” Brooks says.

This approach includes exchanging guest faculty lecturers between programs, engaging in interdisciplinary projects, and leveraging the strength of one of the best rehabilitation centers in the country.

With cohorts numbering around 25 students, the TTUHSC SHP program is one of the largest of its kind in the country. But while it’s a relatively large program, each student benefits from highly individualized instruction and attention. The program’s four full-time faculty are actively engaging as professional athletic trainers, and as a result, bring to their students the most current and relevant knowledge and experience into the classroom and lab instruction.

In the last year in the program, students complete their required course work in 10 weeks during the second semester and then spend the final six weeks in an immersive clinical training experience where they apply all of the knowledge and skills they’ve learned.

“We’ve had students take part in these experiences with the Boston Red Sox, the Anaheim Angels, and MLS soccer teams, to name just a few,” Brooks says. And very often, he adds, these clinical training experiences can lead to a full-time job offer as an athletic trainer after the student graduates.

Once students graduate from the program, they sit for the national Board of Certification (BOC) exam to earn the ATC credential. From there, they can move on to other states where they’d like to practice and apply for a state license, which is typically a fairly straightforward process.

Many graduates of the program also prefer to stay in Texas and West Texas to practice, and for good reason. “Athletics is a huge deal in Texas and in West Texas,” Brooks says. “The athletic trainer position is widely respected throughout the state. Most every high school in the Lubbock area has at least one athletic trainer, and some have as many as four.”

For more information on the TTUHSC-SHP Master of Athletic Training Program, email us at  health.professions@ttuhsc.edu, call (806) 743-3220, or visit the Program’s page on our website.

The School of Health Professions offers 19 different academic degree programs, making it one of the most diverse schools of health professions in the nation.

Among the Texas Tech University Health Sciences Center campuses of Amarillo, Lubbock, Odessa and Midland with opportunities in distance learning, our programs are divided among specialties in Laboratory Sciences and Primary Care; Speech, Language, and Hearing Sciences; Rehabilitation Sciences; Health Care Management and Leadership; and Clinical Counseling and Mental Health.

Led by top researchers and clinicians, our faculty provide challenging educational opportunities for our students to excel in their fields.