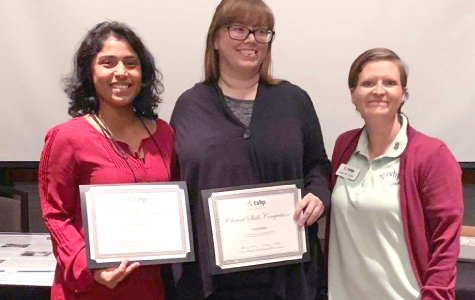 A pair of teams from the TTUHSC Jerry H. Hodge School of Pharmacy made a strong showing at the Texas Society of Health-System Pharmacists (TSHP) Annual Seminar April 12-14 in Frisco, Texas. The annual event is the largest educational and networking meeting for Texas pharmacists, students, technicians and industry professionals.

Gaddis said she and John were both proud and surprised by their first-place finish.

“We thought we did okay and hit the major points,” Gaddis said. “However, when the case was broken down after the competition, we found we missed a few findings, so we were happy to be declared winners.”

Gaddis said this was not the first time she and John competed together. In fact, their partnership began soon after they began pharmacy school in 2017. They reviewed the competition rules, studied a few cases from past national clinical skills competitions and then started entering competitions together. Their first success came in late 2017 when they were named the top P1 team in the local clinical skills competition conducted by the Double-T Student Society of Health-System Pharmacists in association with the American Society of Health-System Pharmacists.

“Competing is good practice, so we've done two school competitions and now the TSHP contest,” Gaddis said. “We've found that the cases in the clinical skills competitions really help us hone our knowledge from pharmacy school and refine our own clinical skills. It also allows us to apply our classes in 'practice' and helps us to identify the major issues and other important patient conditions that need to be addressed.”